Tori and Noah spent their romantic spring engagement session walking along a serene creek in Austin. The green and seafoam shades made the photos feel whimsical as they walked along the grassy fields that surrounded the water. We know that their story and photos will make you feel as peaceful and blissful as they look in these photos. 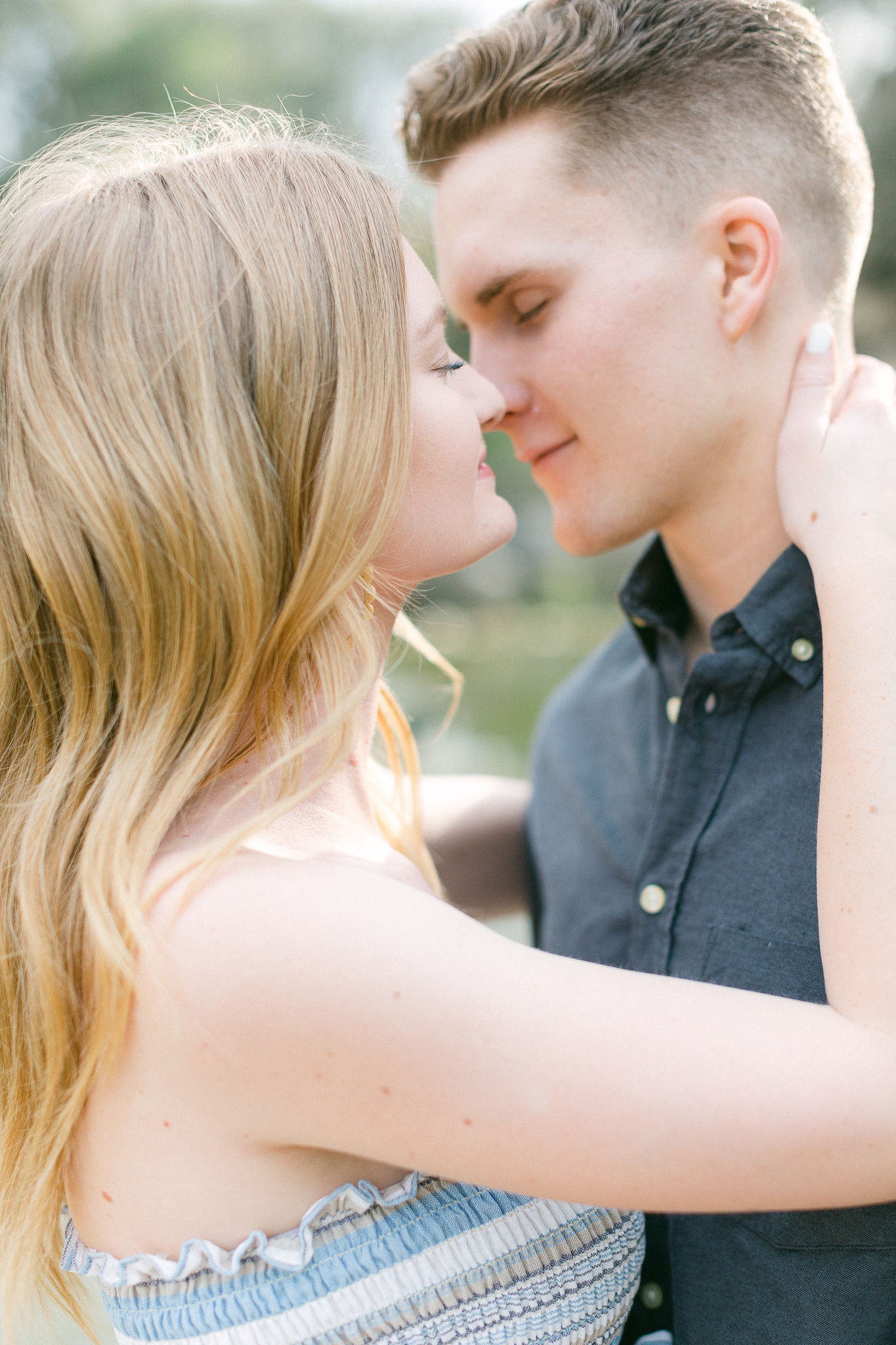 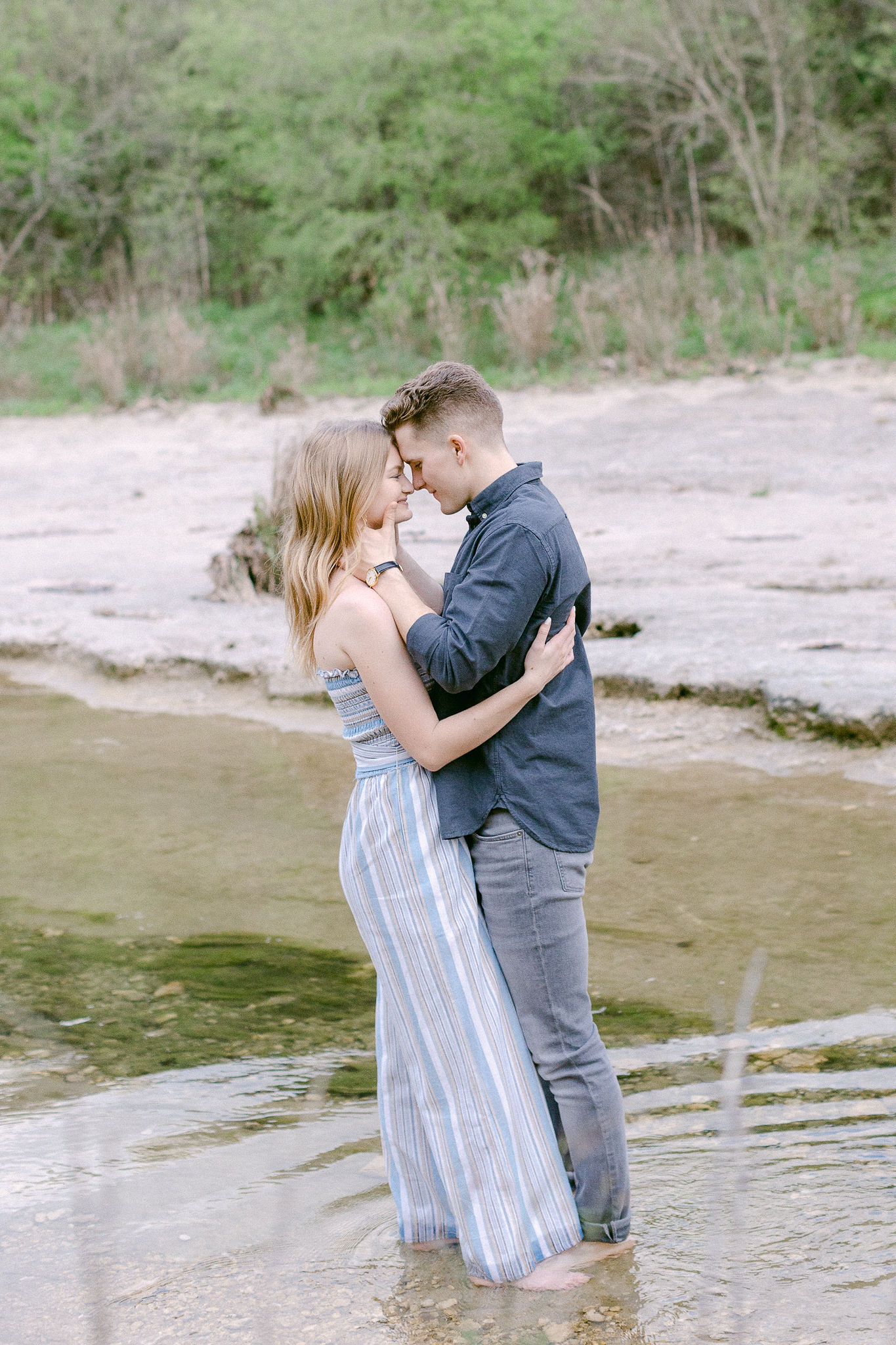 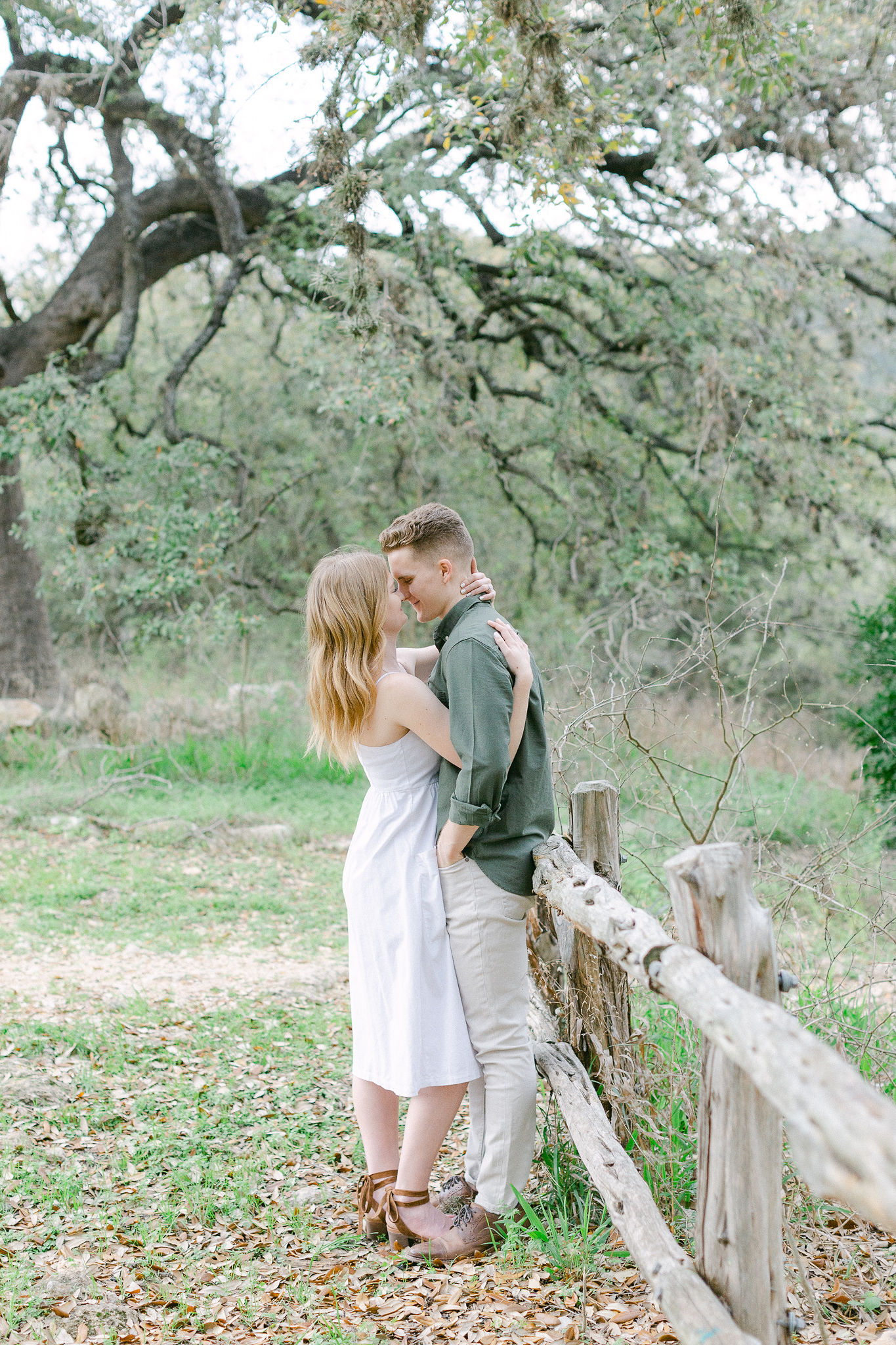 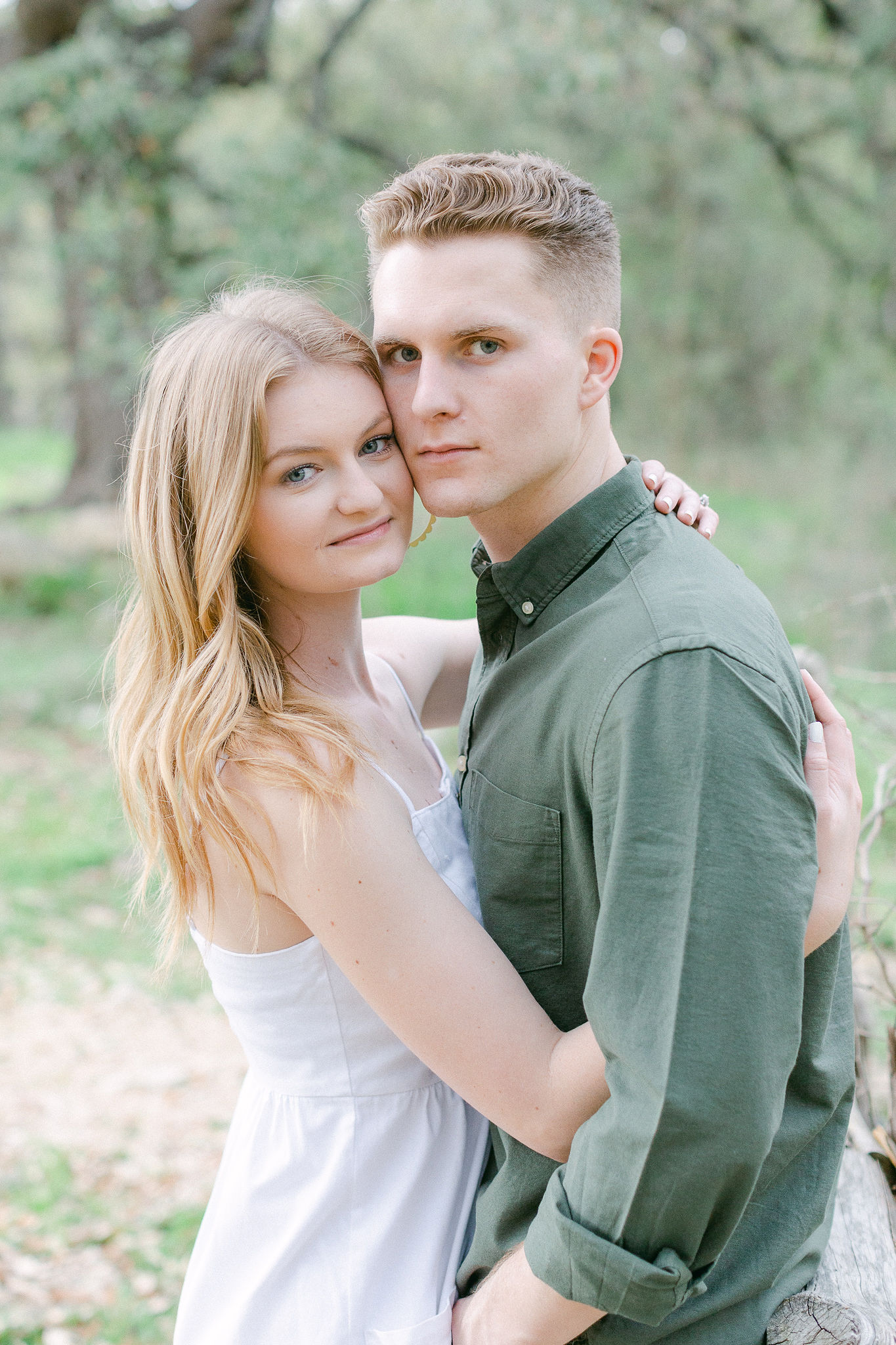 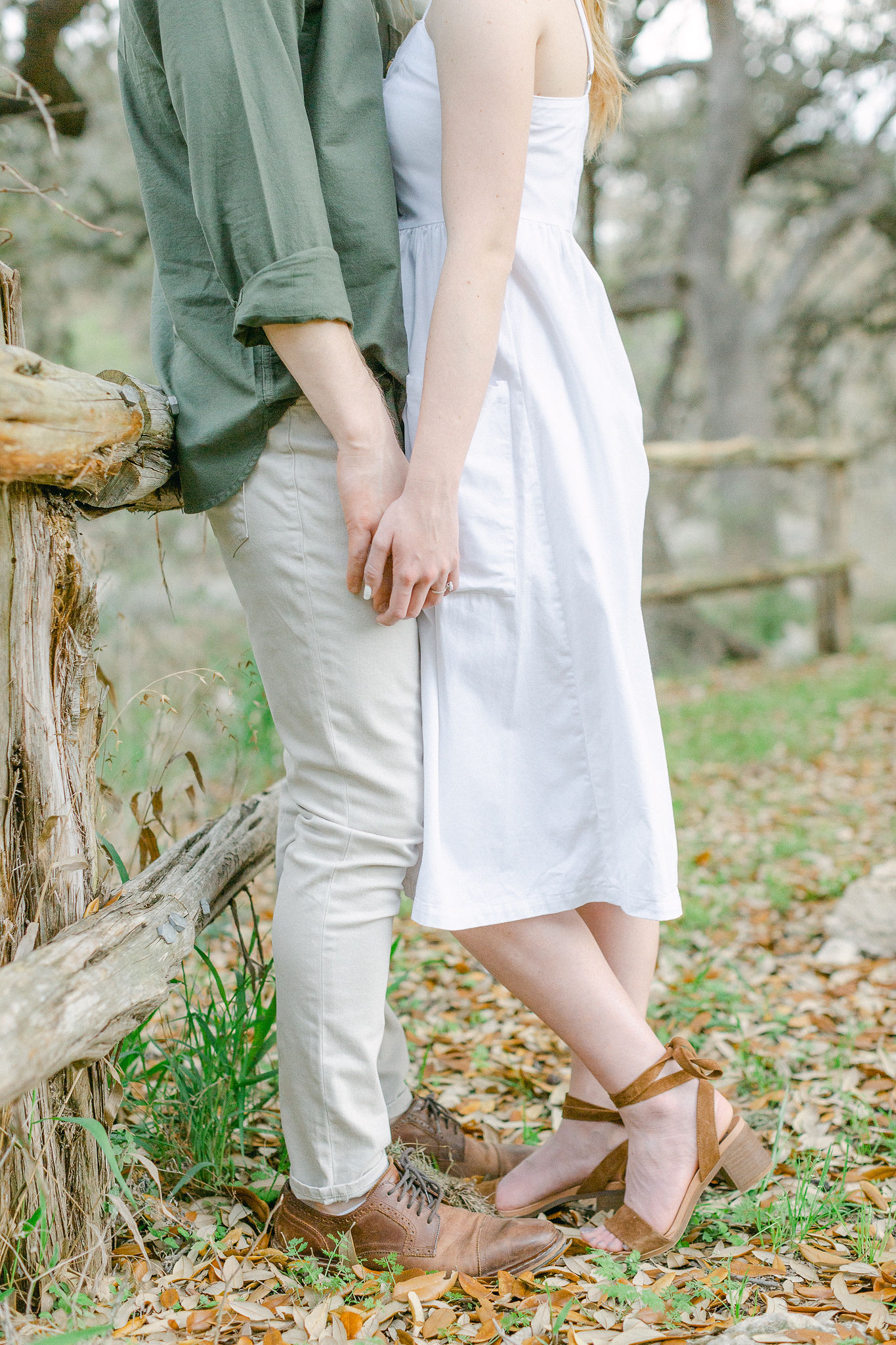 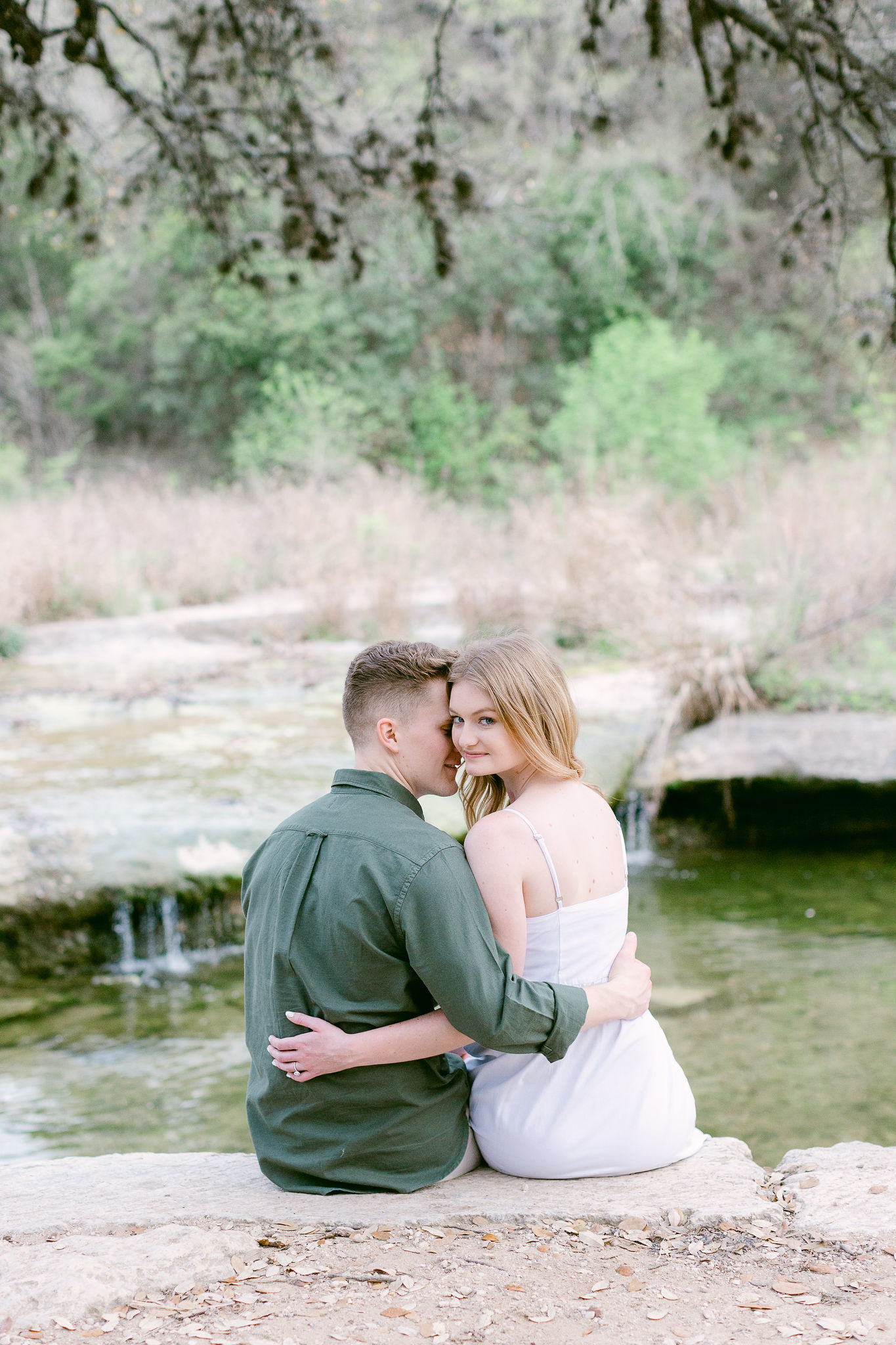 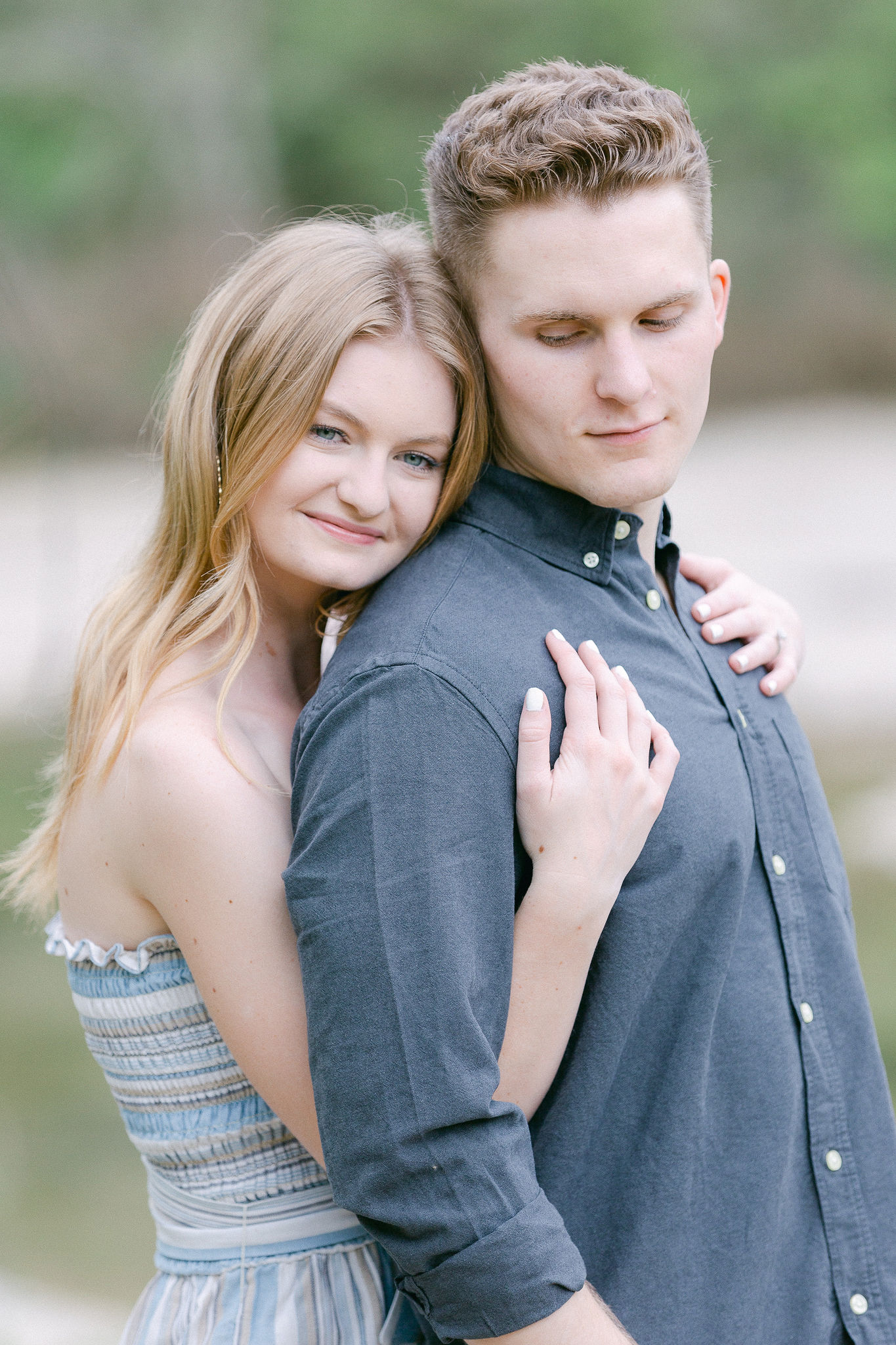 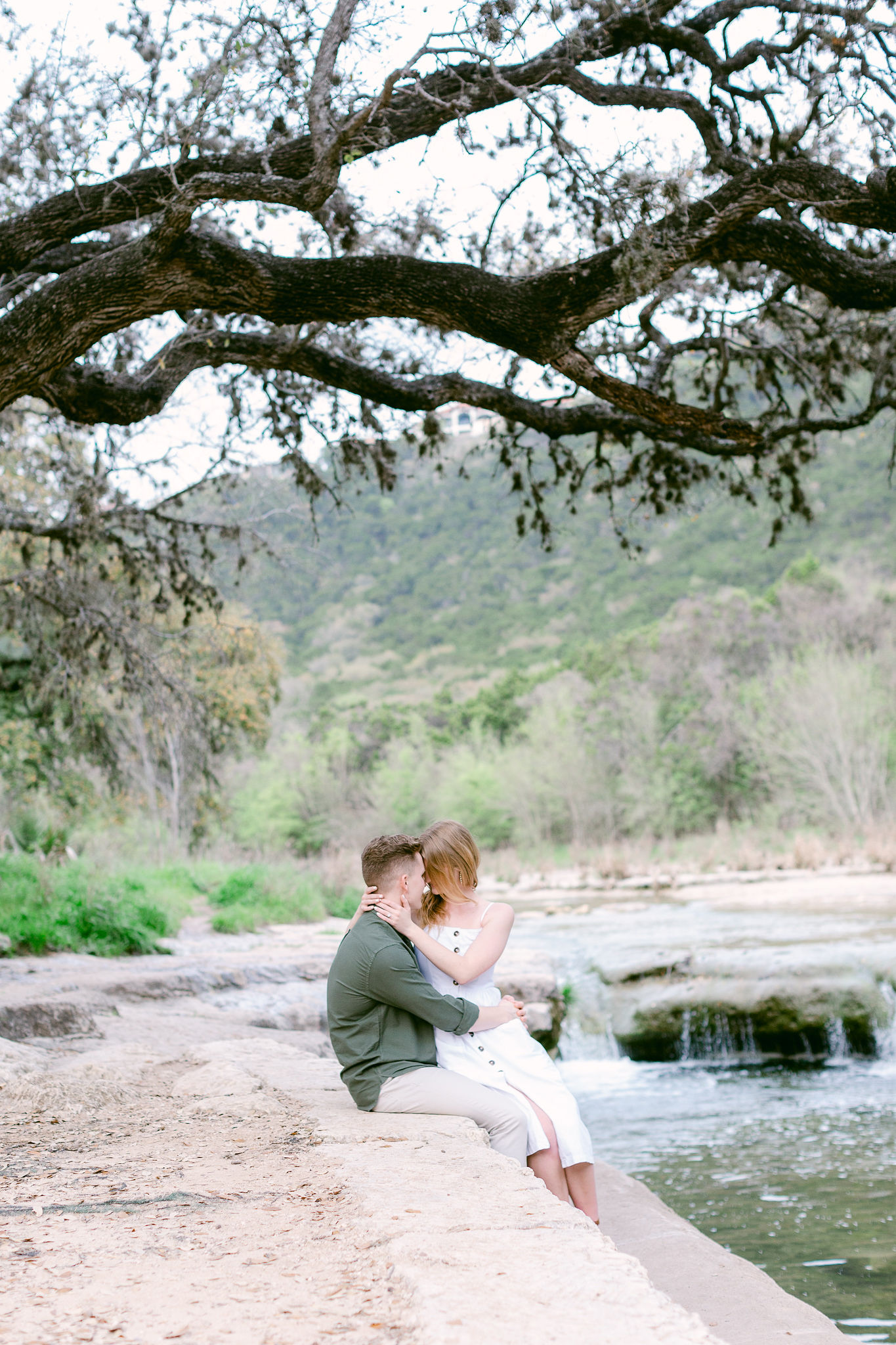 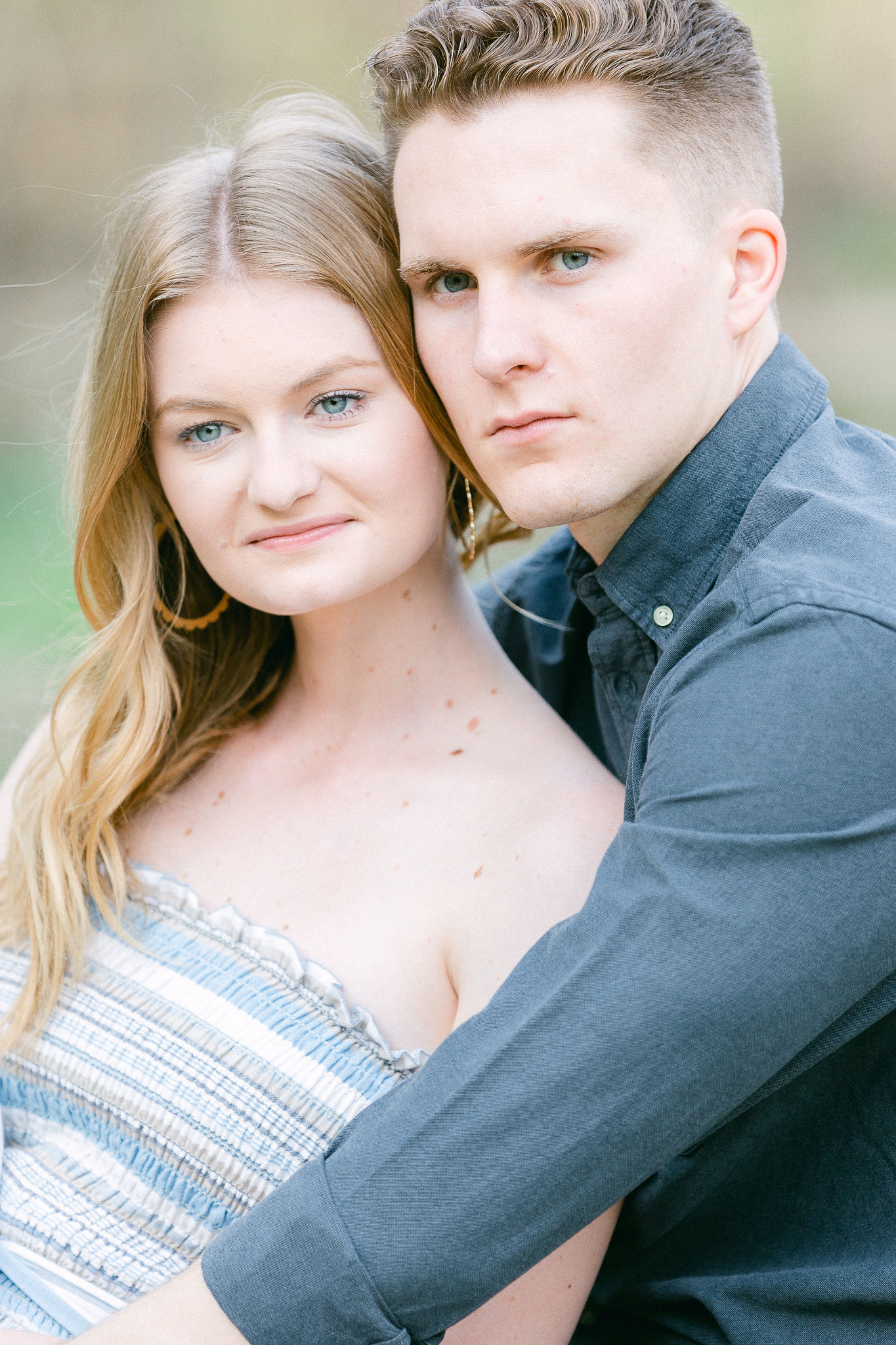 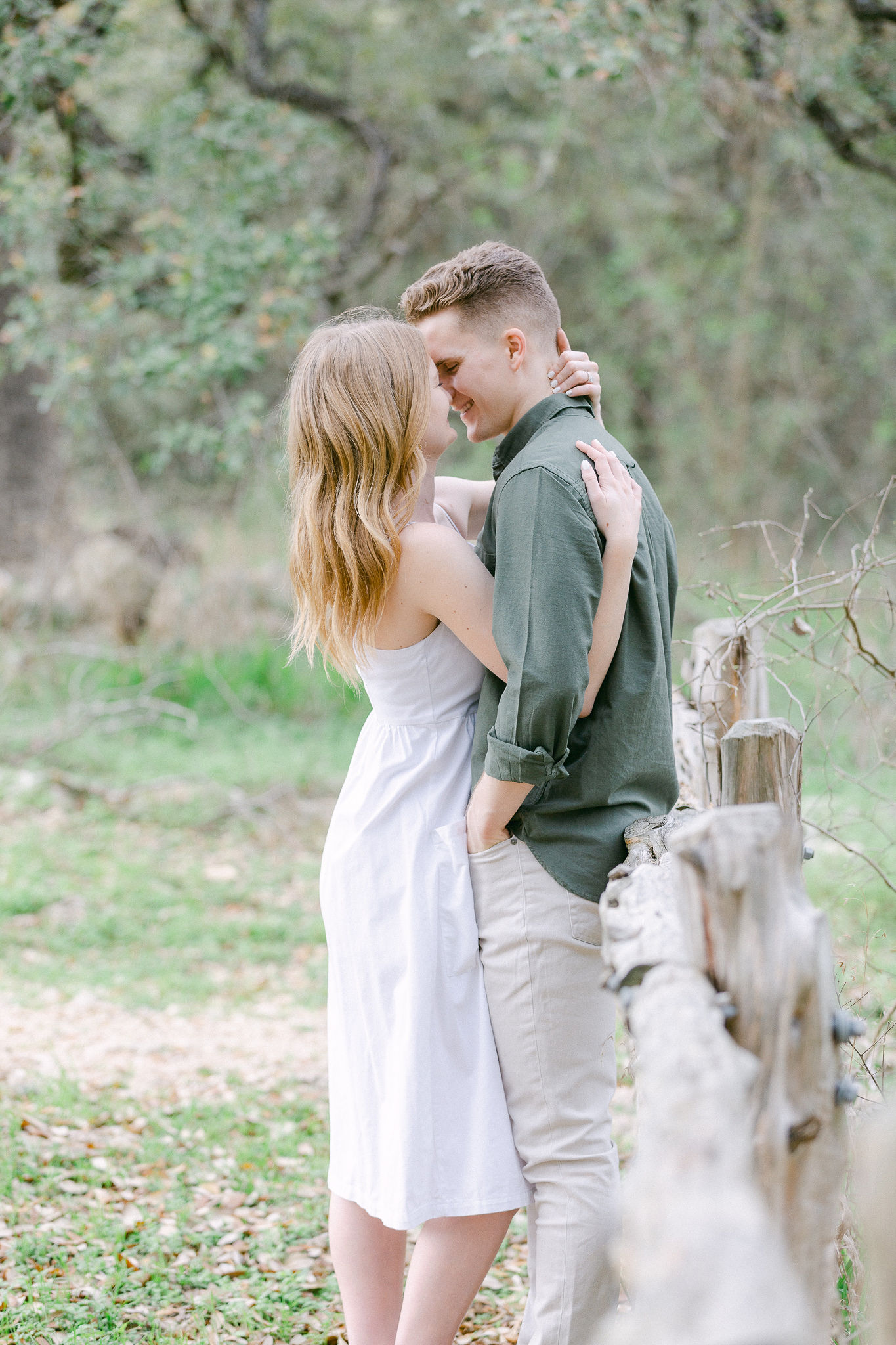 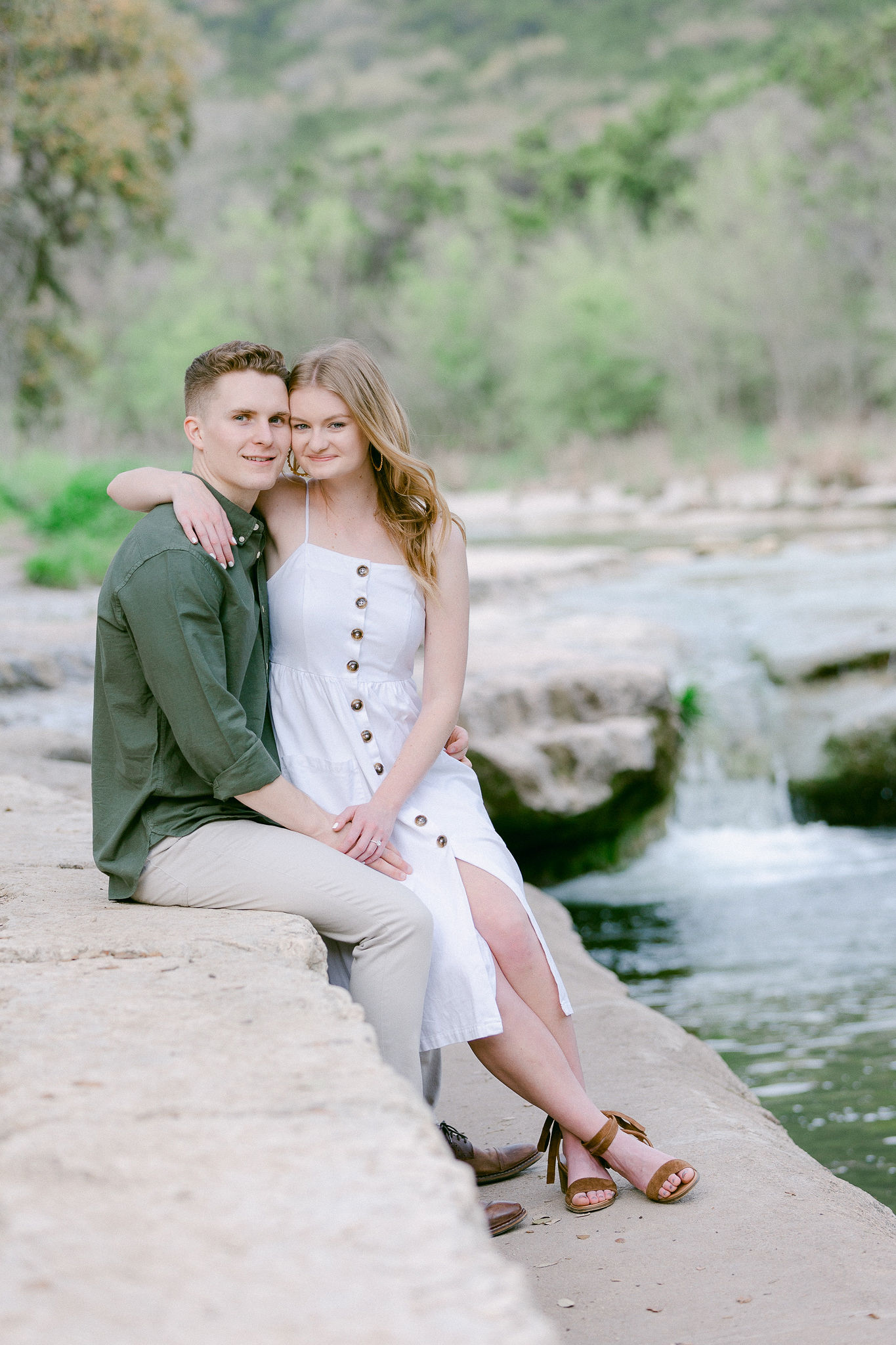 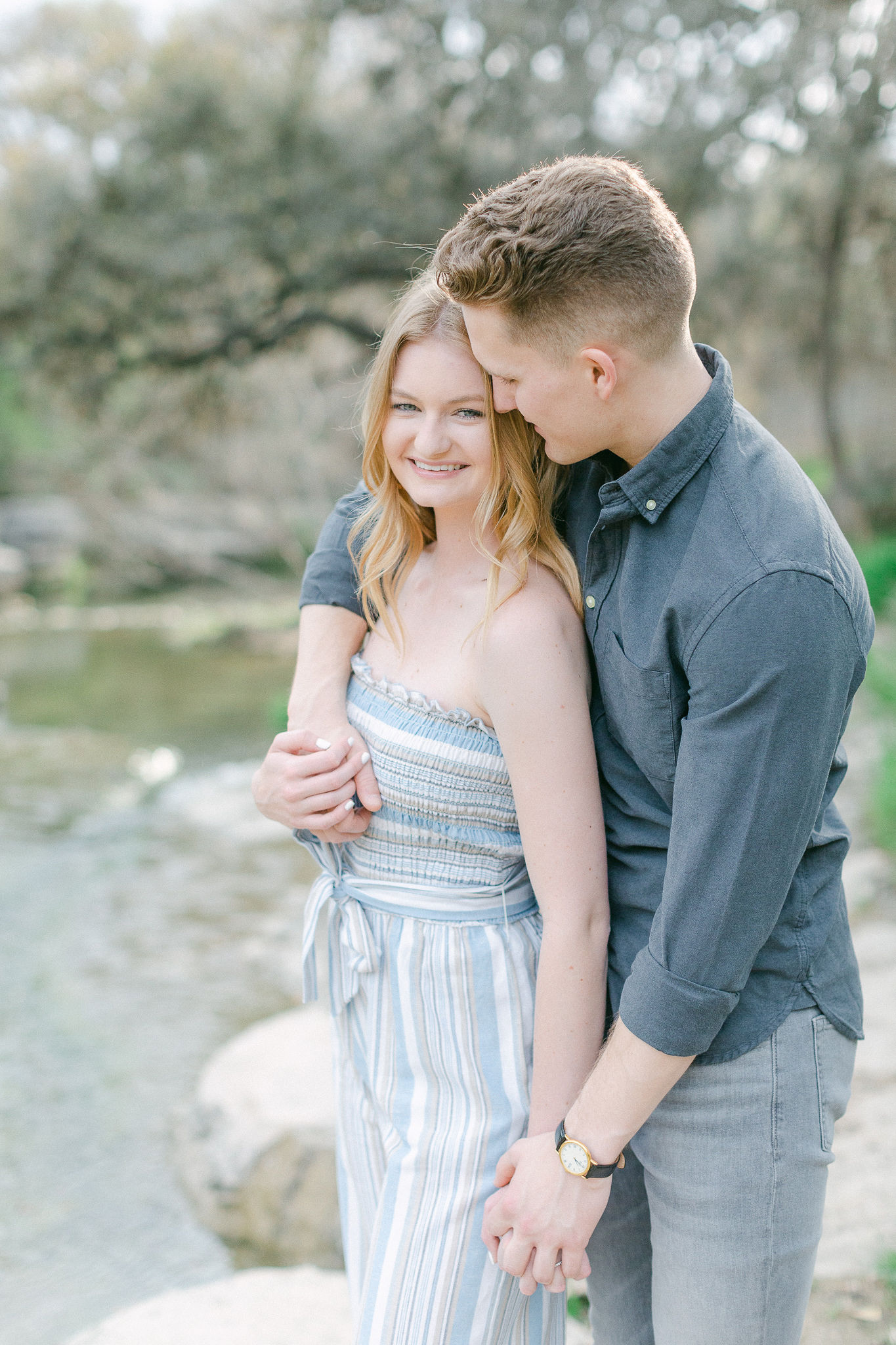 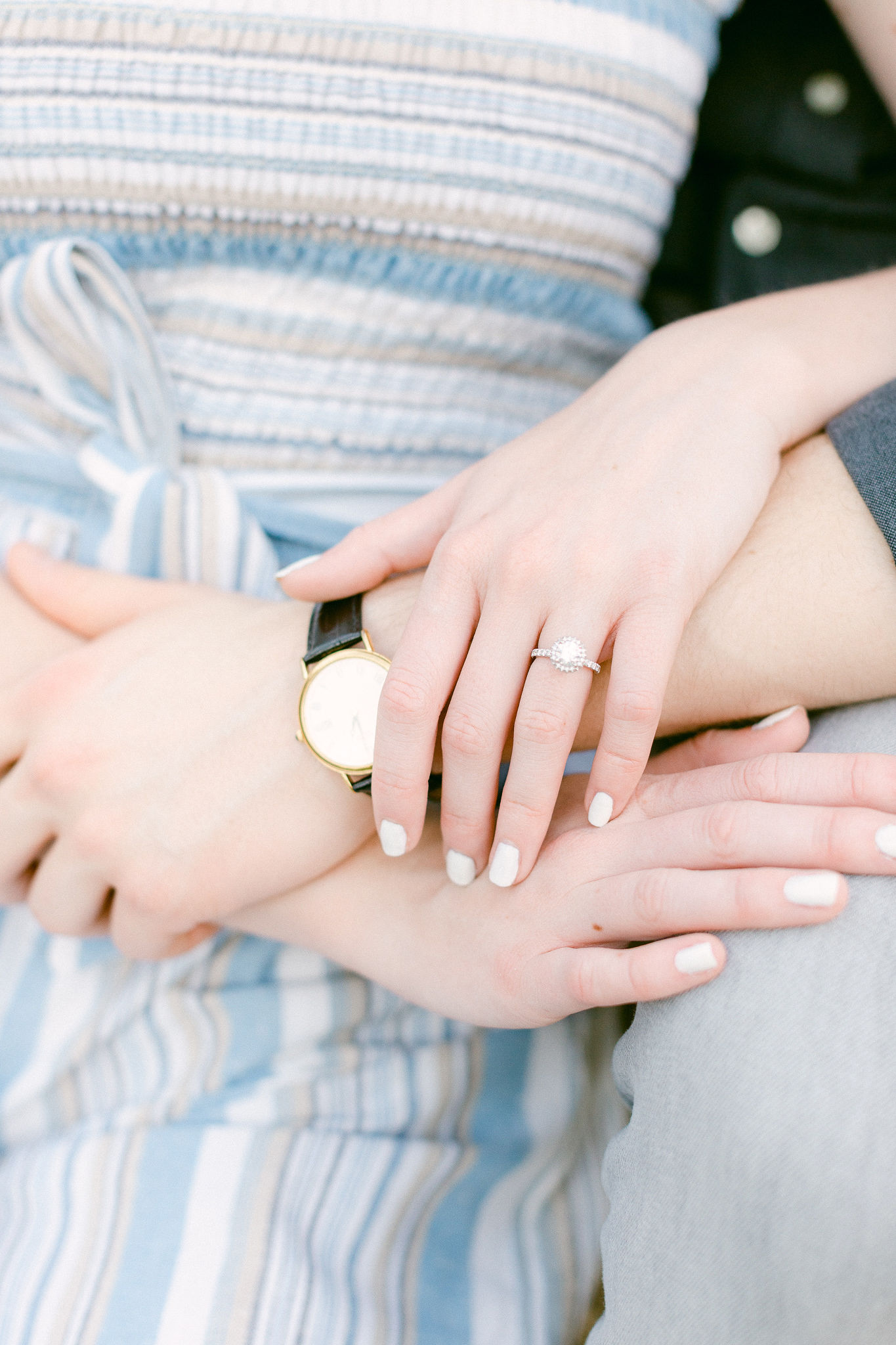 Noah and I met freshman year of college at Abilene Christian University during our “Welcome Week”. We were officially introduced when I was at the gym with my roommate and we saw some of our friends playing basketball downstairs with a group of guys, including Noah. Noah called up to us and asked if we wanted to come play with them. How could I say no???

Noah decided to lead me on a little scavenger hunt the morning that he proposed. It was homecoming weekend, so both of our families were in town. We were all going to go to church together Sunday morning, and Noah usually picks me up to go, but he called me that morning saying he would meet me there because he was going to save seats and get coffee with his parents. I got dressed and rode with my roommates to church, and as we pulled into the parking lot and I got out of the car, I saw my best friend Keely (from Austin) and her fiance get out of their car and start walking towards me. I was SO confused, but my stomach immediately dropped because I knew exactly what that meant. Standing in the parking lot, my roommates, Noah’s roommates, and Keely circled around me and read a note from Noah. The note explained why he chose Beltway (our church) as the first place that he wanted me to go because that is a place we have experienced so much growth together (and it said much more but I can’t remember!!) My friends then read a note from them to me. At the end of the note, there was a new clue telling me where to go next. My best friend, Lauren, told me she would be driving me to each spot, and I would just have to tell her where to go.

The next clue led to a place on ACU campus where Noah’s family (dad, mom, sister, brother, sis-in-law) were waiting. They did the same thing (read a letter from Noah, from them, and prayed over me). Then, they gave me another clue to lead me to the next spot, which would be at a park near the lake where Noah and I love to go have picnics. At that park, my mom, dad, and brother met me and read another letter from Noah and one from them. They gave me the third and final clue which led me to a boat dock where I found Noah. I walked down to where he was standing with different pictures and bible verses set up on the dock, and he read me his final letter. That is when he got down on one knee and proposed!! At that point, all our family and our friends joined us on the dock and we cried and celebrated together. I am pretty sure I cried nonstop for that entire hour (or more) because of how excited, nervous, and happy I was! It was better than any proposal I could have dreamed of having, and it was so perfect because he was the one that did it. A day I will never get tired of reminiscing!

This is a round, halo, white-gold engagement ring. There are diamonds circling the band as well as the center stone. The center stone is 1 carat.

We decided to have three different outfits for our session, mainly because we couldn’t narrow it down! The first outfit I wore was a long sleeve, navy, above-the-knee dress with a pair of light brown platform sandals. Noah wore a white, long sleeve button down with a navy blazer, white washed jeans, and boots. For our second outfit, I wore a blue and cream striped jumpsuit with a pair of short, nude block heals. Noah wore grey jeans, a dark grey/navy button down, and black dress shoes. My third outfit was a white, spaghetti strapped, midi dress with brown buttons down the middle. I wore short, brown block heels that tied around the ankles. Noah wore an army green button down with khaki pants and brown shoes. I wore a pair of gold hoop earrings with each outfit.