Karleen and Eric’s indie engagement session was one for the books! This city couple went for a different kind of scenery and rocked the whimsical mood as they explored the Angeles National Forest. Also, we can’t get enough of Karleen’s two-piece lace set! You rock that girl! To top it all off, Burgundy Blue Photography killed it with the green and blue hues throughout the entire session. 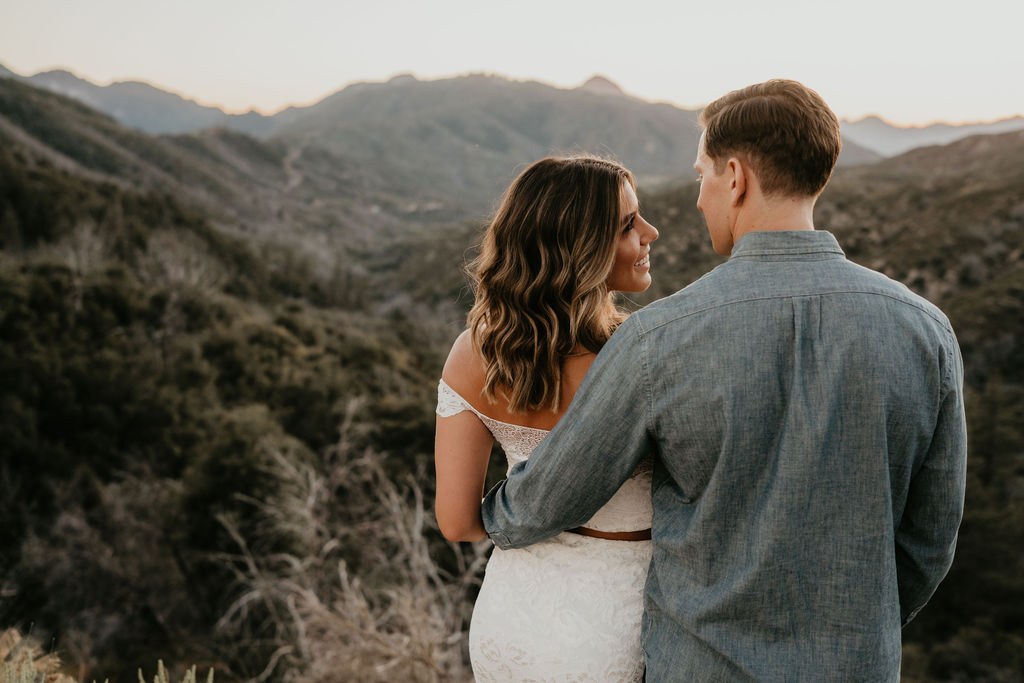 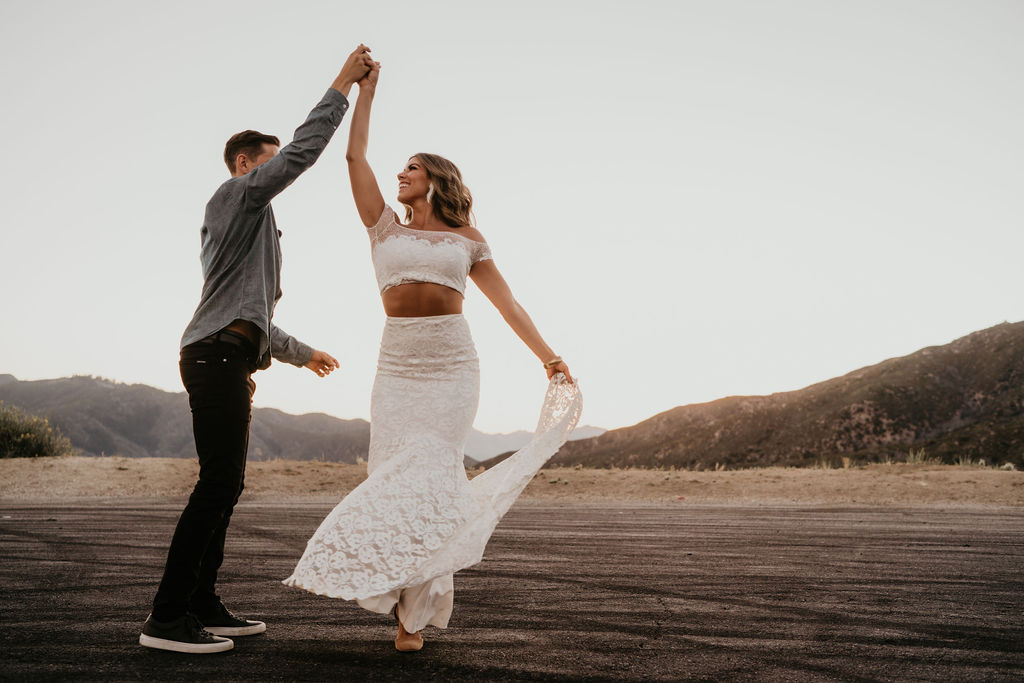 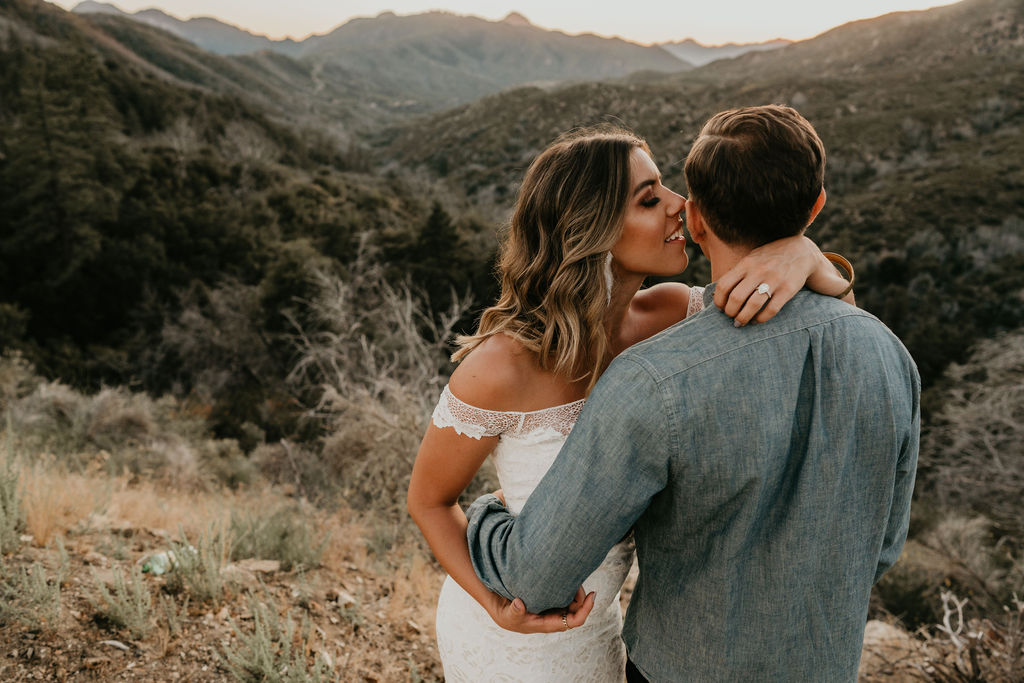 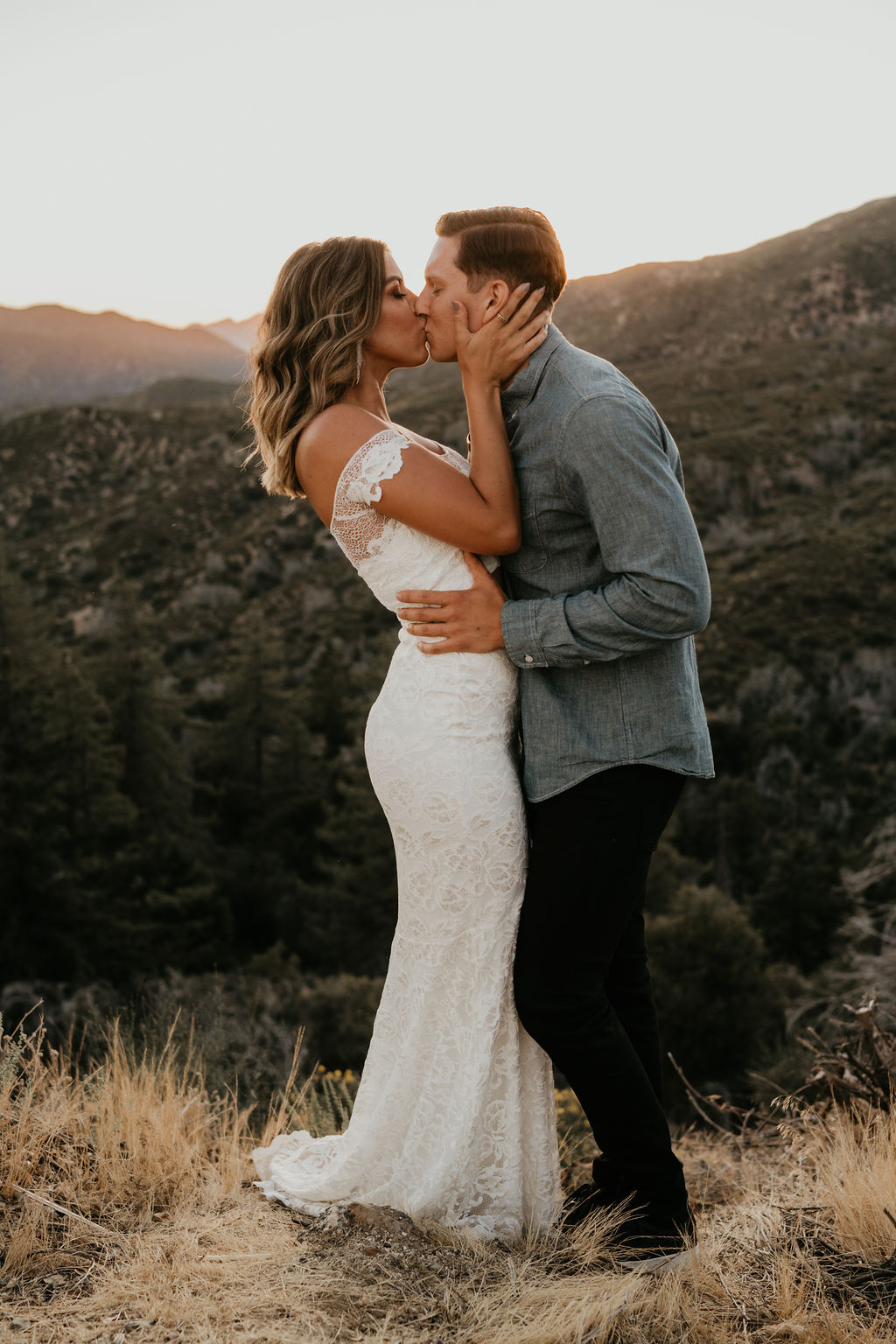 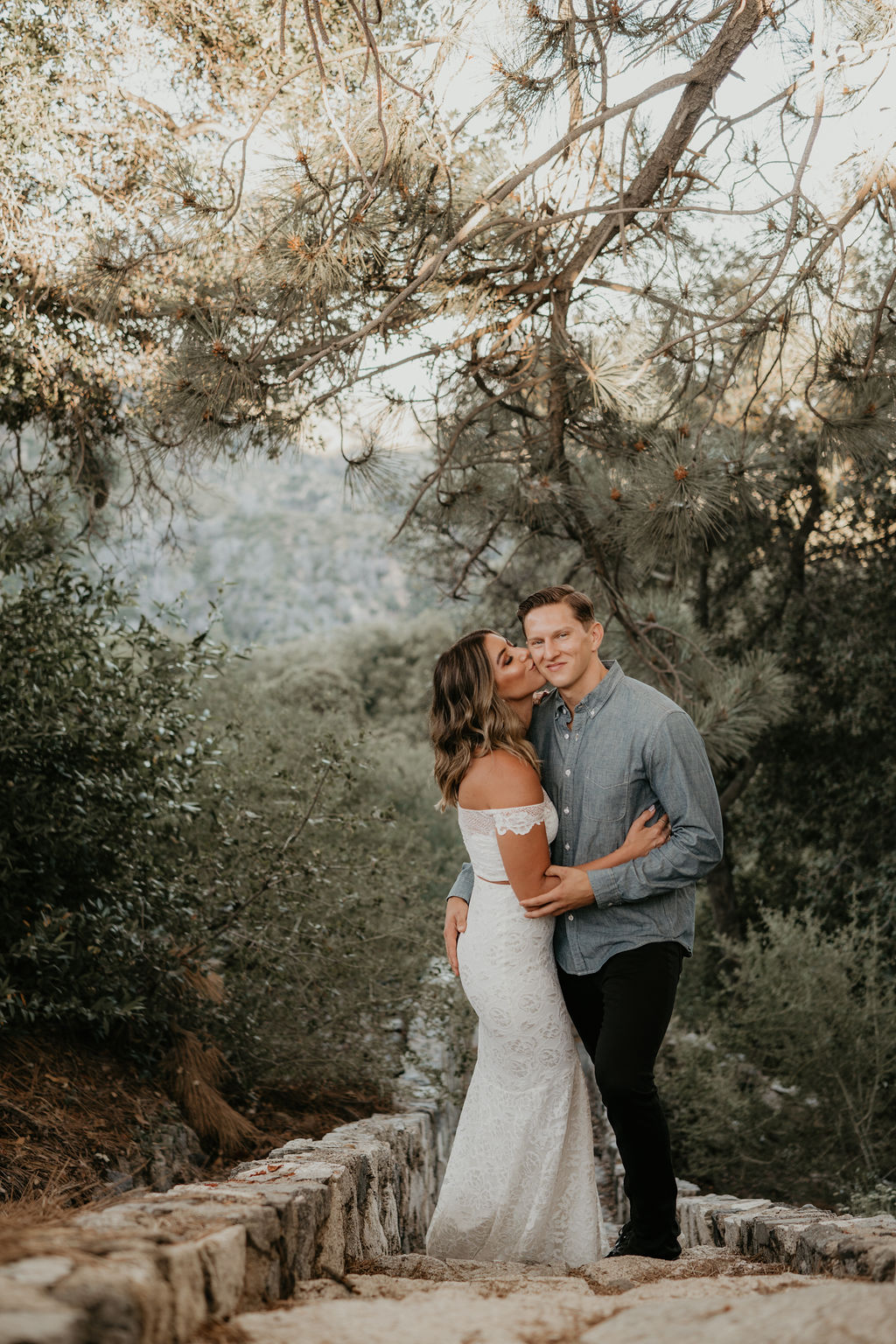 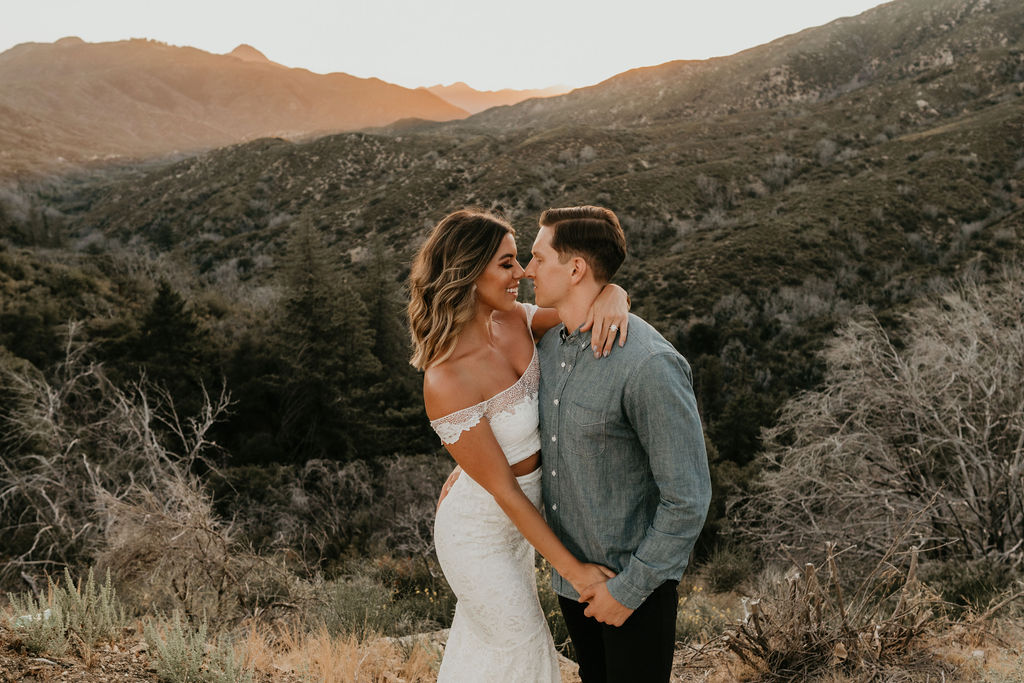 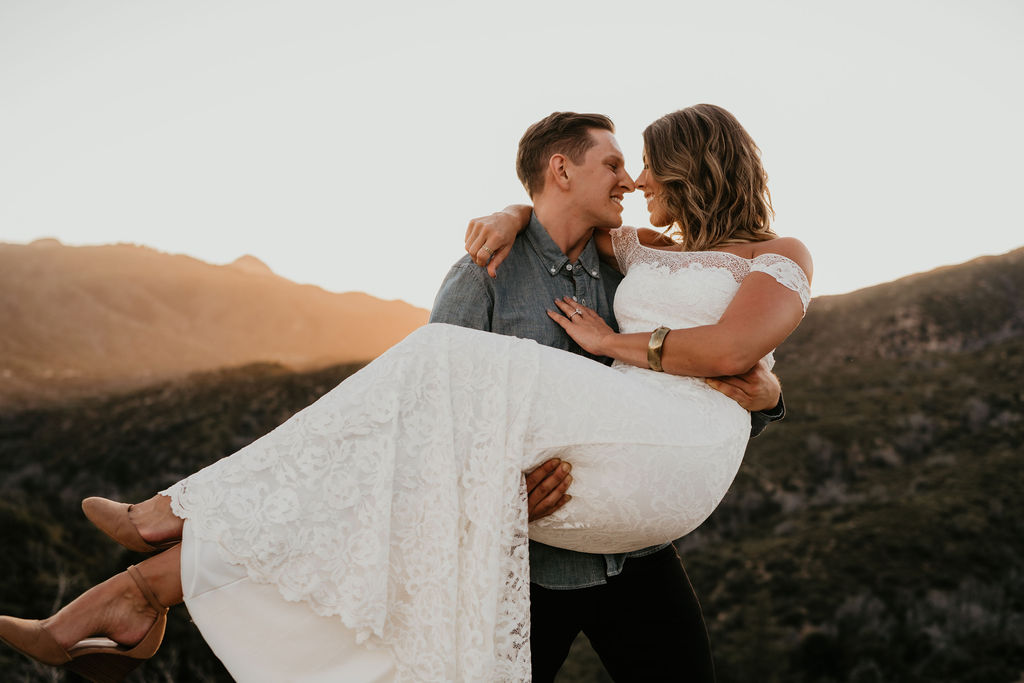 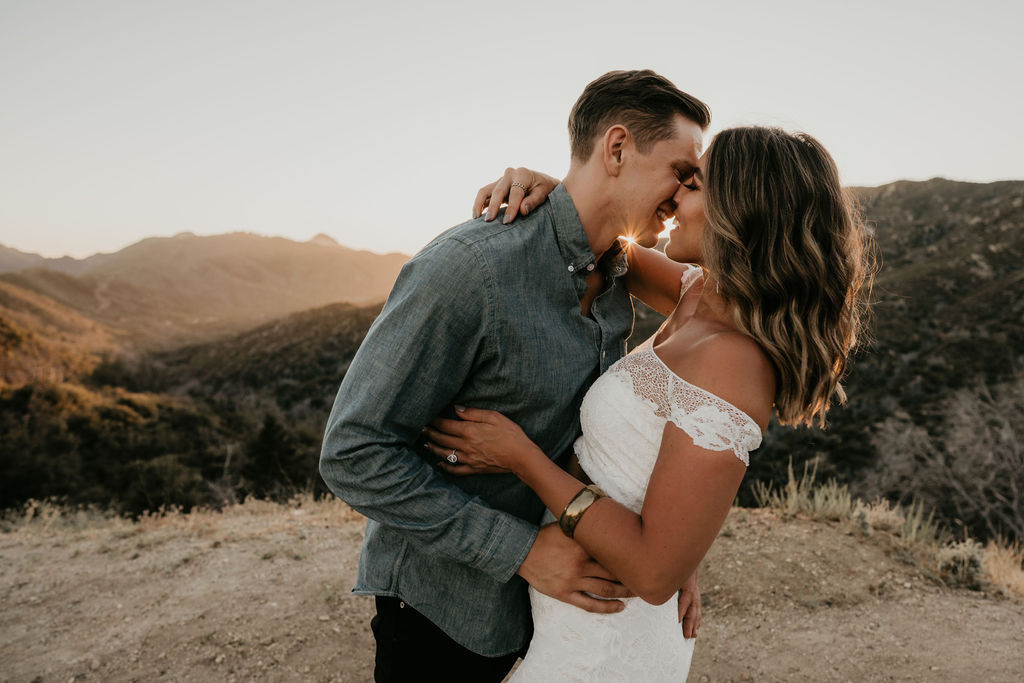 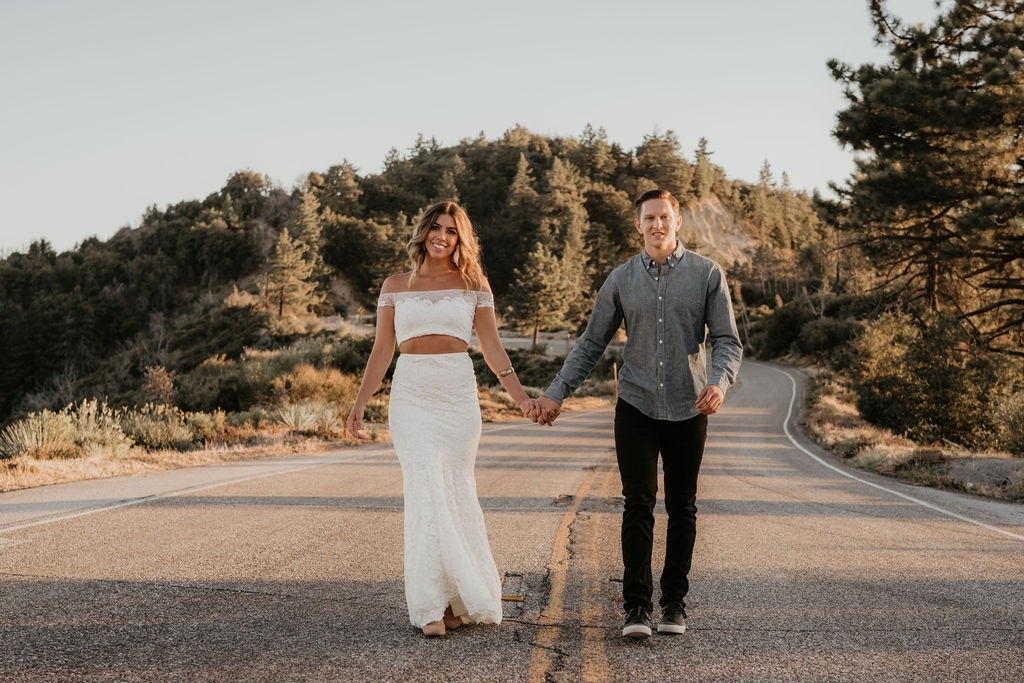 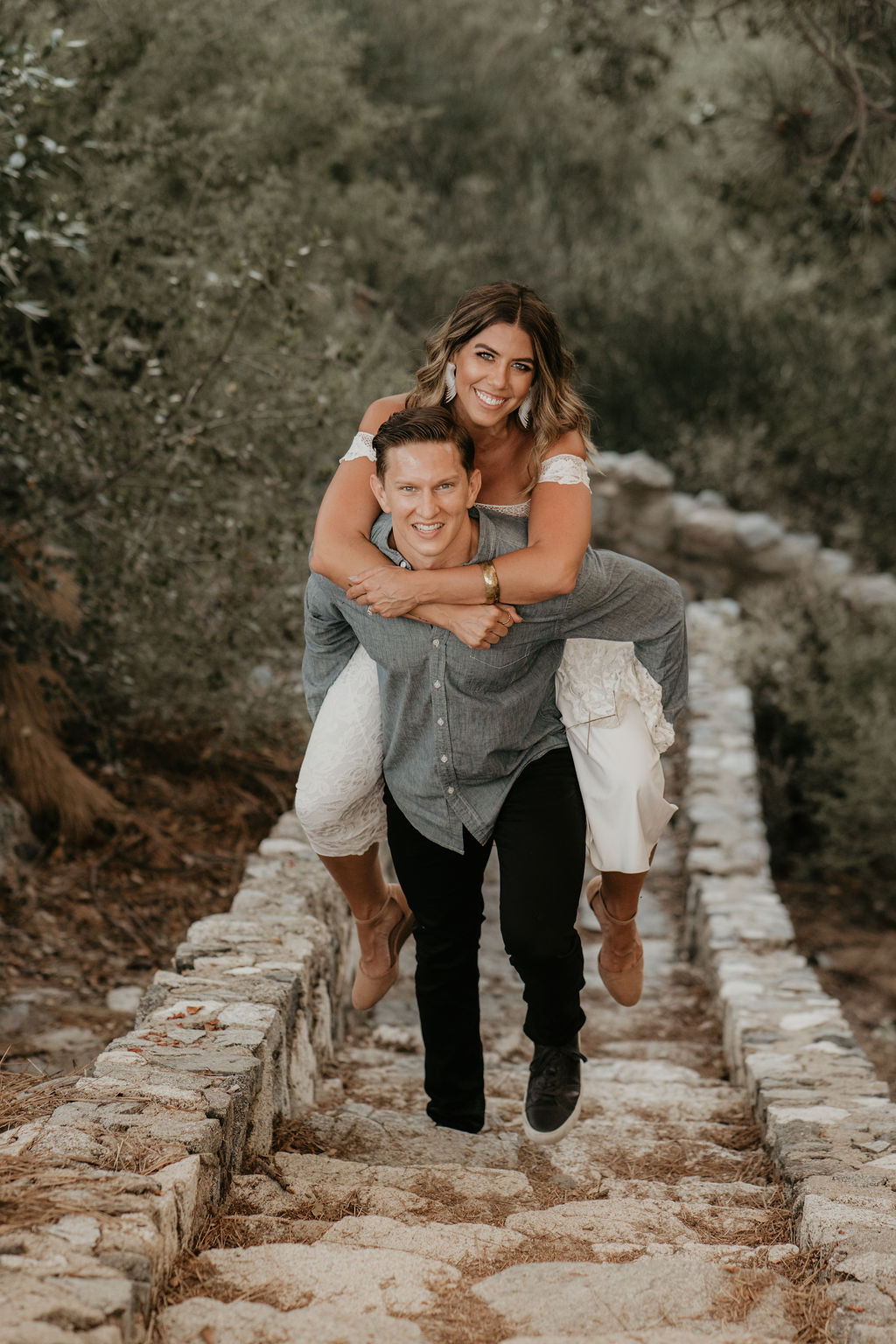 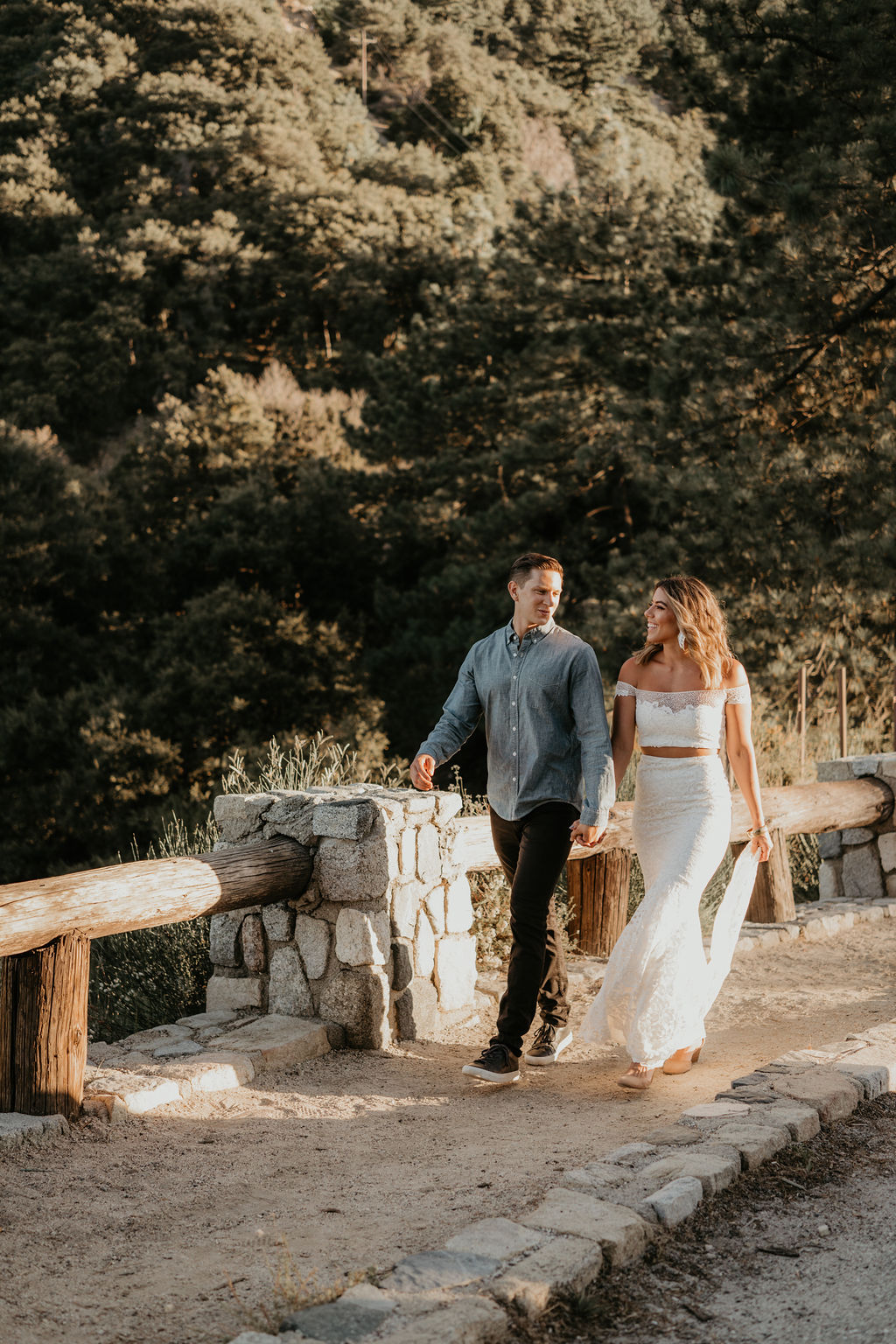 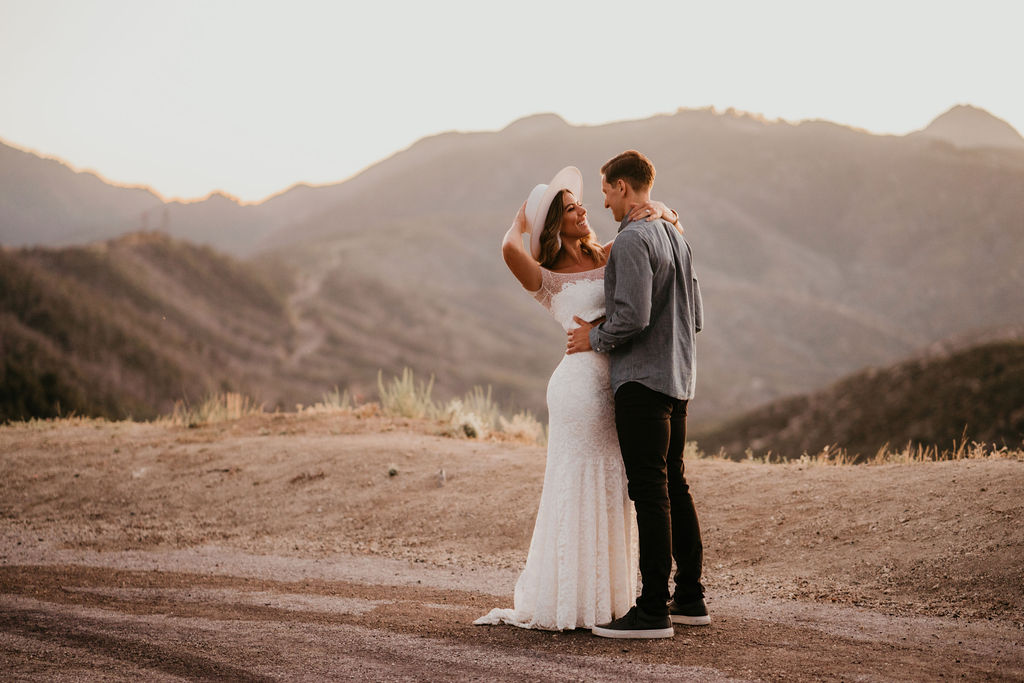 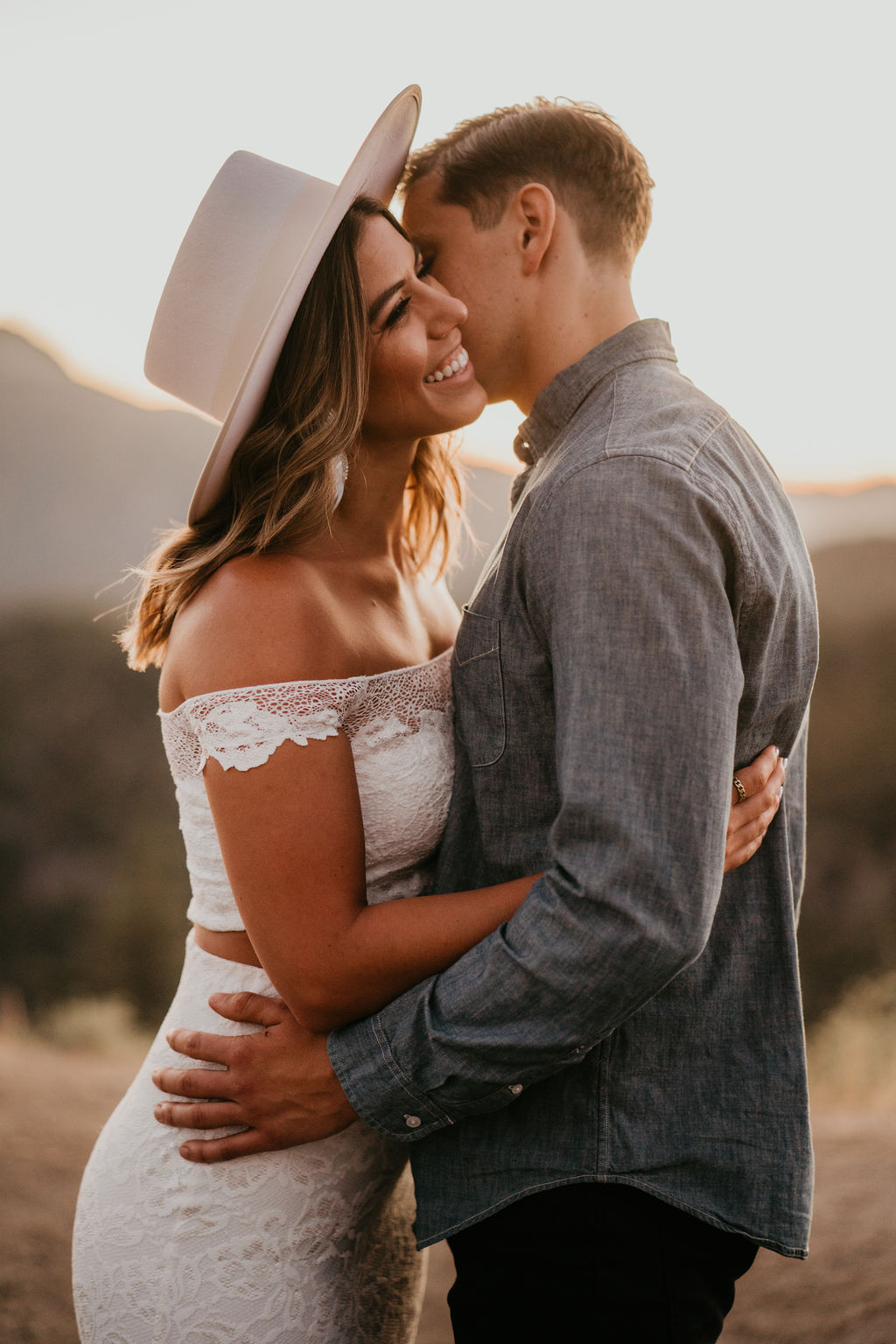 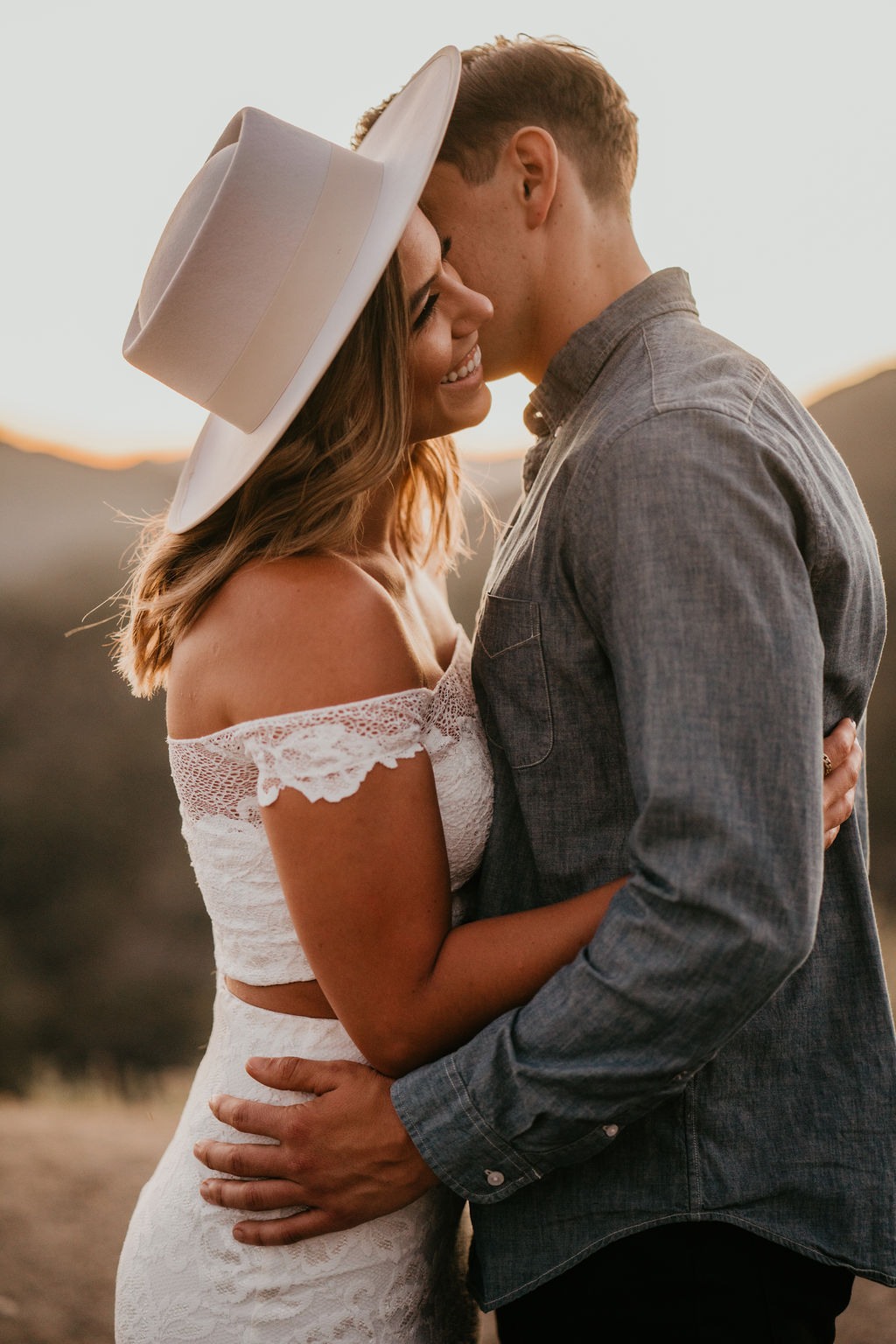 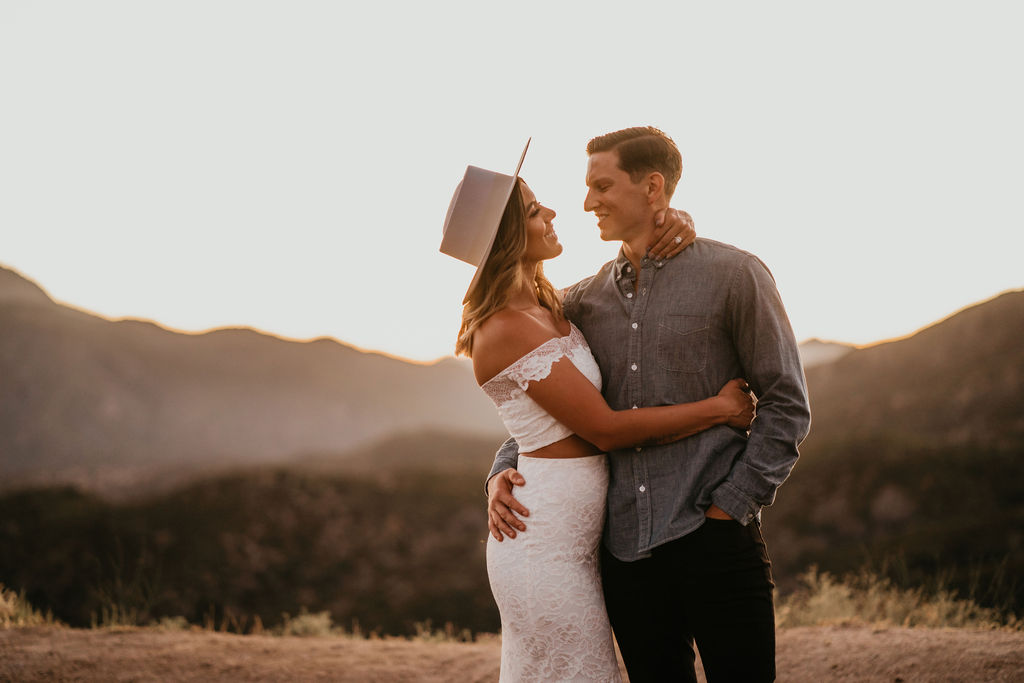 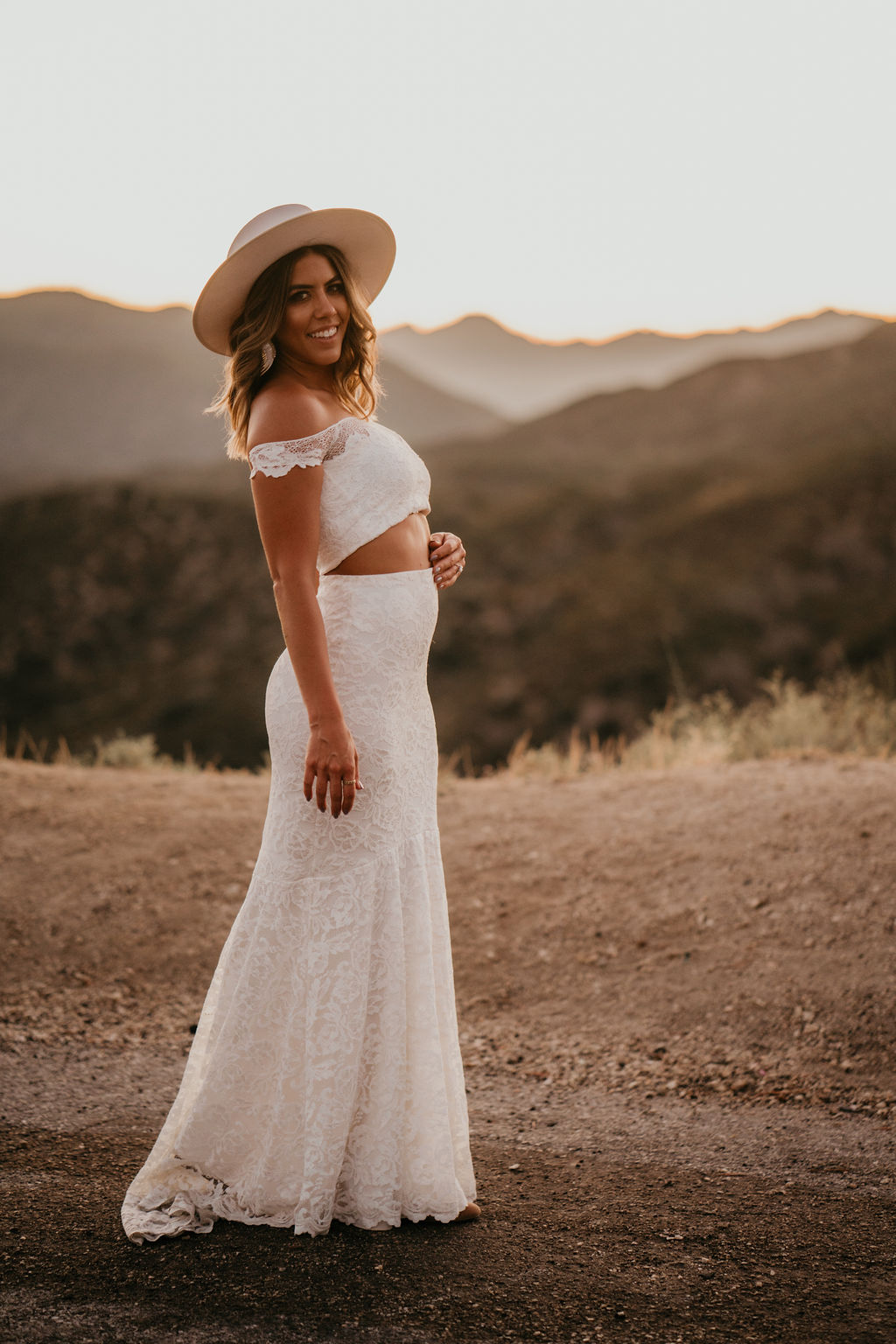 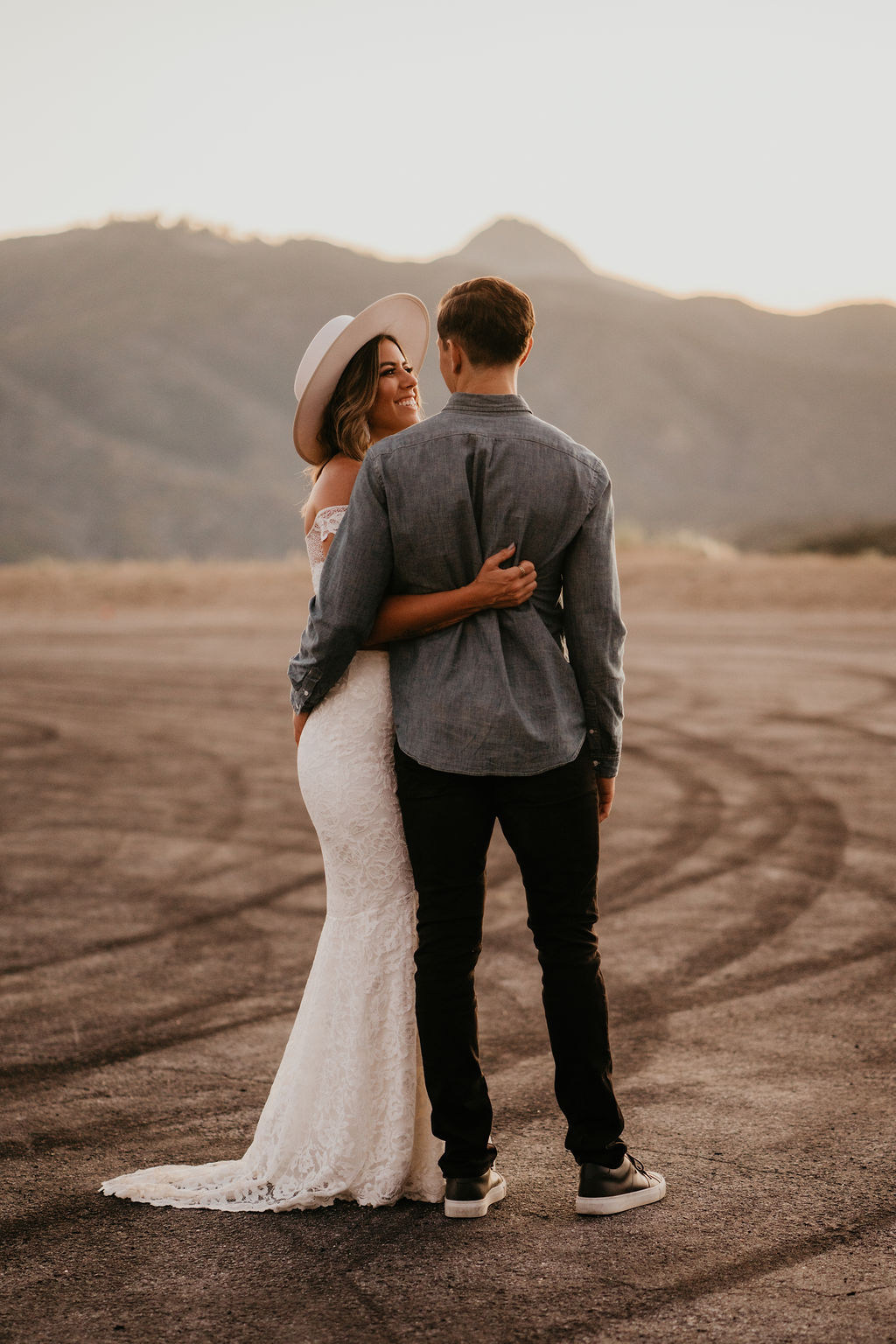 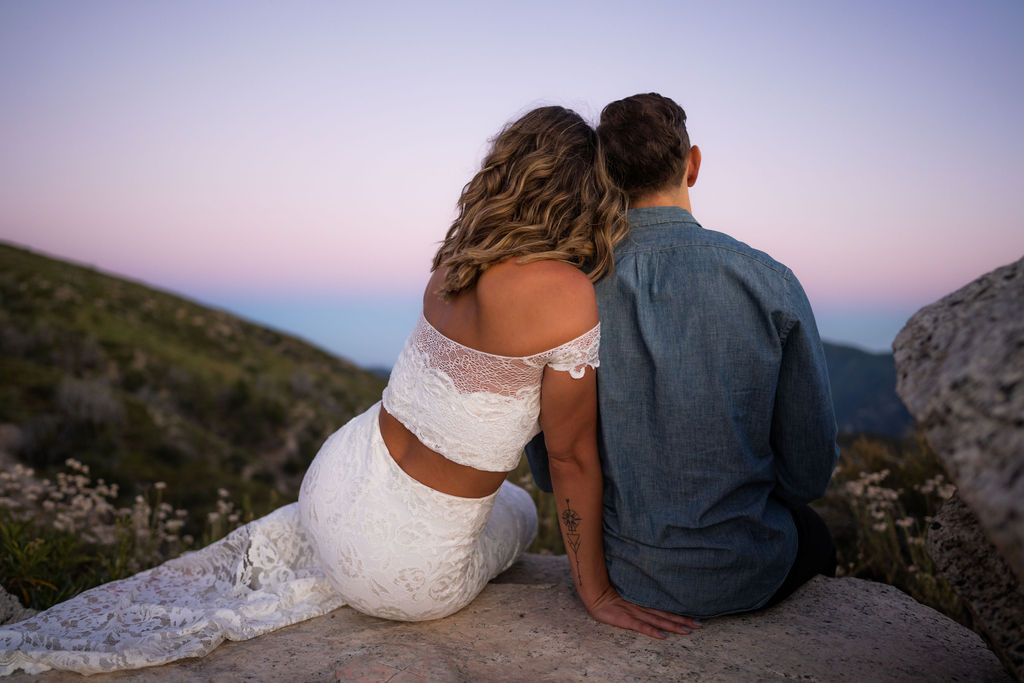 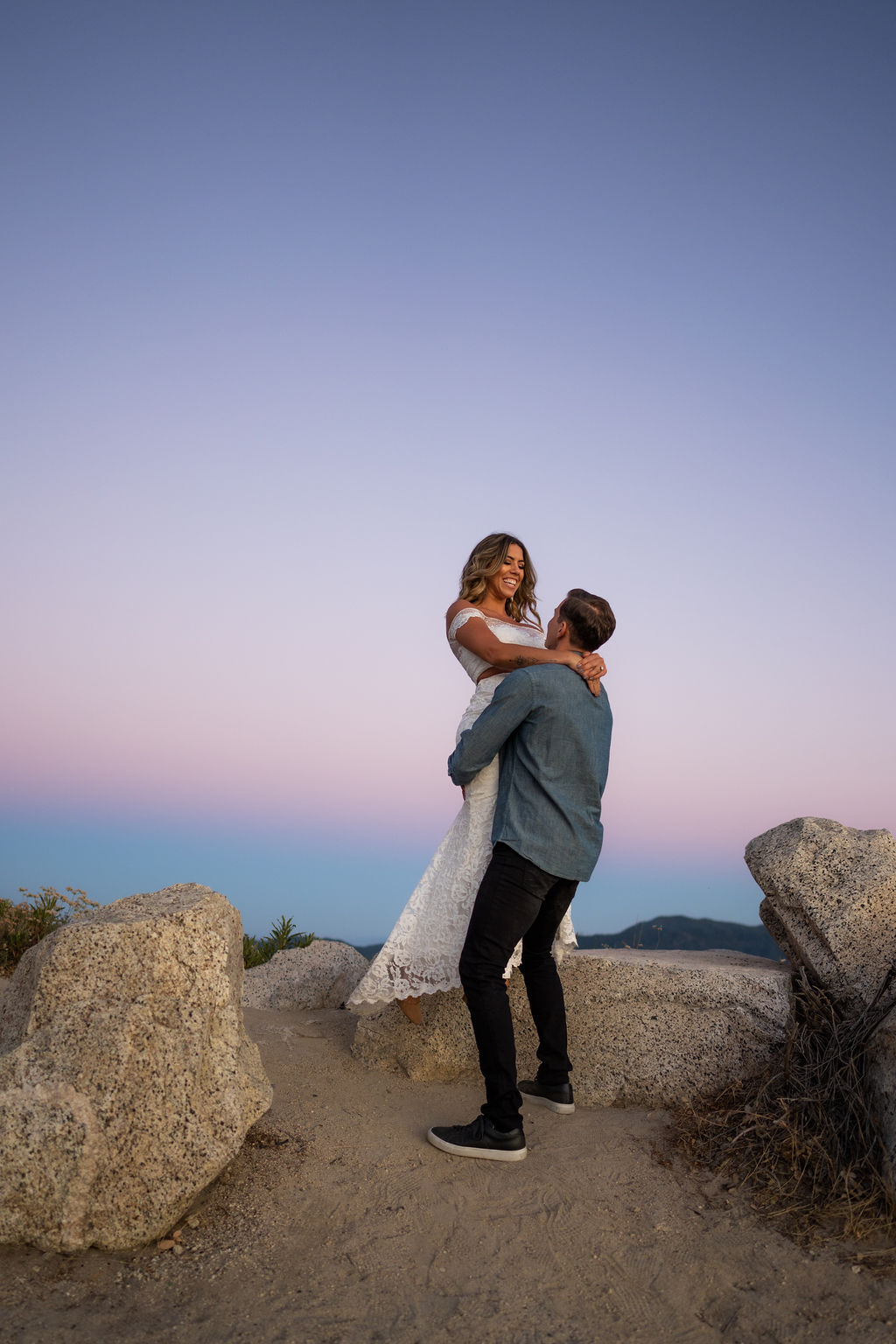 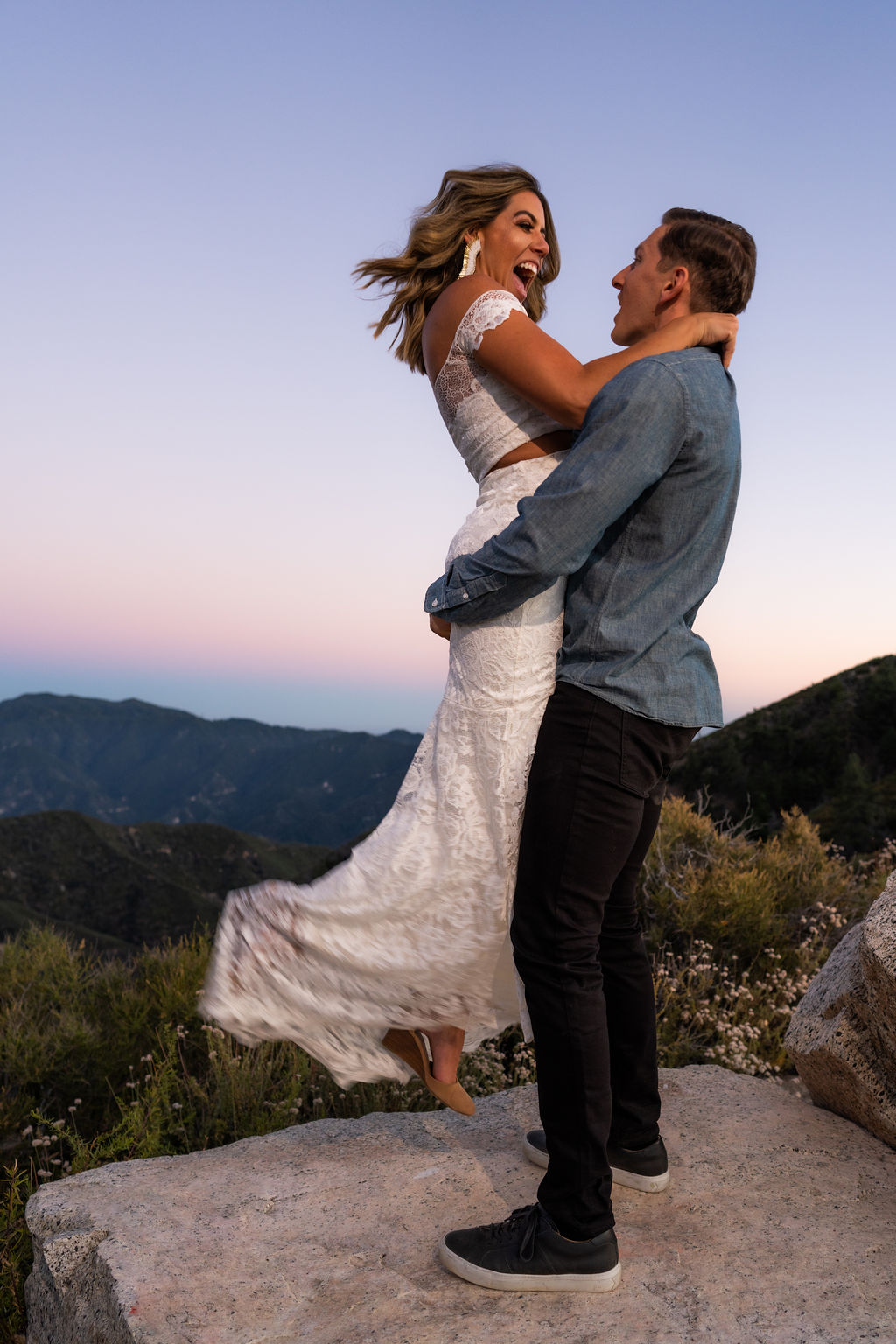 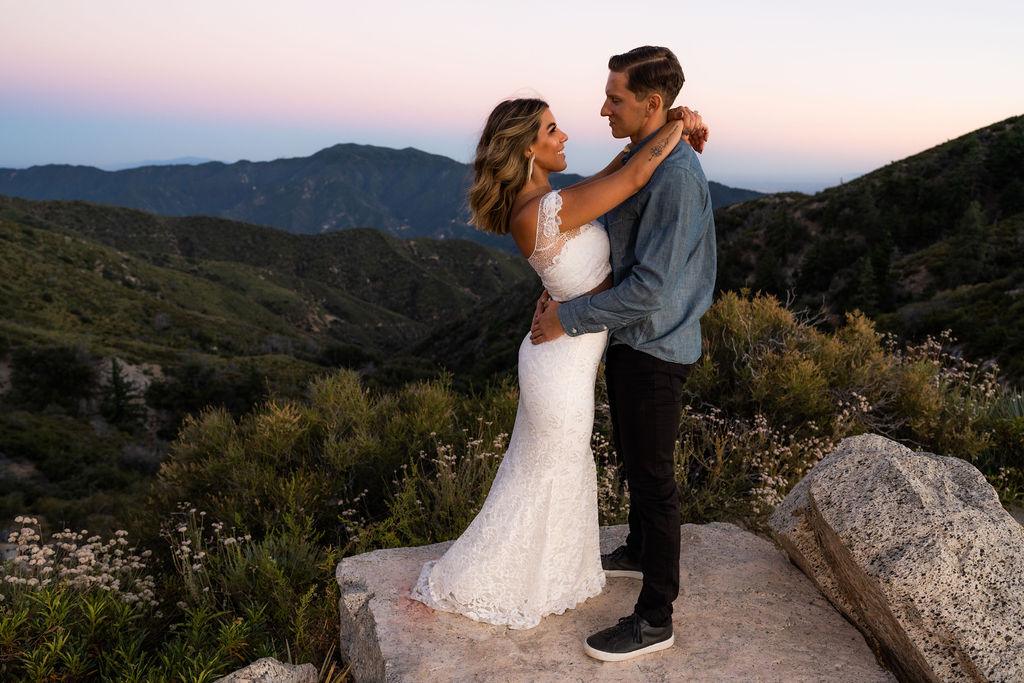 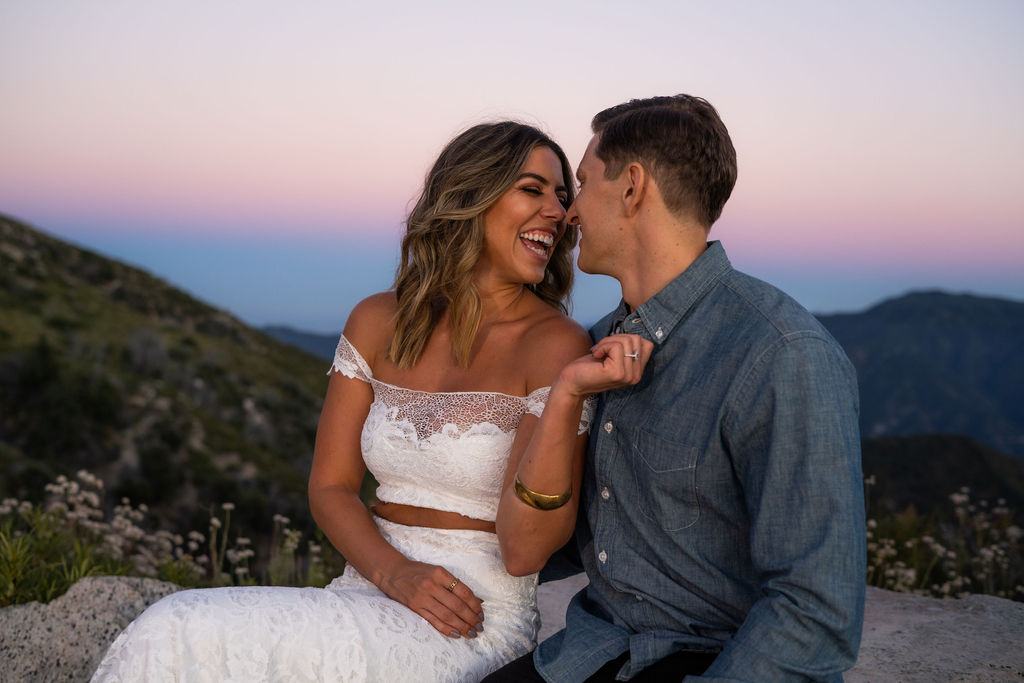 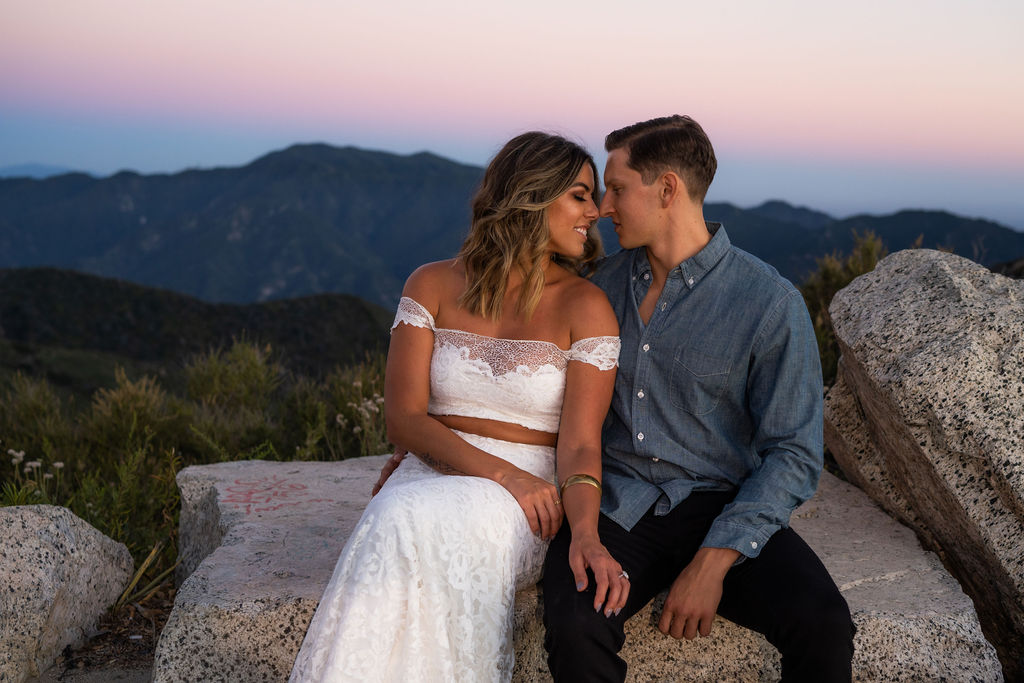 We officially met in 2015. I was bartending at the time, and one of my best friends, who was a server at the same restaurant, and her then boyfriend (now engaged as well), who was one of Eric’s best friends, set us up. After meeting for the first time at drag queen bingo one night, Eric came to my bar for a drink. He mentioned that I looked familiar. We then realized that a year prior my college roommate, who was Eric’s coworker at the time, had also tried to set us up; however, Eric had switched companies and we never ended up meeting. Long story short, two separate mutual friends, who have no connection to each other, tried to set us up a year apart.

It was a fairly normal Saturday morning. Eric told me that he was coaching CrossFit that morning, so he would be at the gym well into the afternoon. I slept in, but was not feeling too well. I had planned to have a girls day with my best friend. However, I thought it was a bit odd that my friend, Rachel, wanted to get all dressed up and go shopping in Santa Monica, as our usual girls day activities include a spin or yoga class and a casual bite to eat after. I was actually so sick I thought about cancelling. But I had my suspicions… and these suspicions led me to muster up the energy to get dressed up and go out with Rachel. Meanwhile, Eric wasn’t actually coaching. He ended up working out and then meeting up with Rachel to finalize the proposal game plan to take place that afternoon. Eric had arranged the proposal to take place on the rooftop of the Hotel Shangri-La, and there was a 30-minute window for which the rooftop was going to be empty(prior to the Onyx bar actually opening).

This rooftop was special. Our first wedding together, in which he had to be my boyfriend to attend, the rehearsal dinner was held there. It was the next day at that wedding, that Eric told me he loved me for the first time. “I knew that was where I needed to propose to her”. Rachel and I had finished up lunch and were walking around 3rd Street Promenade window shopping. I decided that I needed coffee in order to survive the rest of the day. Not too long after we got some coffee, Rachel proposed that we go up to the rooftop bar at the Shagri-La Hotel, the Onyx Bar, to grab a drink… it was 2:15 at this point. I thought this was odd and knew that it seemed a bit early for the bar to open, but Rachel mentioned she had a friend that could get us up there before it opened. Also, Rachel wasn’t one for drinks…

Rachel and I got to the hotel, coffee still in hand, and upon arrival the front desk told us that the bar wasn’t open yet. Security then came over to us and asked us our names. He then told the front desk that we are okay to come up and that they are expecting us. We hopped in the small elevator, rode it to the roof, and when the doors opened… Over the bar speakers Ed Sheeran’s song “Perfect” was playing. I walked through the bar onto the roof and saw the fire pit with a dozen red roses and a chilled bottle of champagne. Then from around the corner, came Eric. I approached Eric and he said to me: “It was almost 4 years ago we were on this rooftop for the first time. And it was that next day that I told you that I love you. Ever since that night, I have been thinking and dreaming about this moment and our life together. You are my best friend, the yin to my yang, my star and moon. I love you so much, there are too many muches to count.” He then got on one knee and asked if I would marry him. With tears of happiness starting to come out, I said “Duh!”

I (Eric) ended up going to the same jeweler that my dad had my mom’s engagement ring made from. I knew that Karlee wanted a pear shaped diamond. He had several diamonds from me to pick from. Once I picked out the diamond, the next step was the setting/band. The jeweler told me to take a lap around the jewelry mart (in downtown LA) and see if I spot anything that I liked. From some of the settings Karlee had sent to her friends (which they passed along to me) it seemed as though a halo was something she liked. I did a full lap, and found nothing. But upon returning to my jewelers small shop, I spotted a halo setting for a pear shaped diamond in the window. It was beautiful. The jeweler then slipped the diamond into the setting, and it was a perfect fit.

The jeweler mentioned that he didn’t even have to make any adjustments to the setting. He then asked about Karlee’s ring size. Karlee had told me she was roughly a size 7.5. The jeweler mentioned that the ring was a size 6.5 and would fit perfectly. I had my doubts, as the last thing I wanted was to not have the ring fit when I proposed. But, surprise surprise it was a perfect fit when I put it on when I proposed. And a funny story, when we went to dinner after the proposal, our waitress greeted us with champagne. She asked to see the ring, and upon seeing it said: “Holy shit!” … out loud haha. She immediately apologized and luckily there weren’t very many people in the restaurant just yet as we had one of the first reservation times.

I knew I wanted something bohemian for my outfit. I went to Grace Loves Lace in Venice Beach and fell in love with the comfort and fit of their dresses. Candice, my associate, called all over the country to help me find the sample sale in my size of a two-piece set. She even sold me on the idea that for our one year anniversary I can wear the top again to remember our photo shoot. Eric went with a simple blue button down, which helps bring out his blue eyes, and black jeans.

Not too long after our engagement, we started to talk wedding planning. We knew that we did not want a summer wedding, nor anytime of the year where the probability of it being hot was high. So we landed on January. As we didn’t feel like January 2020 would be enough time for us (8 months), we landed on January 31, 2021. This was also the week between NFL playoffs and the Super Bowl. With a 6/1/2019 engagement we thought we had all the time in the world. Unfortunately, no one saw COVID coming. We have since had to postpone the wedding another 9 months to November 6, 2021. We didn’t want to push it back another 12 months, and figured November had a good chance of giving us the cool weather we want. We now have even more time to put all the special touches on our day!