As if art museums aren’t cool enough, throw in a glamorous sequin dress, vibrant tropical florals, and a couple’s bold love – you’ll get something truly captivating! That is precisely what Melody and David’s engagement session was all about. We are in love with the fashionable, modern vibes that Mylyn Wood captured during their session! 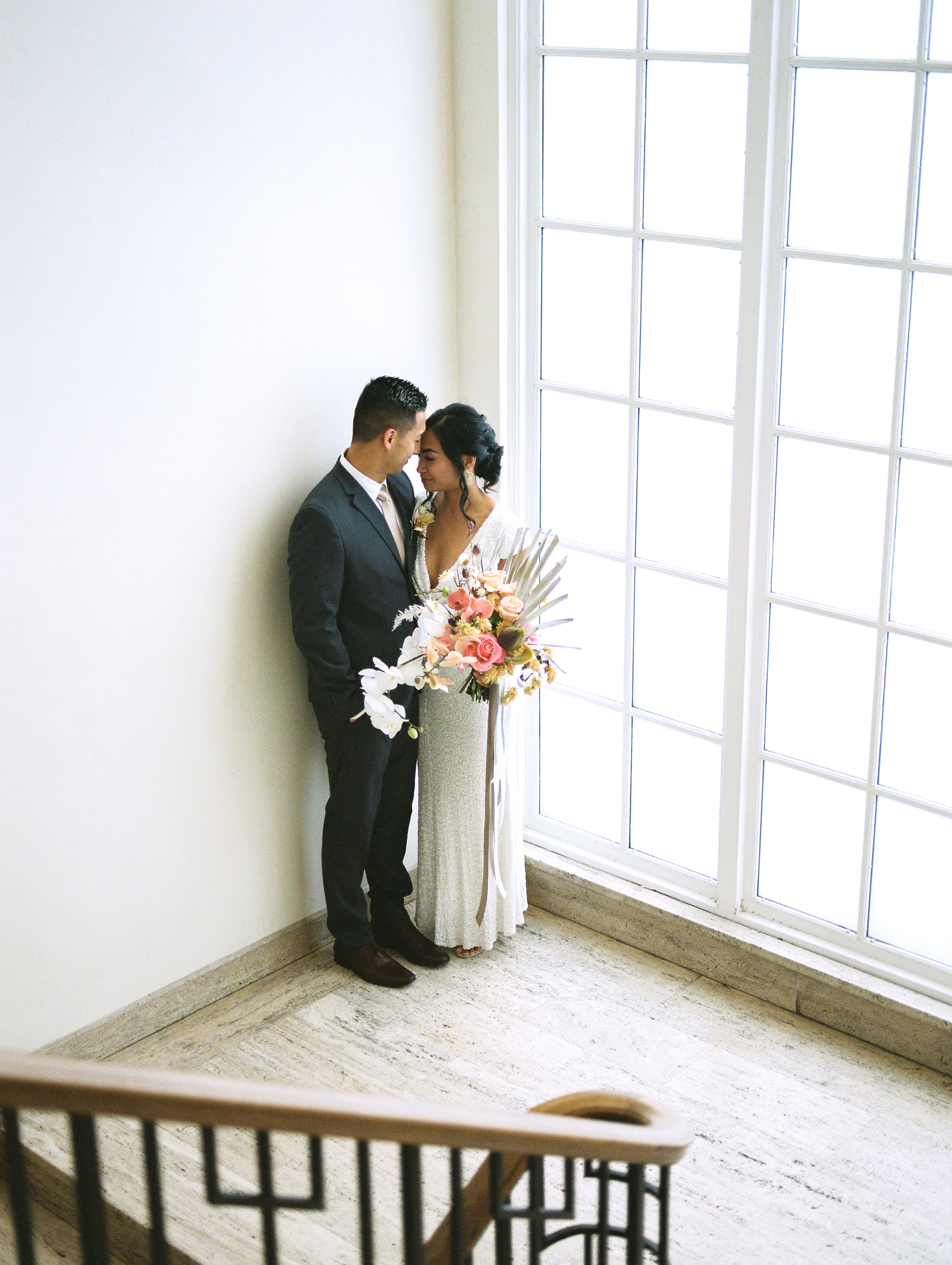 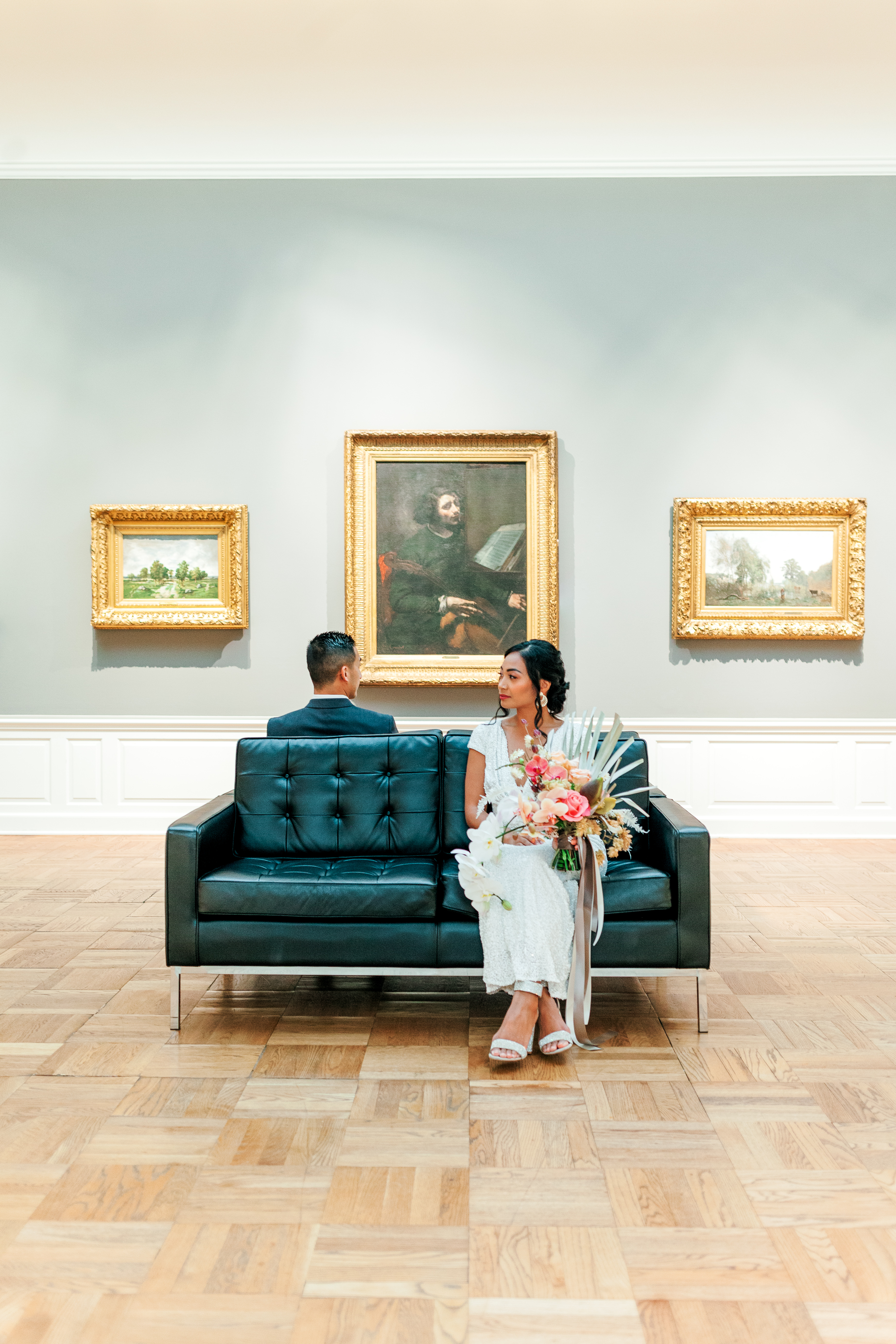 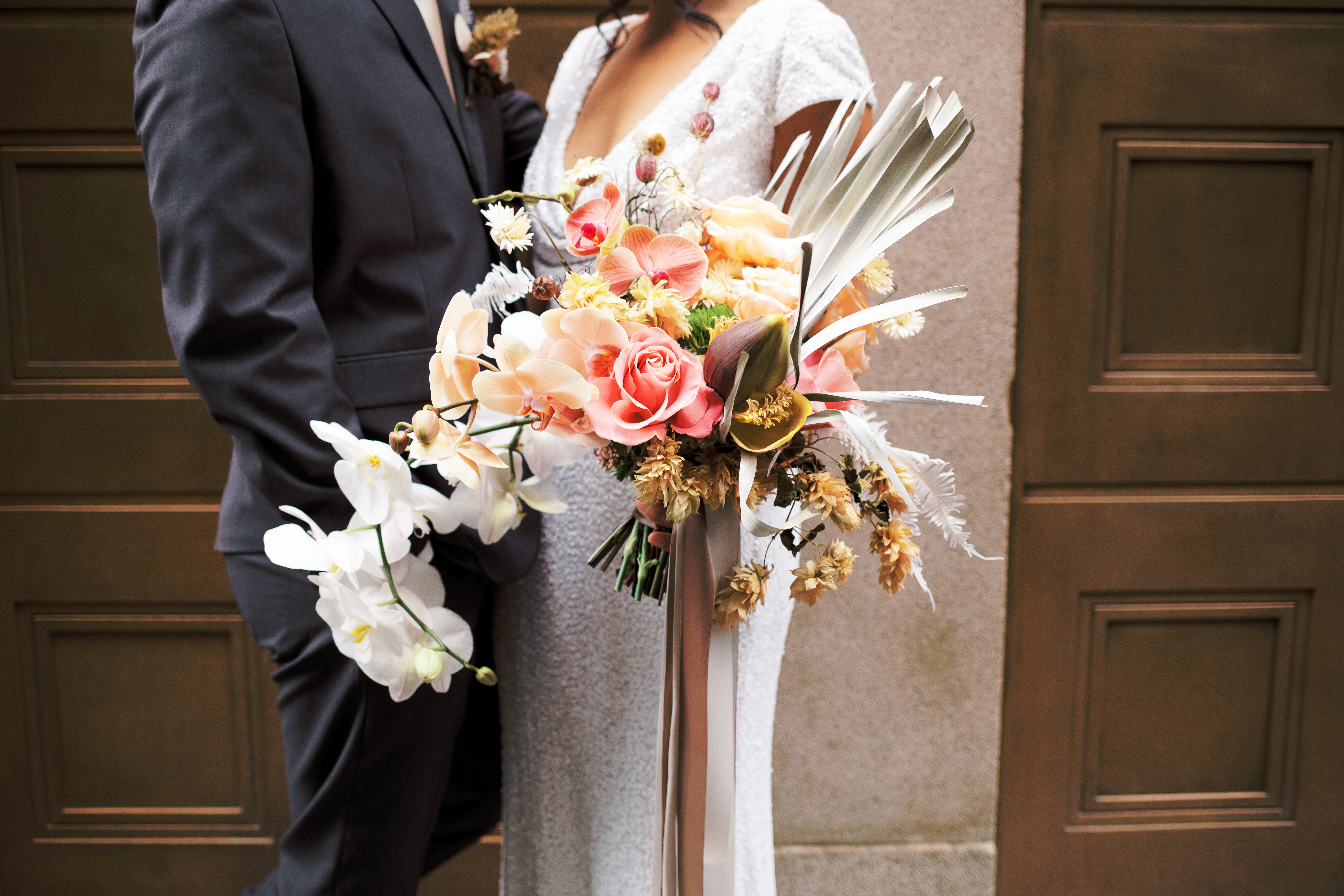 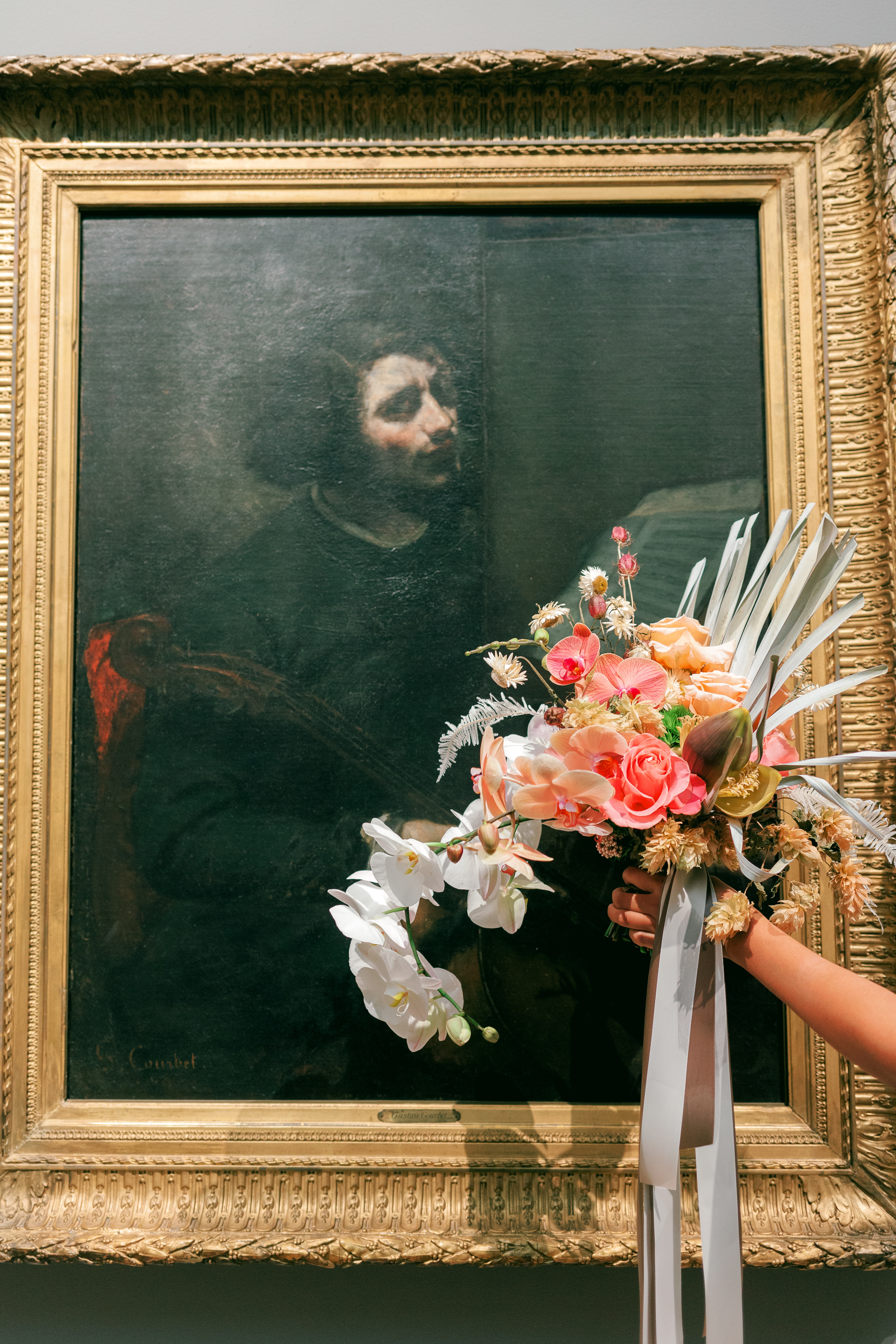 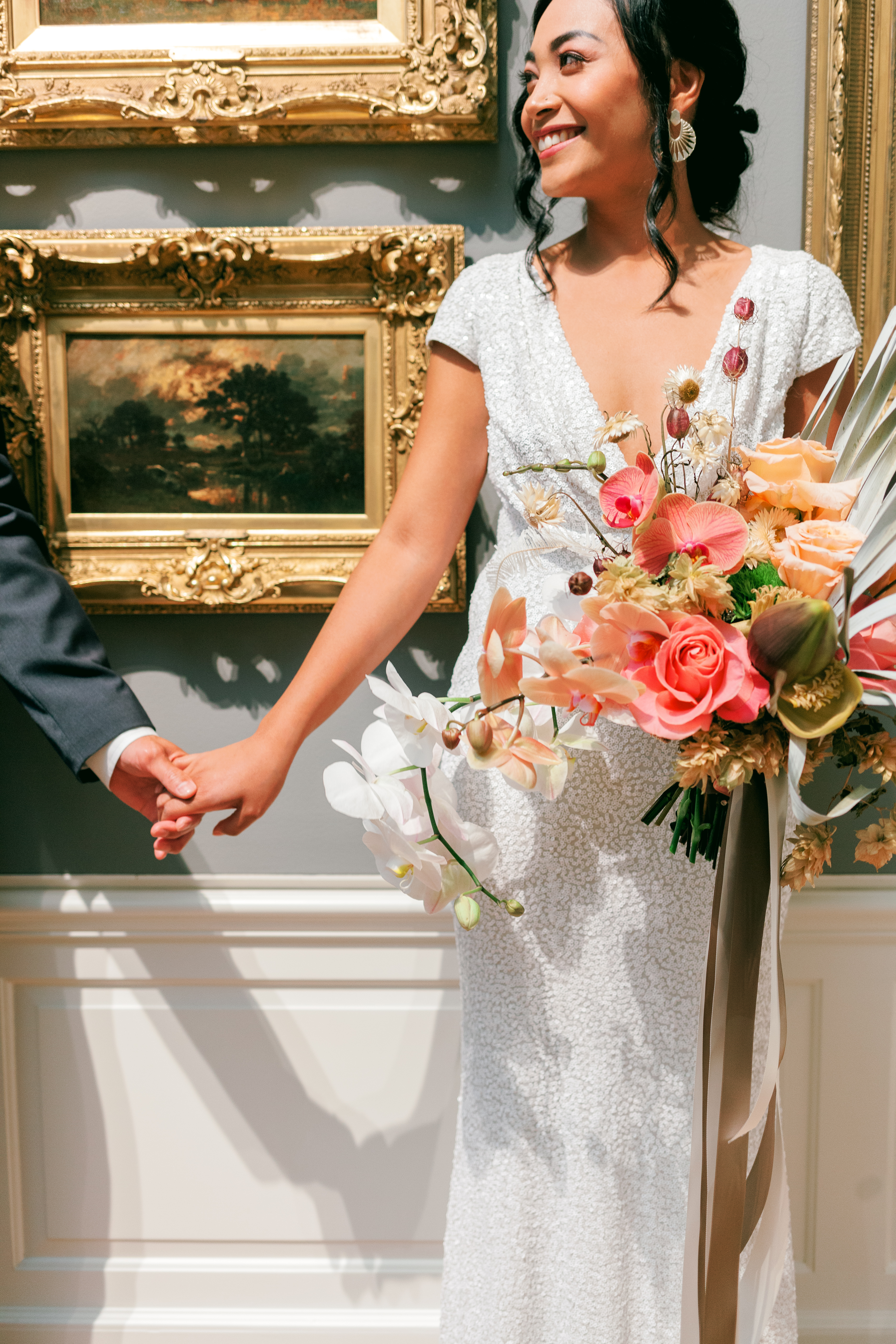 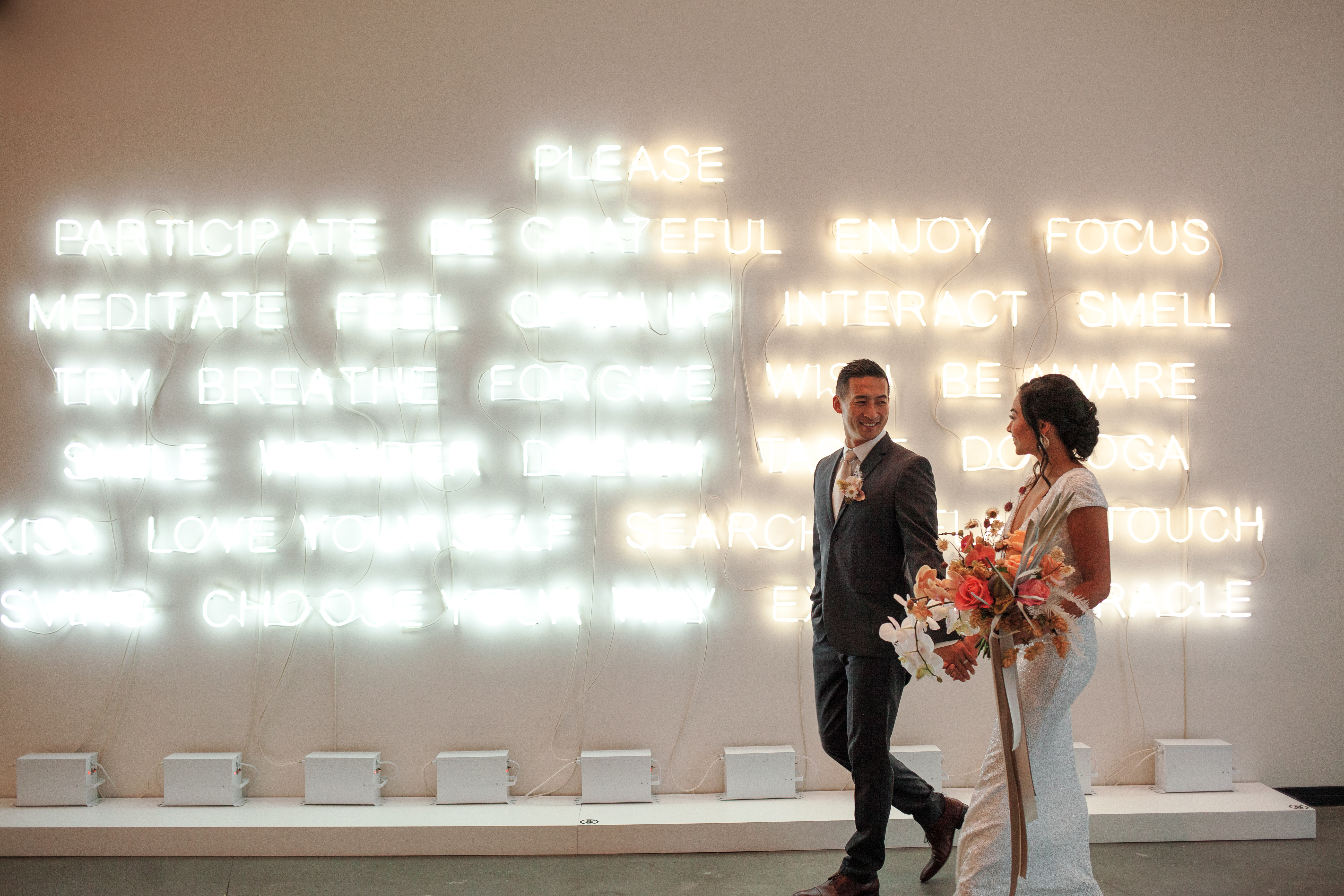 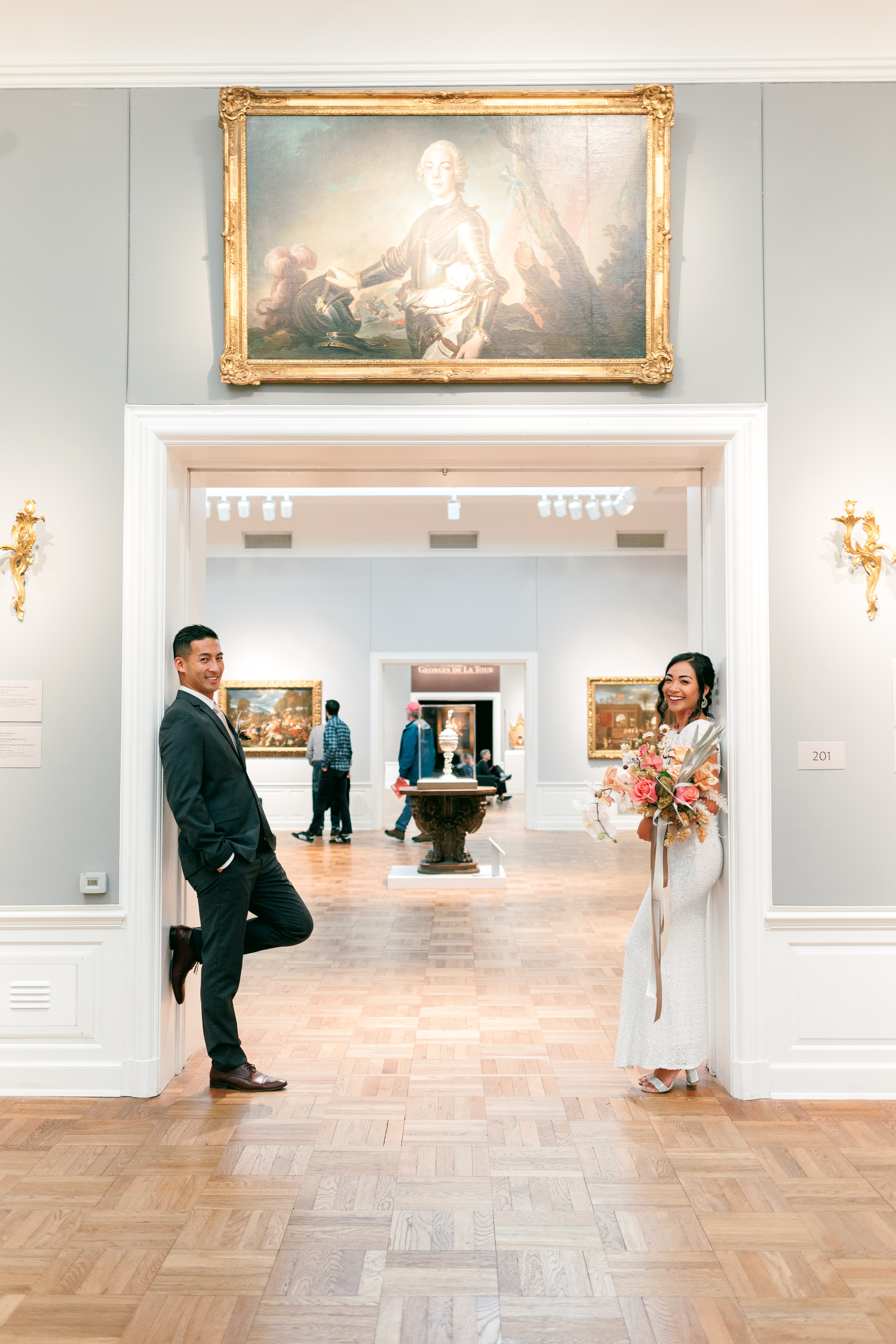 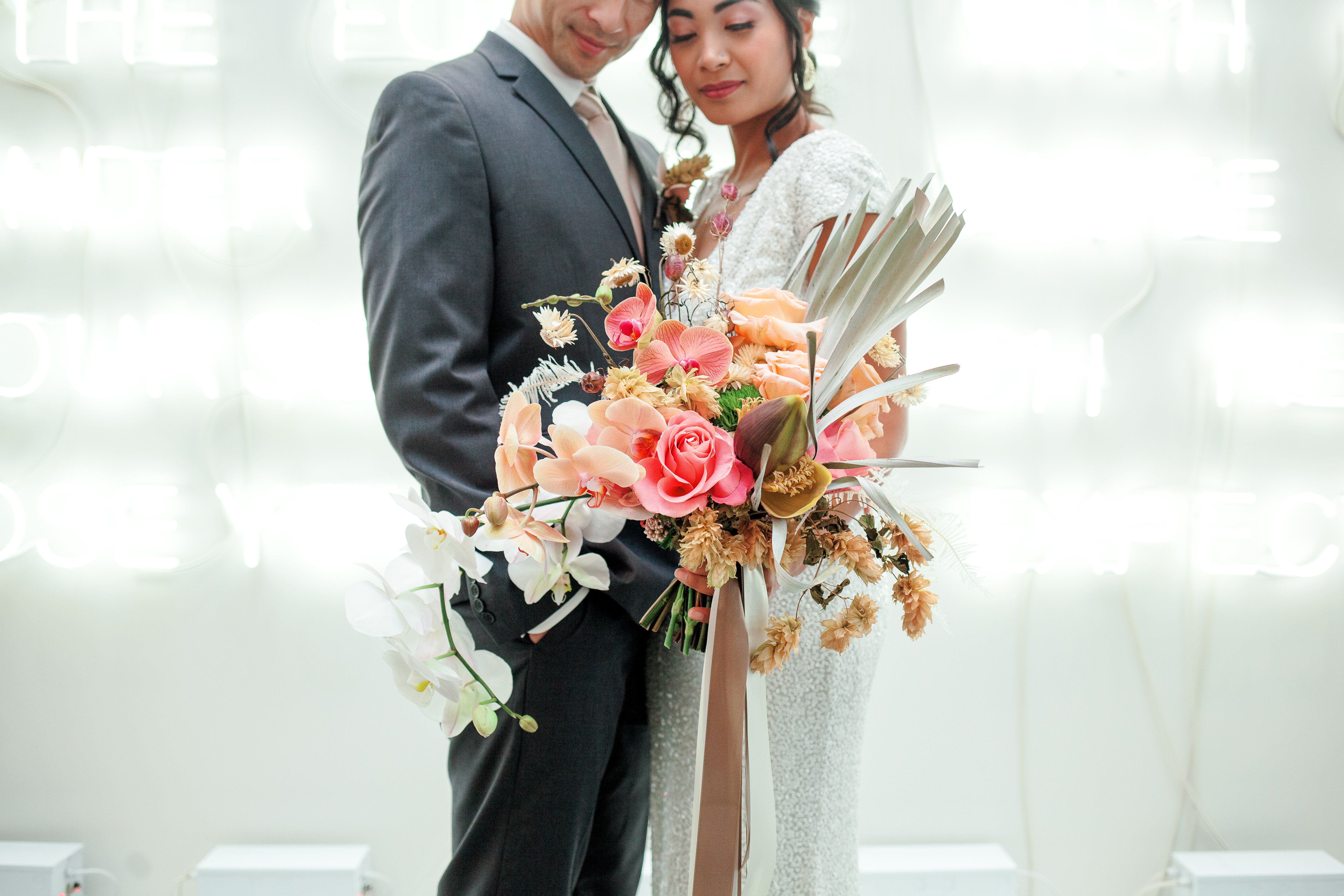 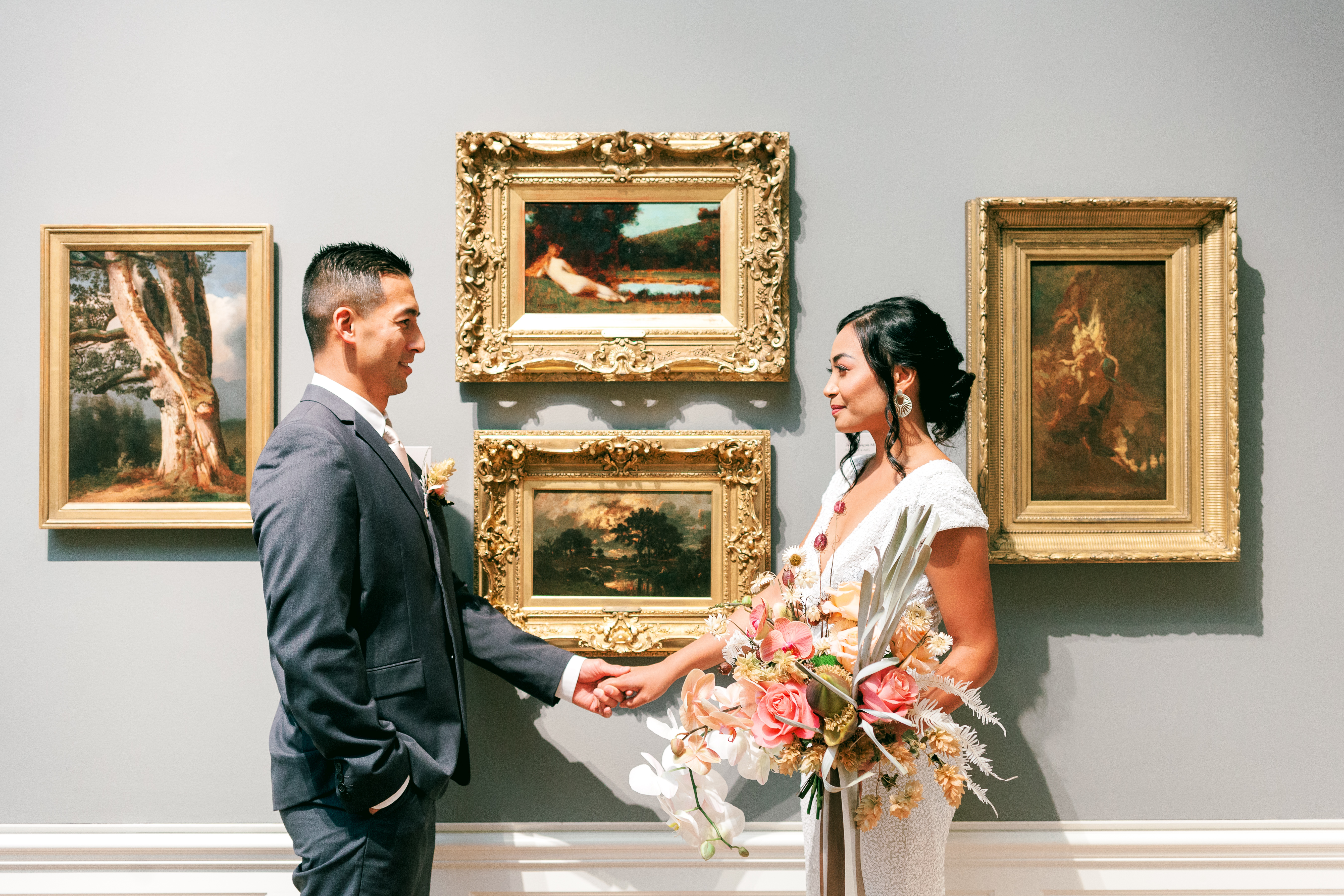 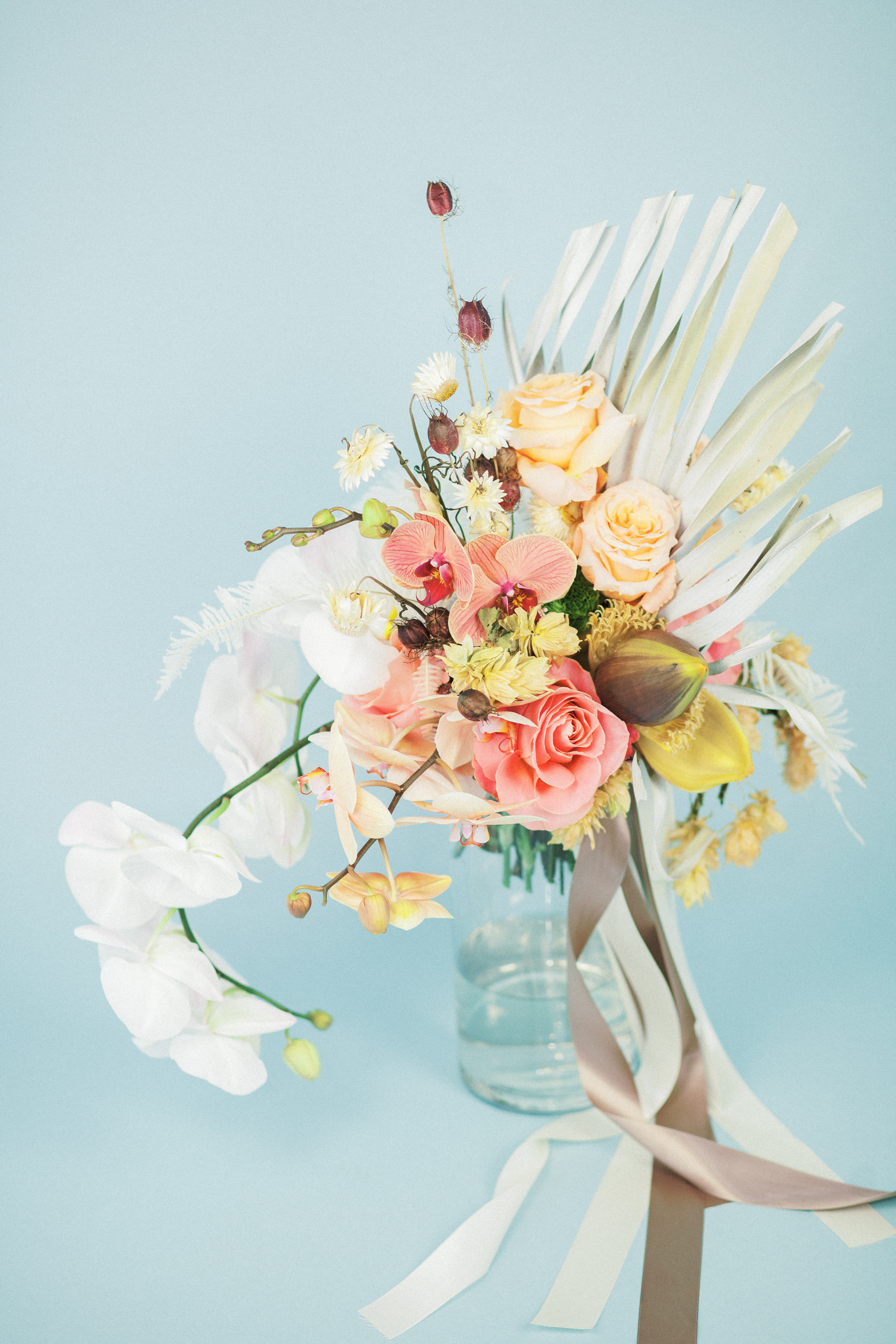 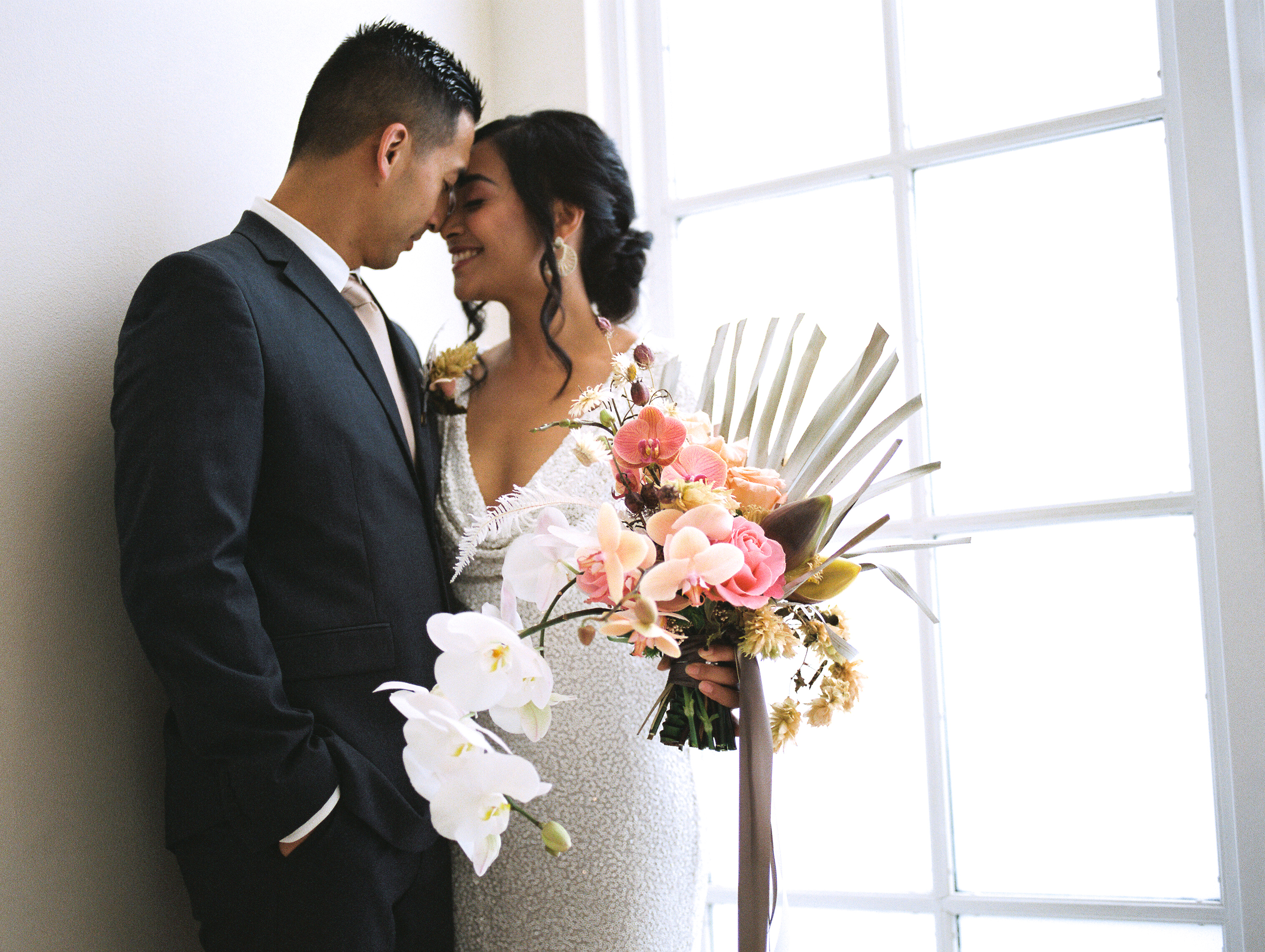 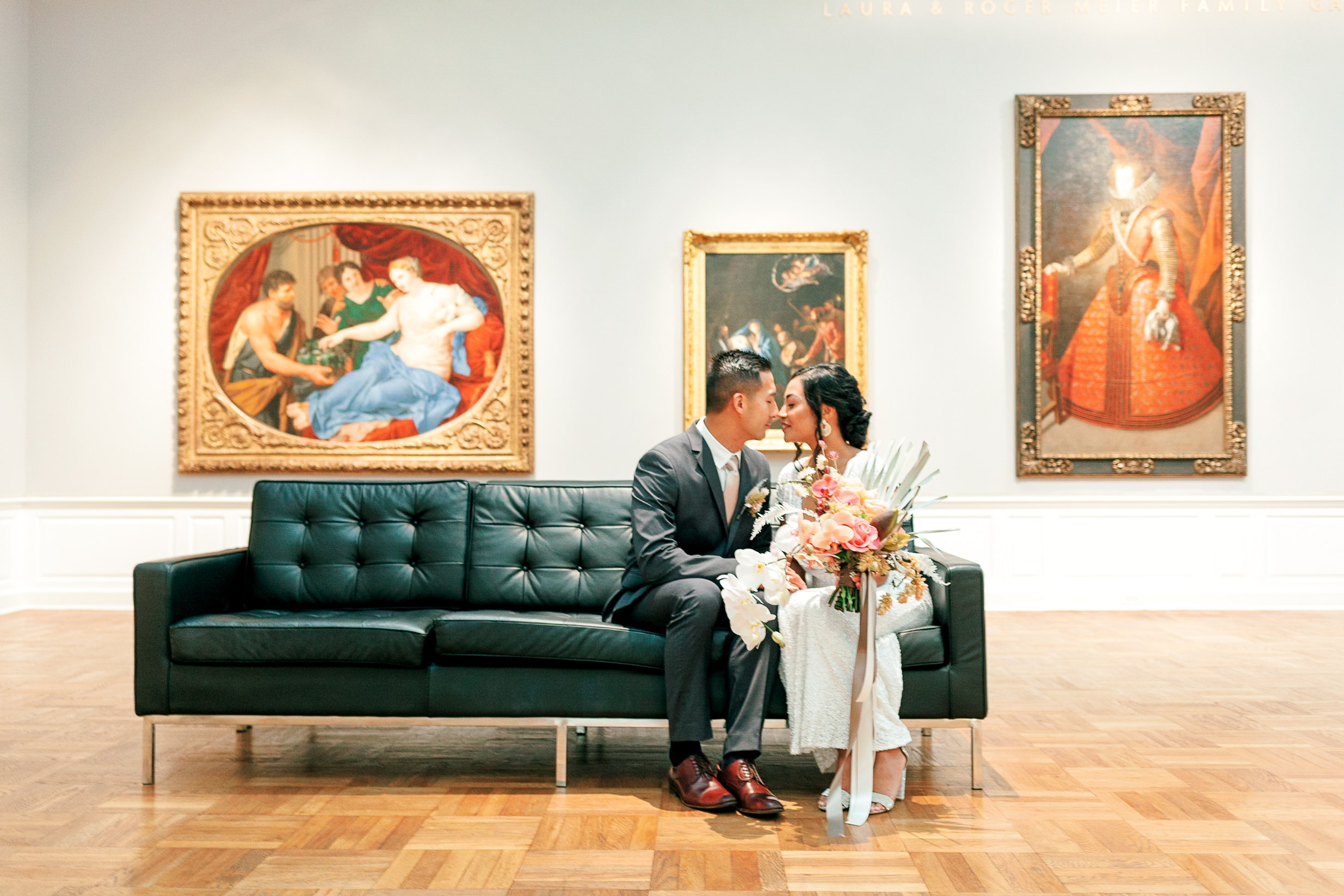 Our story began on Labor Day weekend in 2013 at a birthday party thrown by a mutual friend in Vancouver, WA. At the time, David was in town visiting from Southern California (he was living in Southern California for quite some time while Melody was living in Portland). The party took place at their mutual friend’s parents’ house, and in the backyard was where they had a cornhole game set up. As soon as Melody walked into the backyard, she immediately met eyes with David, who happened to be playing a game of cornhole with his friends. While Melody wanted to play cornhole, she refrained from interfering (in reality, she was feeling a bit shy).

The following month, Melody moved to Huntington Beach to begin her new job at the University of California Irvine Medical Center. On the other hand, David had already been living in Redondo Beach. After another mutual friend formally introduced them, they gradually became friends, not knowing in the near future their whole lives were going to change. It was slow and steady at first with reasons being that they did not want to rush into things and both had different priorities at the time. Then on one sunny day, they decided to spend an entire afternoon at Disneyland aka “The Happiest Place on Earth”. It was that same day the both of them secretly realized feelings were developing for each other. However, it wasn’t until that Spring of 2014, where their friendship grew stronger and stronger, with a strong foundation of loyalty, honesty, and faith, all things they both admired about each other.

From there, any opportunity or free time that he had, he spent it by exploring the world and SoCal with her. They wine tasted in Temecula, kayaked the beaches, spent numerous times at Disneyland, and bar hopped around Hollywood, to name just a few. They even traveled abroad to several different places. Each chance they got, they would spend it with each other, continue to learn new things about each other, and through God, grow closer in love.

The day came on September 16th, 2017. Melody and David planned a day to go wine tasting with his brother and his brother’s girlfriend. After arrival at their favorite winery, Fairsing Vineyards, the worker had conveniently set them up on a hillside table overlooking the vineyards, actually right next to the vineyards. It was a private table, just for the four of them and it was SO beautiful! It was the perfect summer breeze outside. At first, Melody had seen some shadows in the vineyards, but didn’t think too much of it. She kept on drinking her wine while she patiently waited for David to set up the cornhole board he made that he had surprised her with that day. As soon as David set it up, they began their first game of cornhole together. David kept missing his tosses after multiple turns.

After a couple rounds of cornhole, David started to casually tell the story of how they first laid eyes on each other playing cornhole at their mutual friend’s house. It was then that his brother’s girlfriend, nonchalantly asked to take off the floppy hat Melody was wearing (Melody thinking, ‘now that was odd’ with a raised eyebrow). David had mentioned he was going to start the next round of cornhole with some new beanbags (his excuse was that the original ones weren’t winning worthy, lol). As he continued to tell the story about how they first saw each other, he began to throw the first bag (of the new set). He continued on with the story about how Melody became the love of his life early on and how he knew she was the one he wanted to be with. It wasn’t until the third bag was thrown, that it landed and said, “Marry”. After Melody saw that bean bag, she immediately went blank, emotions of nervousness and excitement all at the same time. All she remembers hearing from David after that was, “oh crap”. He walked over to her, got down on one knee, and popped the question! Melody was so caught off guard and filled with excitement, she forgot to say ‘YES’ the first couple seconds!

Soon after, her family and some of her best friends walked out of the vineyard and surprised Melody after witnessing the entire thing! And it was that day, they began to celebrate the next milestone of being engaged; sipping on their favorite wine, with some of their favorite loved ones.