Utah’s mountains are among the most beautiful in the world, and they offer a perfect backdrop for an engagement. Whether you’re climbing to the top of one of the state’s iconic peaks or simply enjoying a hike through the woods, getting engaged in Utah’s mountains is sure to be an unforgettable experience. And there’s just something about being surrounded by nature that makes the moment even more magical.

Rachelle and Shane’s engagement shoot was a full-day adventure filled with multiple stops, unique experiences, and a tremendous amount of love. Shane had proposed to Rachelle on Christmas Eve in the Bahamas, and for their engagement photos they were super excited to do something adventurous closer to home. They planned this shoot to be truly epic, encompassing different scenery, different emotions and looks, and a truly unique natural occurrence. There were a couple of other landscape photographers in the background taking their photos, and then just us. No other couples, despite how popular this site was. So Rachelle and Shane did their thing, dancing, playing, and having a good time while the sun shone all over them. They then moved on to the intimate part of the shoot, in a private oasis They found away from the crowds. They spent the rest of the morning playing in the sand and in the massive shadow of an enormous tree that covered one side of the cliff walls. They even climbed up as if they were Tarzan and Jane, swinging from the branches. Later in the evening, they moved onto Dead Horse State Park where they danced and took in the views of the massive valleys, mountains, and red rocks before us. After the sunset, they took our lanterns and explored the area, shining bright as the stars came out. 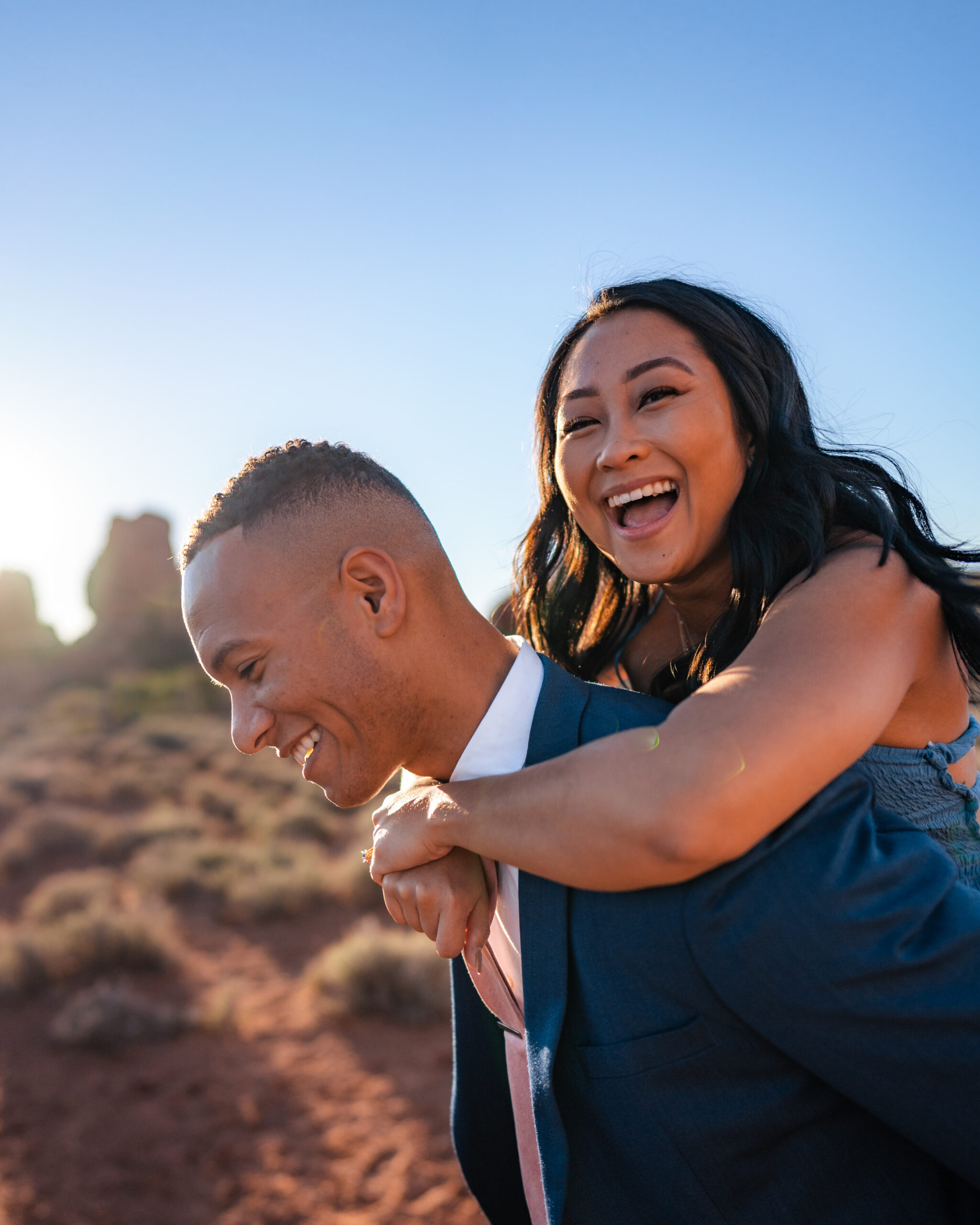 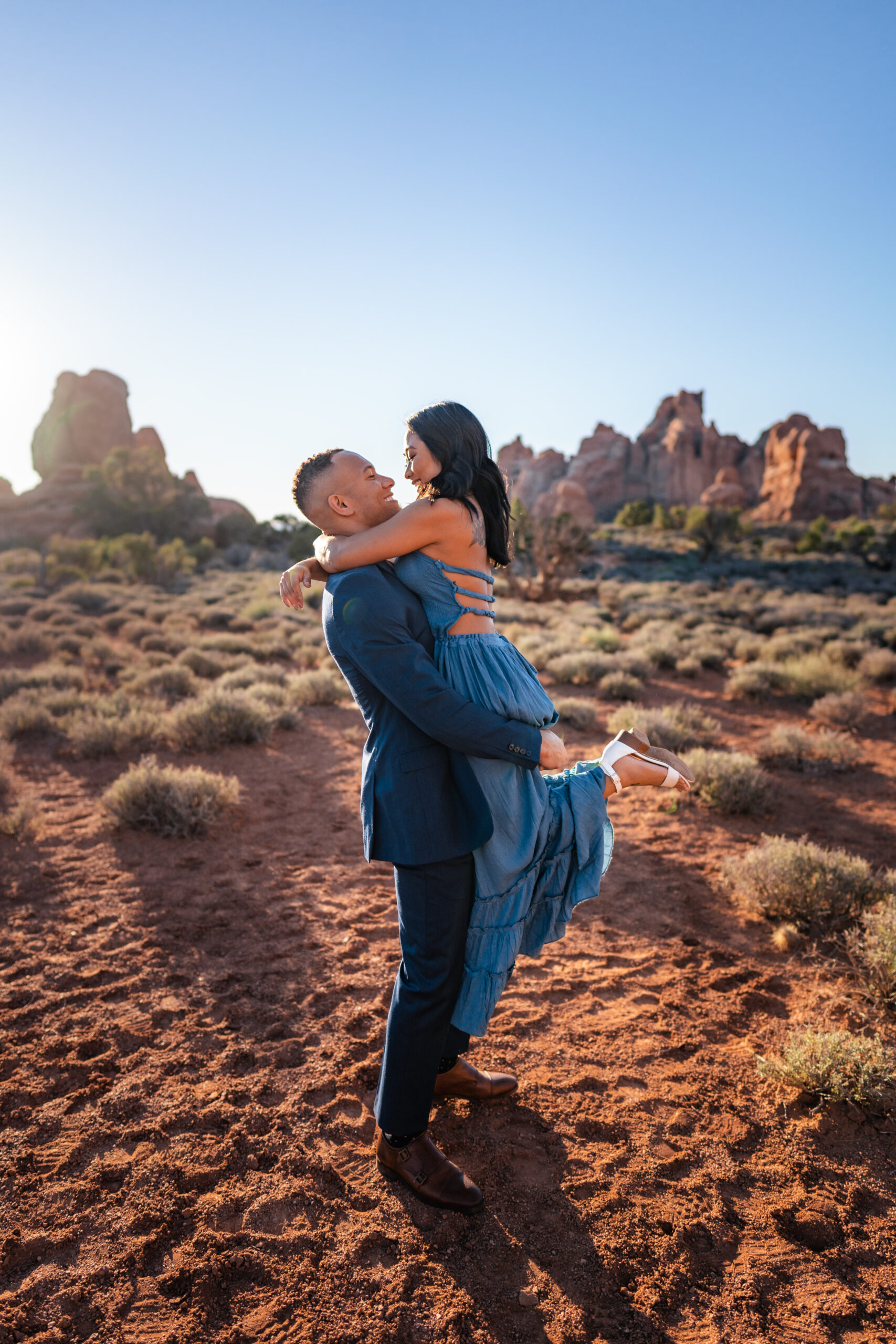 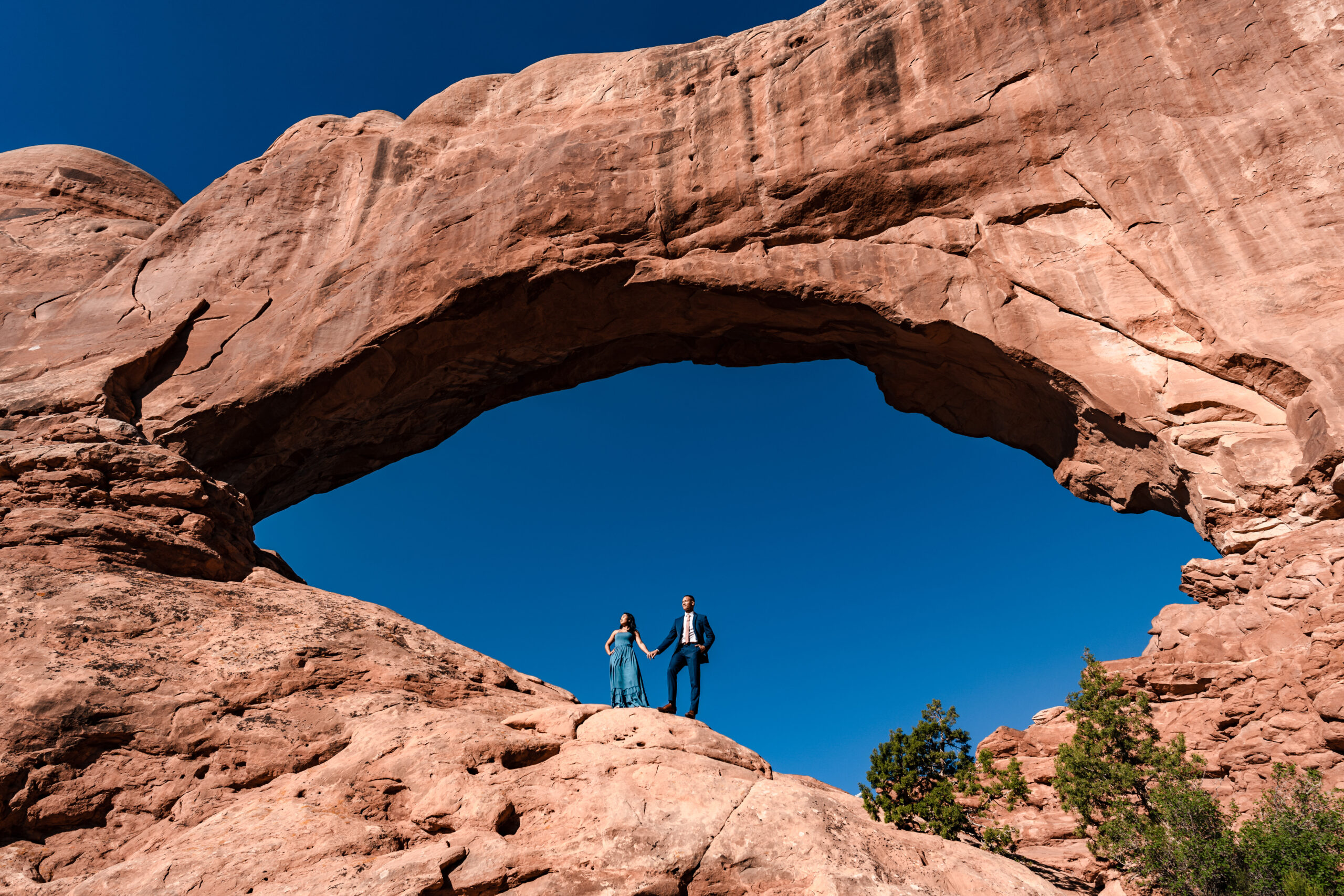 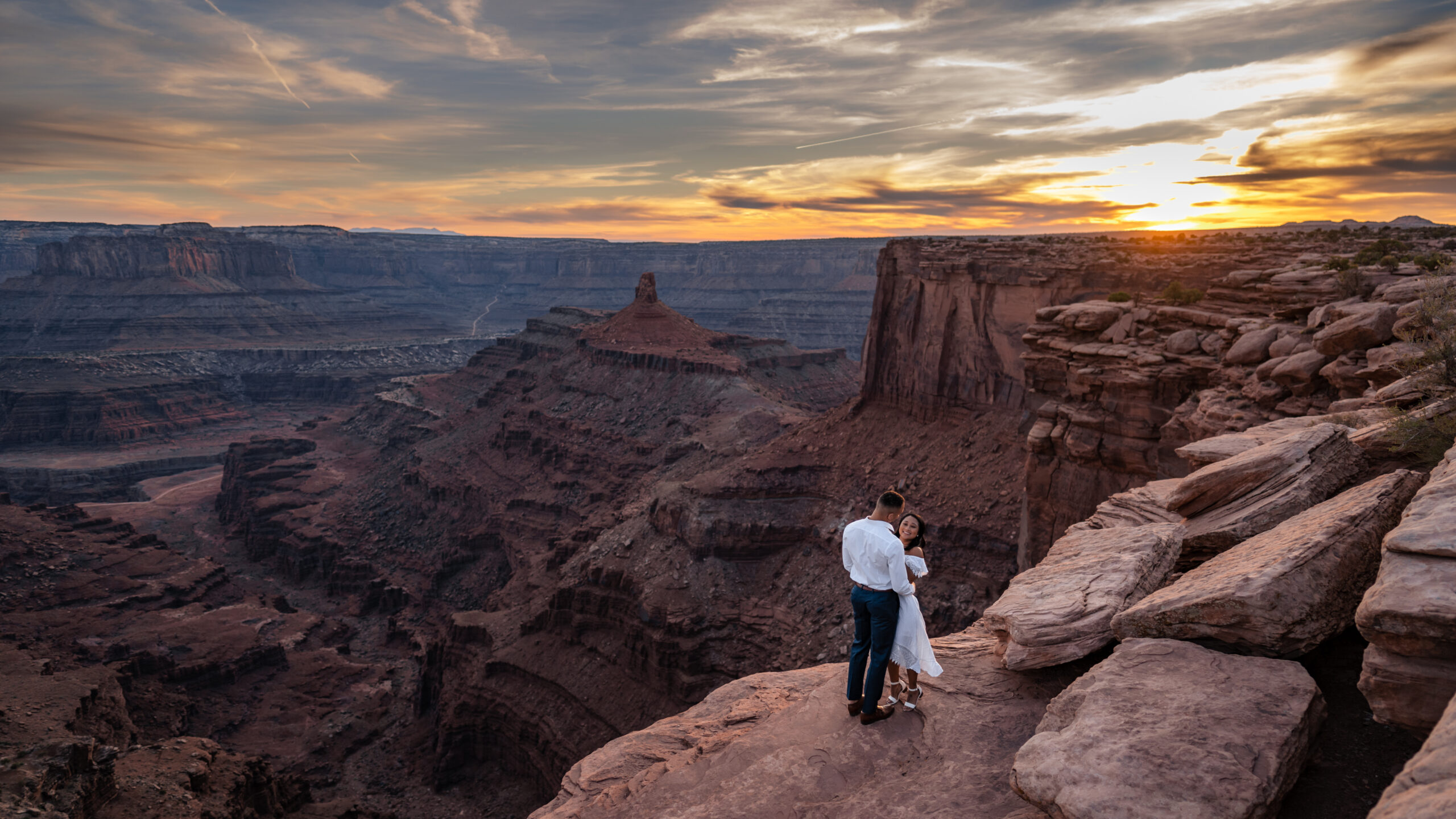 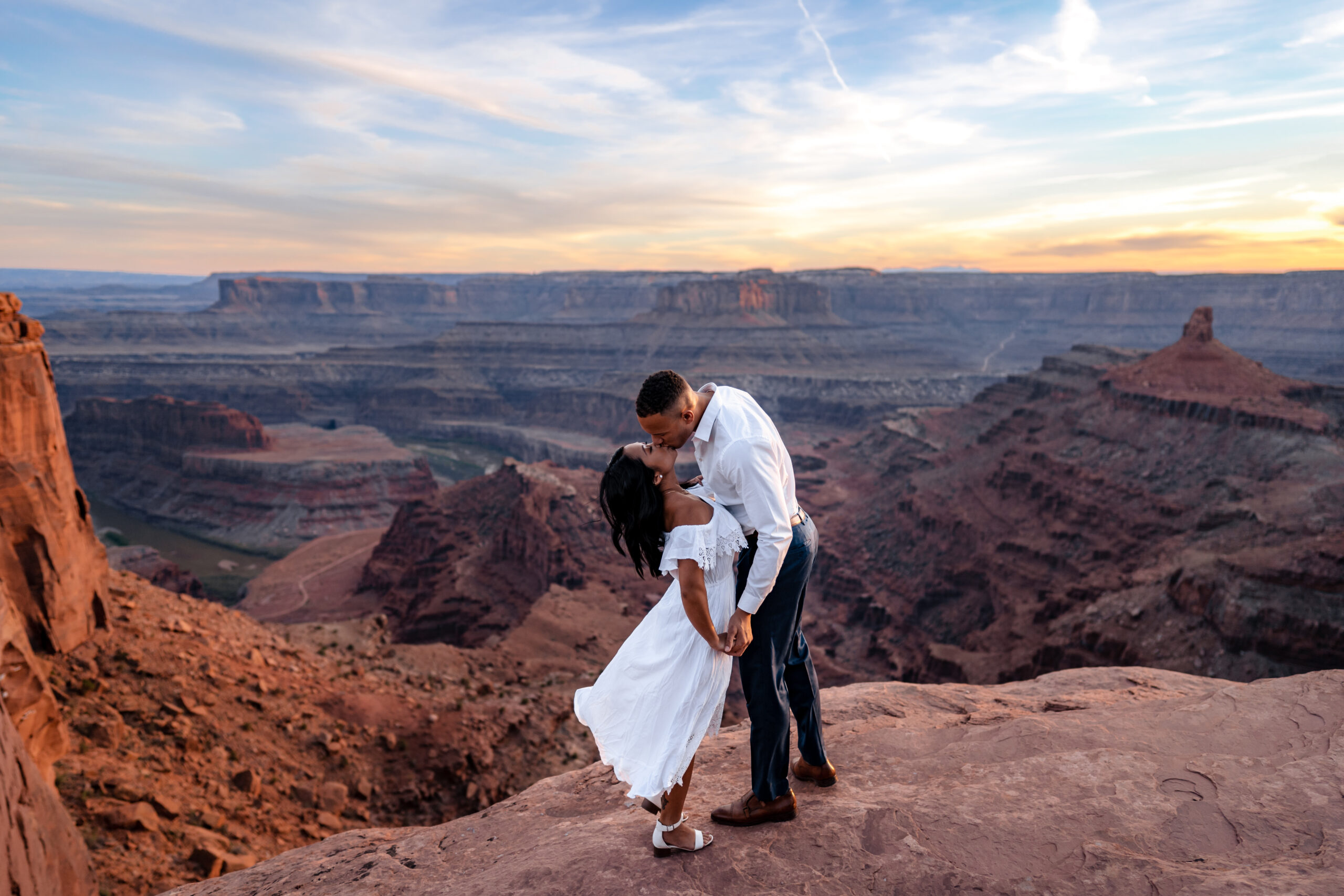 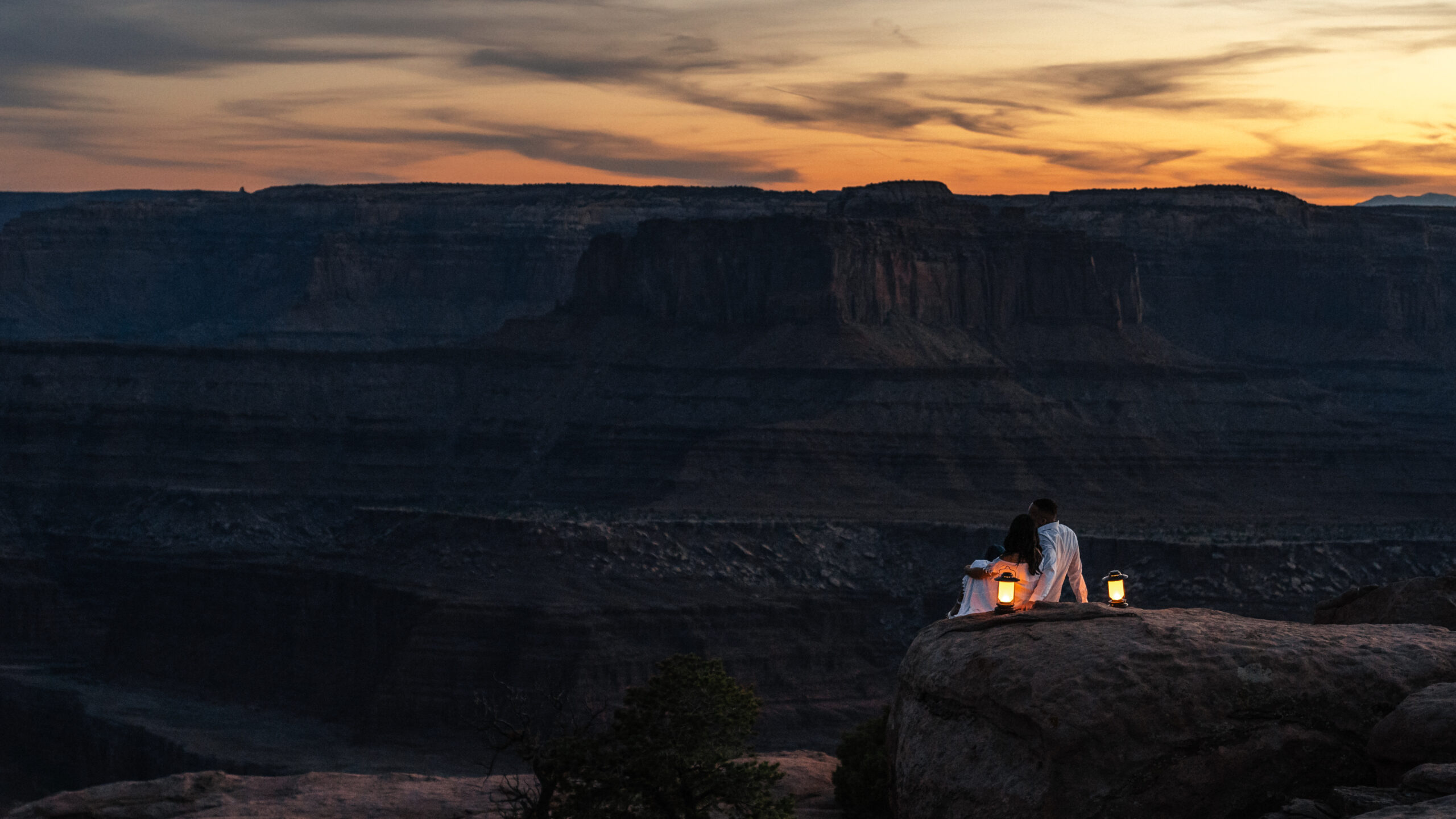 We met during military training in Mississippi. We lived in the same dorms and Shane was working the front desk one day, while I was in the study room right across, studying for an exam and we started talking. Eventually, after a month of us meeting, I graduated training and went back home to Arizona, so we kept a long-distance relationship until he finished training and moved back home to Utah. Shortly after that, I moved to Utah to be with him.

We were in the Bahamas on vacation over Christmas and New Years and he proposed on the beach. He set up the camera to pretend to set the timer and take a picture of us, but what I didn’t know is that he had actually started recording a video. He proposed to me with the ring inside one of those toy balls you get after you put a quarter in the machine and twist the knob, because I had had a dream months before that he proposed with a toy ring! Of course, he bought a real ring in real life.

The ring is made with a rose gold band. The stone is a teardrop-shaped tanzanite surrounded by diamonds and on the band are diamonds on each side of the stone that wrap around the band just enough that it covers the front of the band, but not all the way around.

Our engagement shoot had 3 outfit changes. The first one, I wear a long, blue flowy summery dress, that had light ruffling and an open back and a halter tie around the neck. Shane wore a full navy suit with a light pink solid tie and brown shoes. The second outfit was for the intimate shoot, where I wore black lingerie (bra and underwear) and Shane wore blue boxer shorts. For the final shoot, I wore a midi length white, off-shoulder flowy dress with white sandals and Shane wore a classic white button up top with the first two buttons unbuttoned, navy trouser, and brown shoes.

What is your wedding date?