What Nicole thought to be a casual stroll through a beautiful estate in Asheville with their puppy, Fox, turned out to be the most romantic surprise proposal! Jessica Merithew Photography set up as a stranger waiting for another family to arrive for a photo session when Jason smoothly asked her to take a quick photo on his phone of the three of them. It took Nicole a couple of seconds before she noticed Fox’s new collar and the opened ring box. Following the proposal, the couple enjoyed strolling around the lawns of the gorgeous Biltmore Estate. 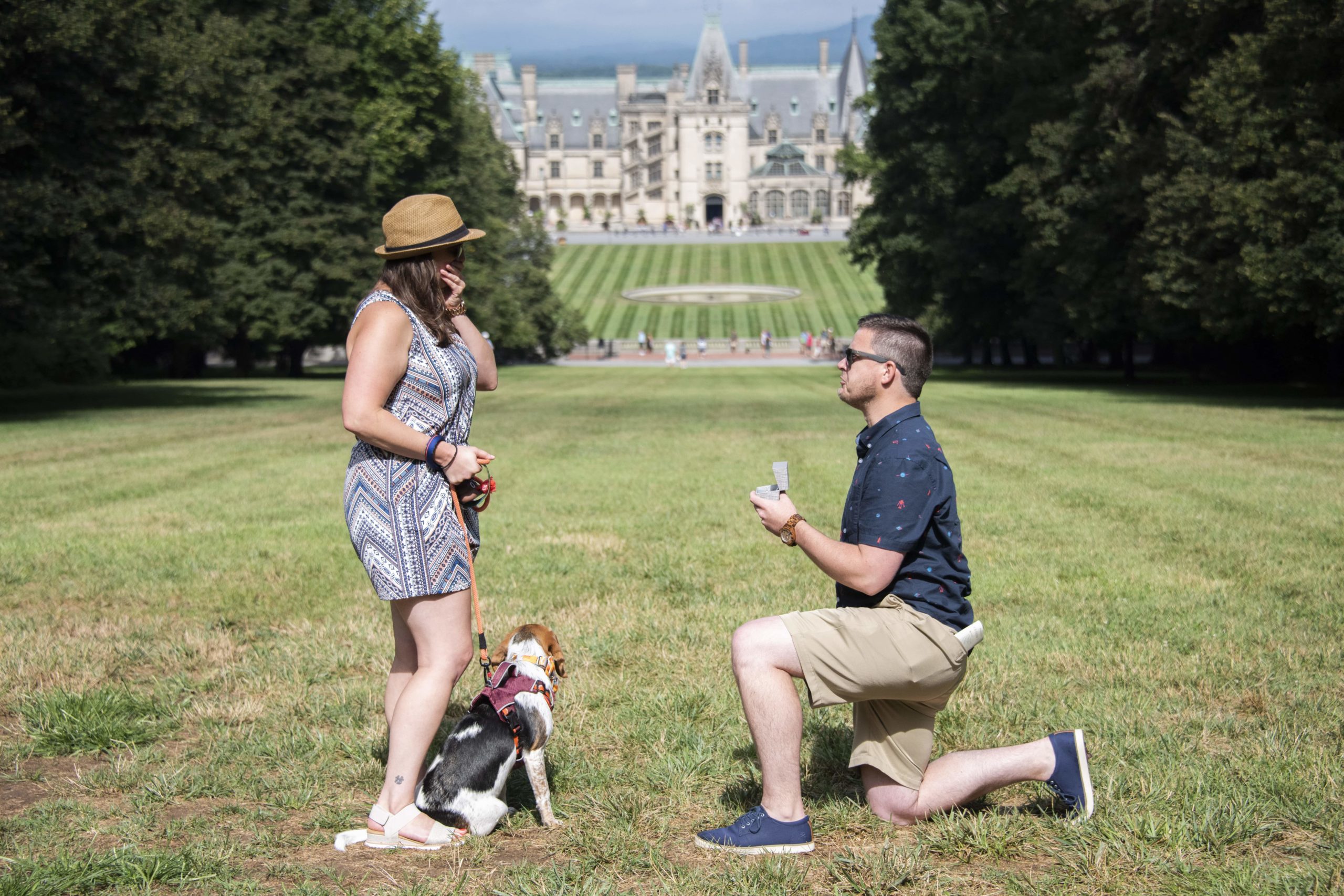 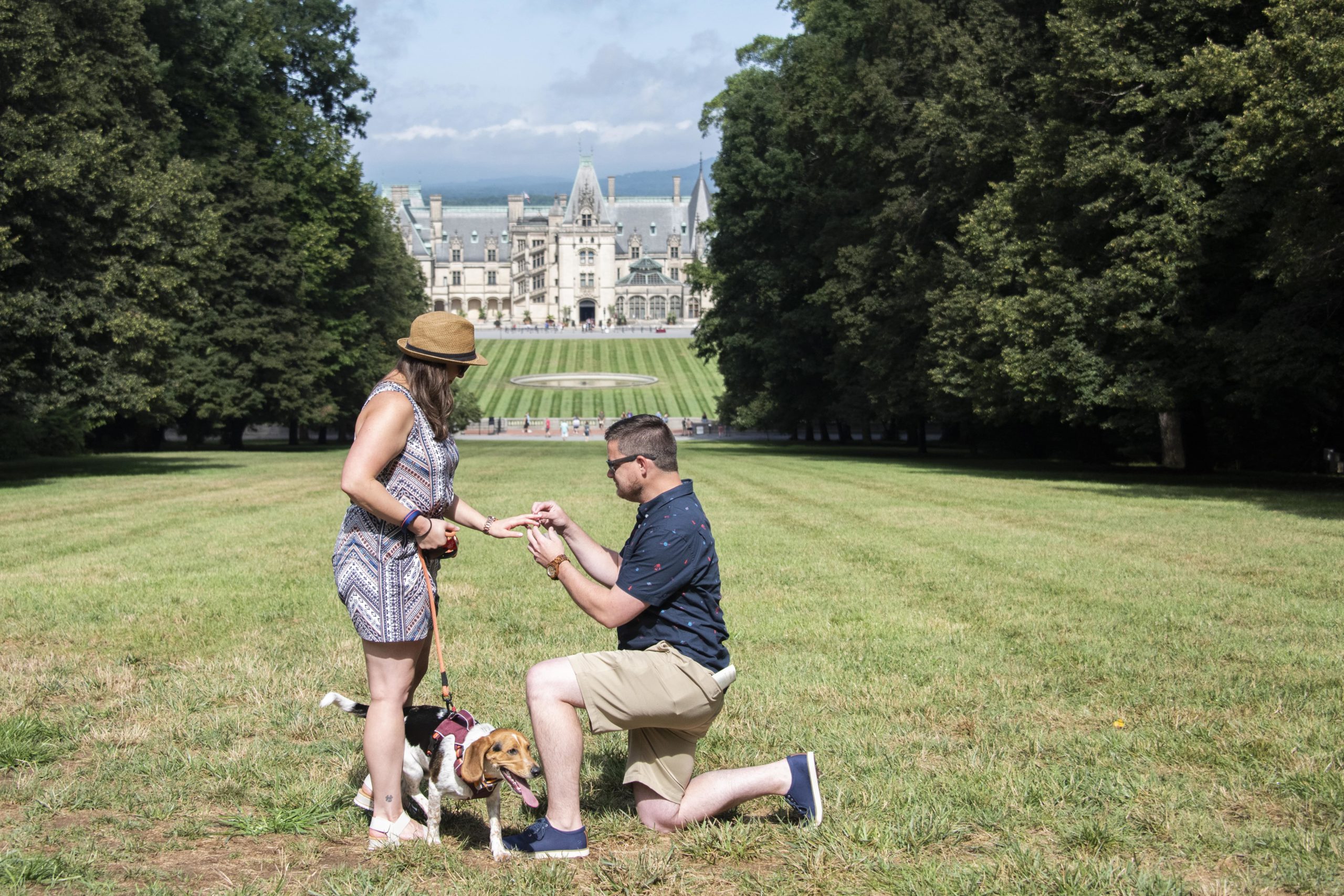 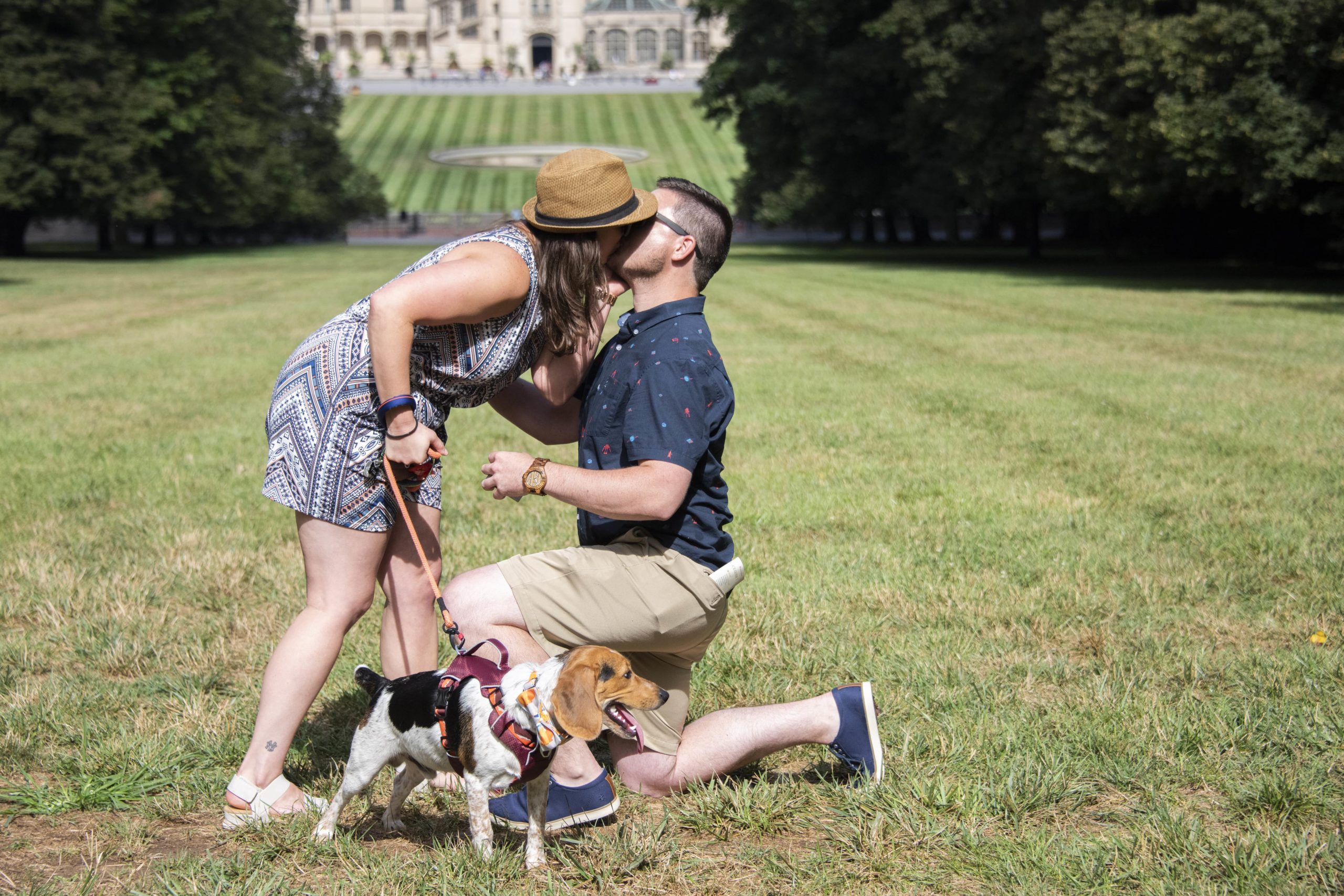 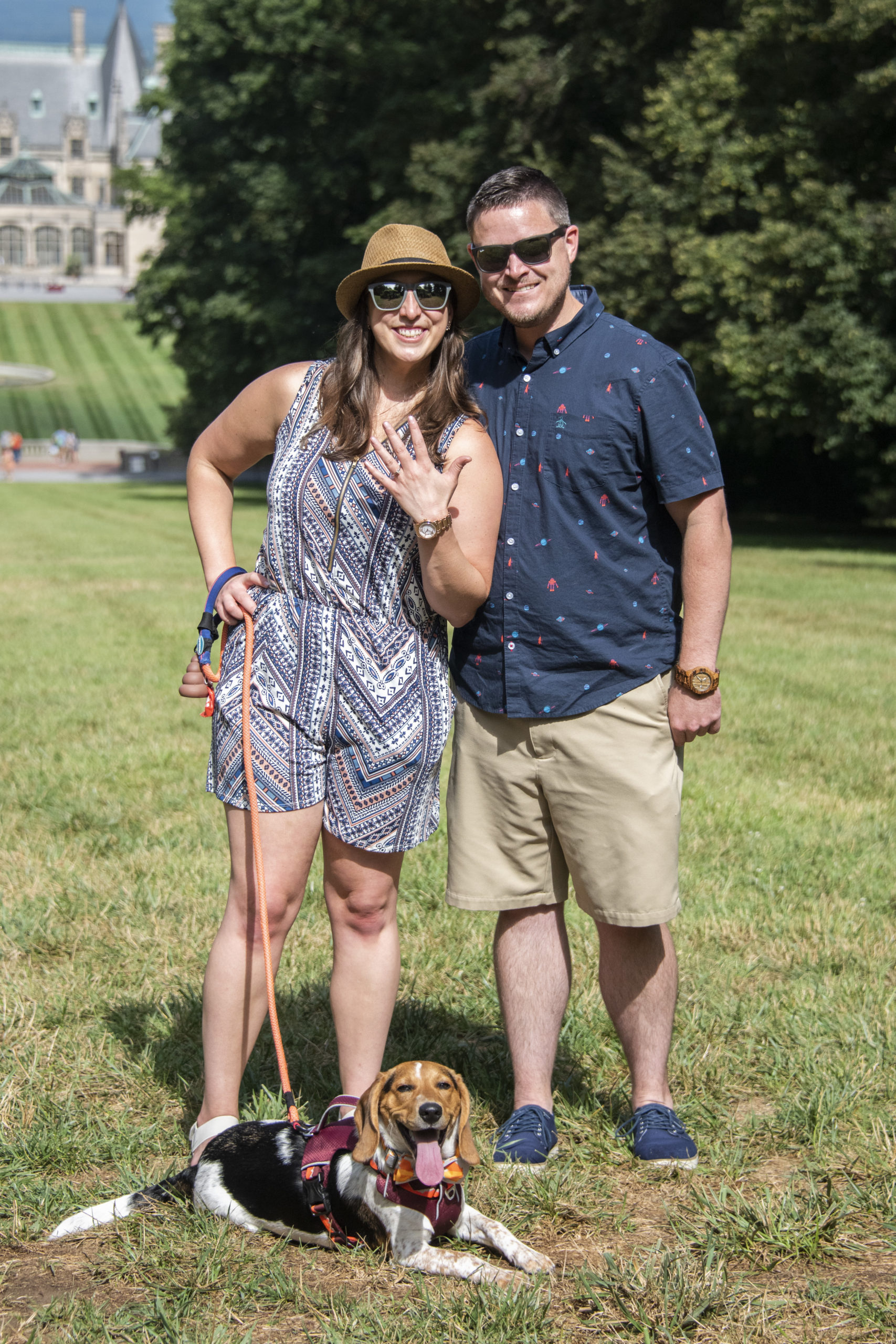 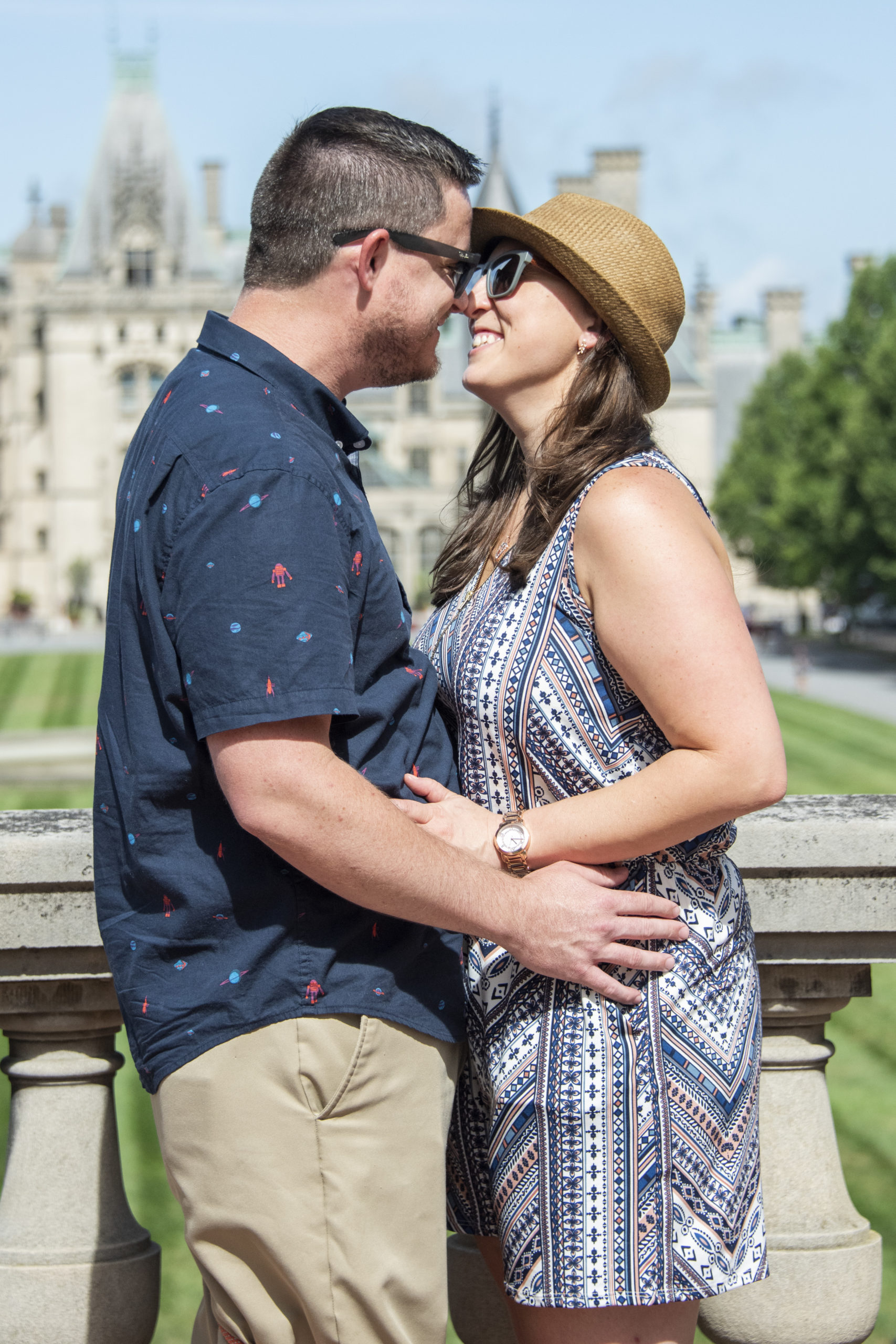 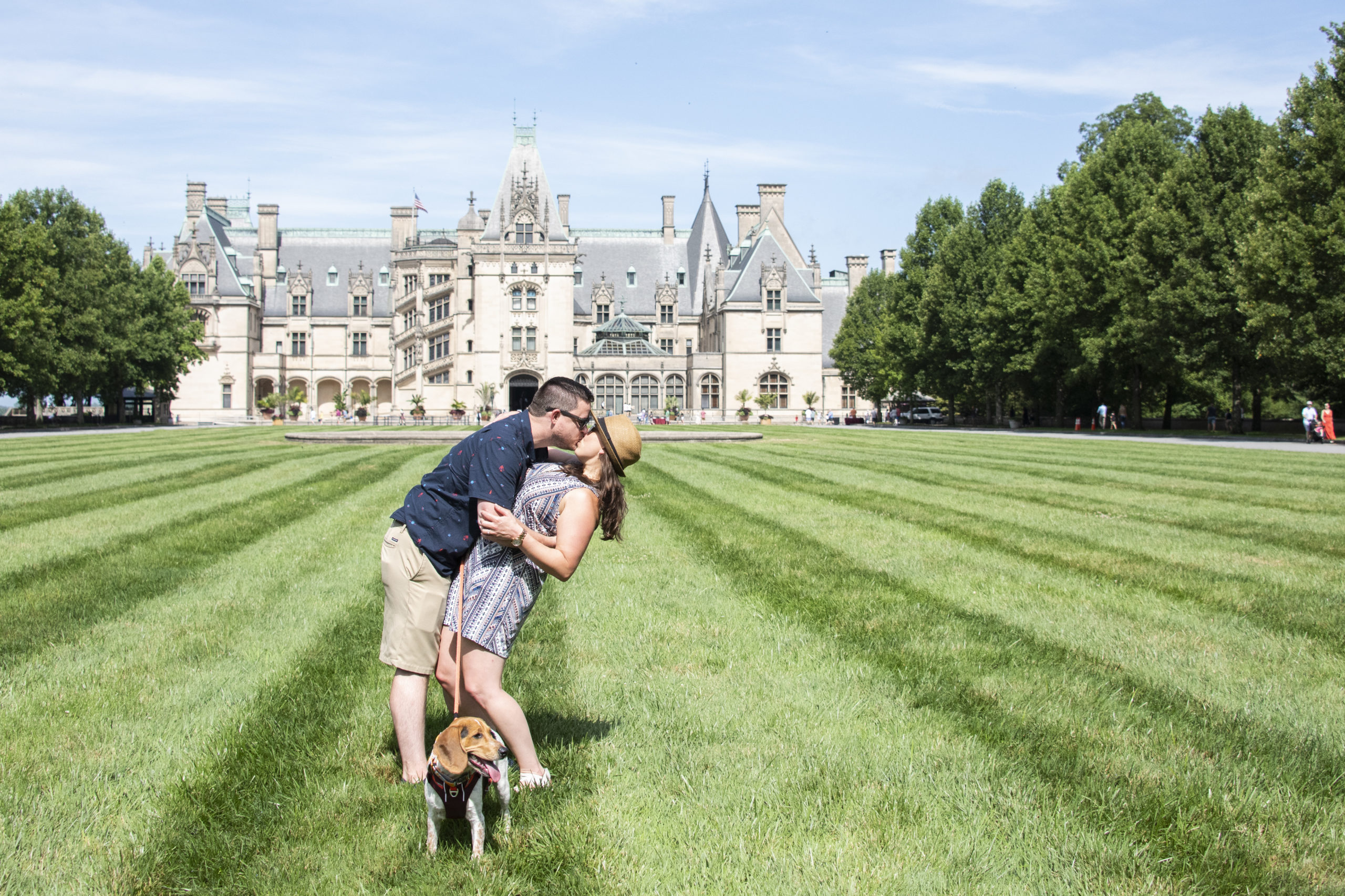 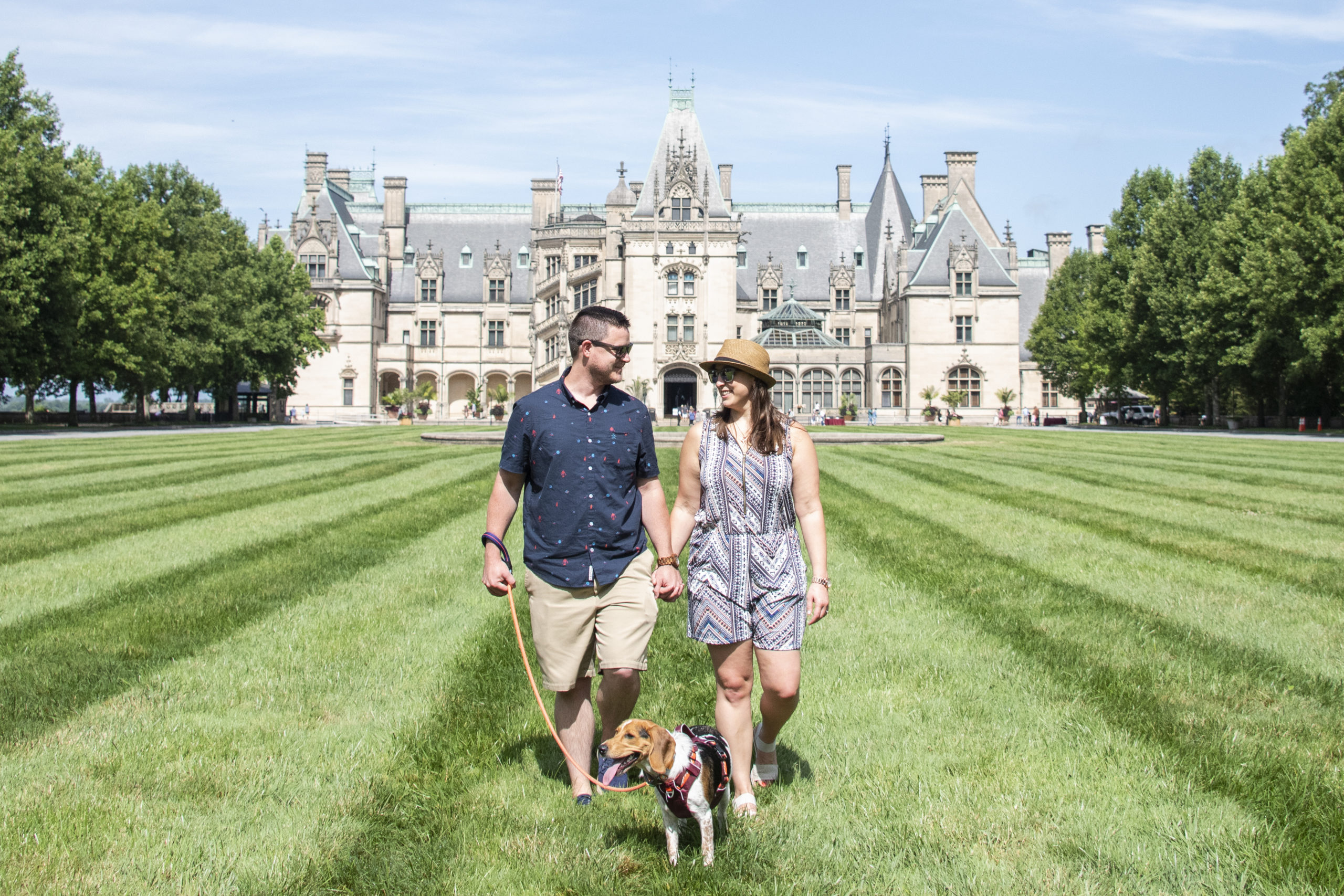 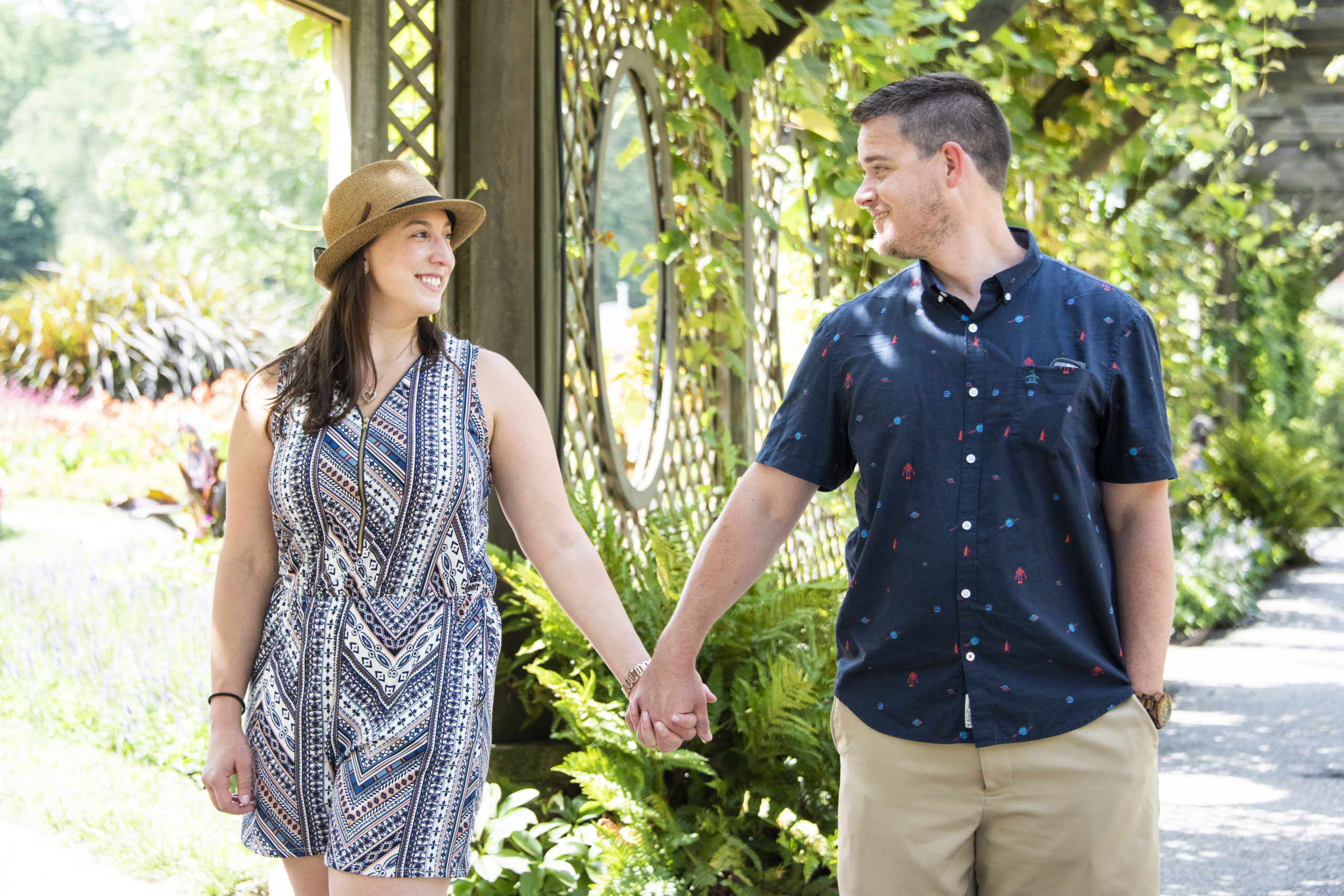 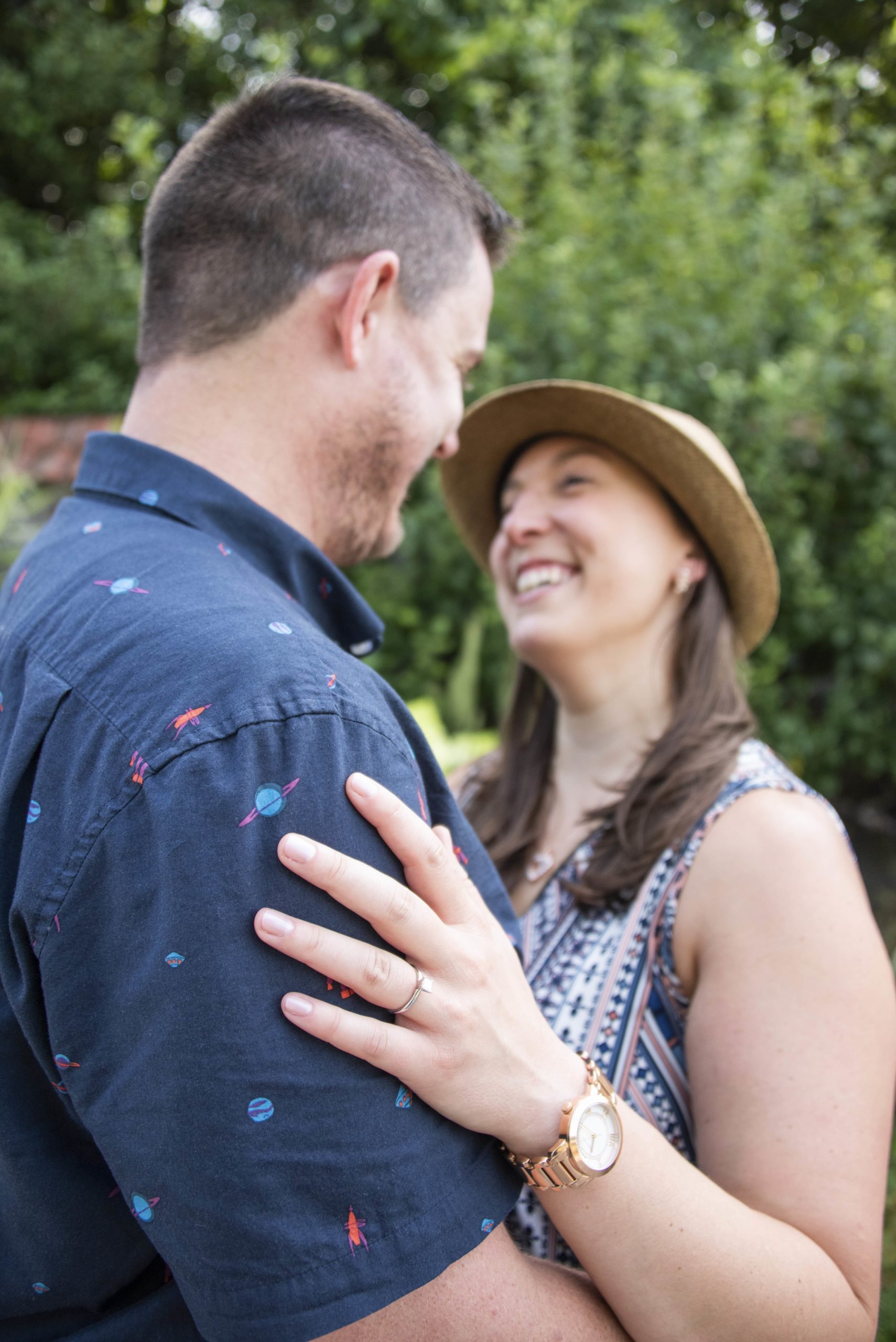 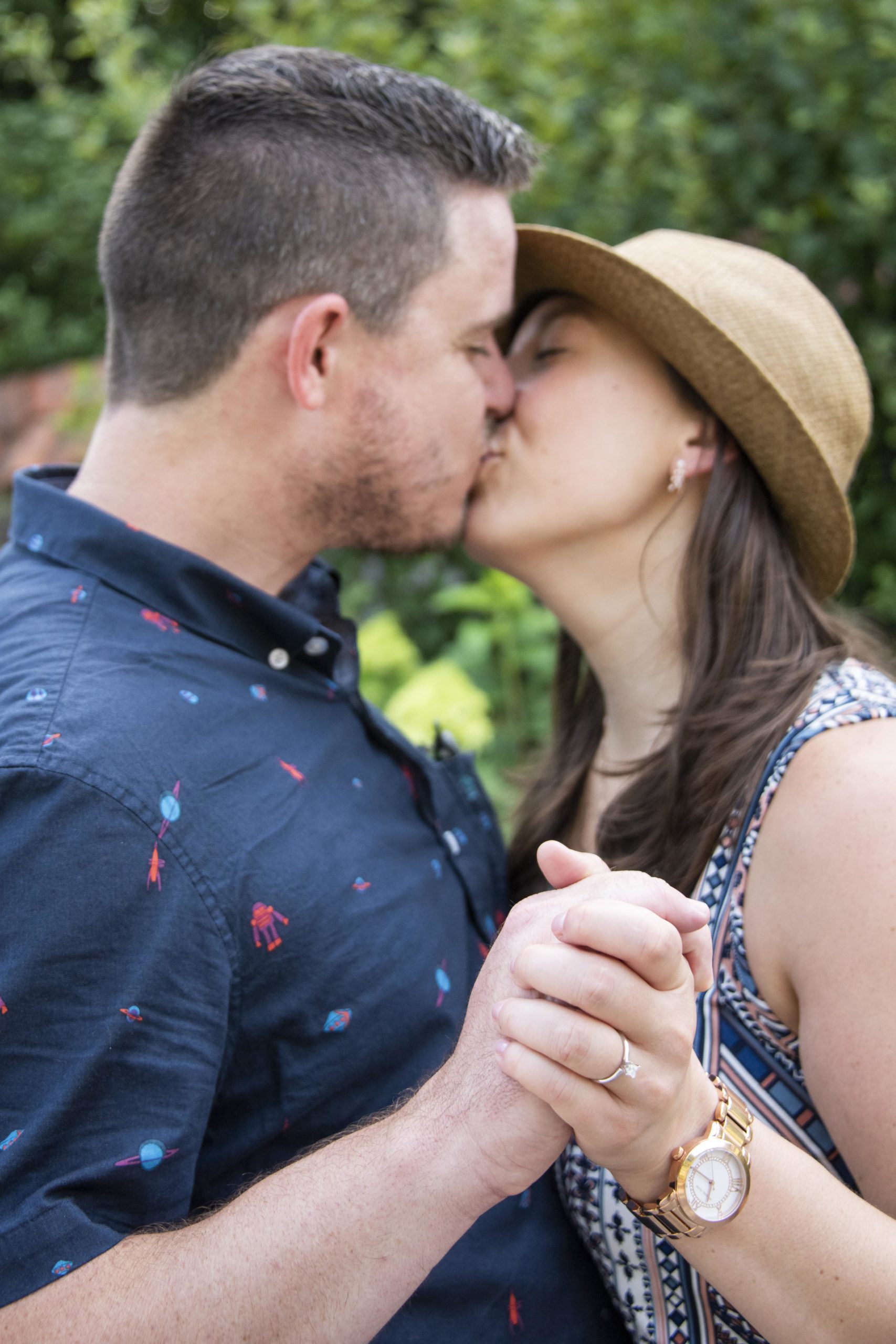 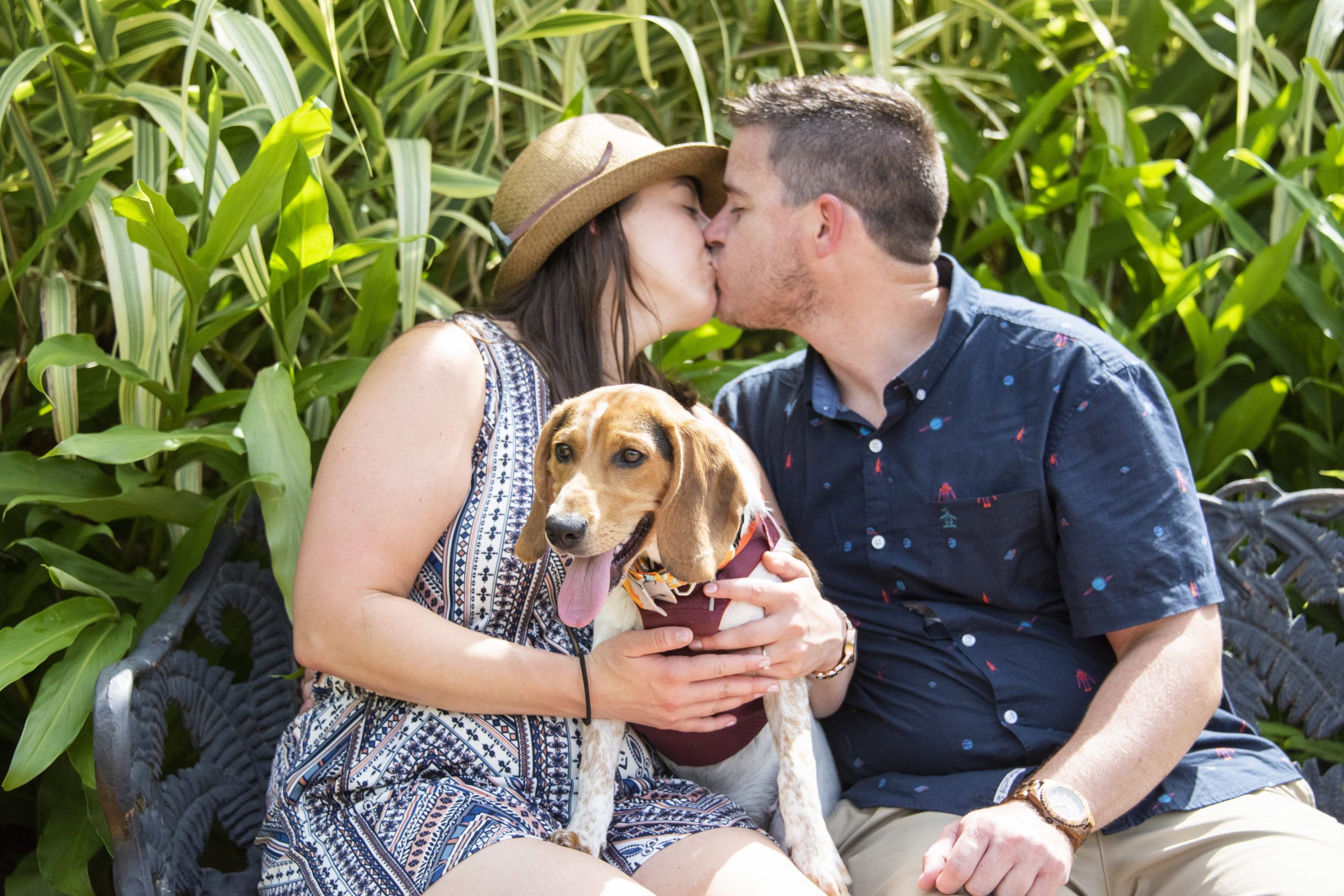 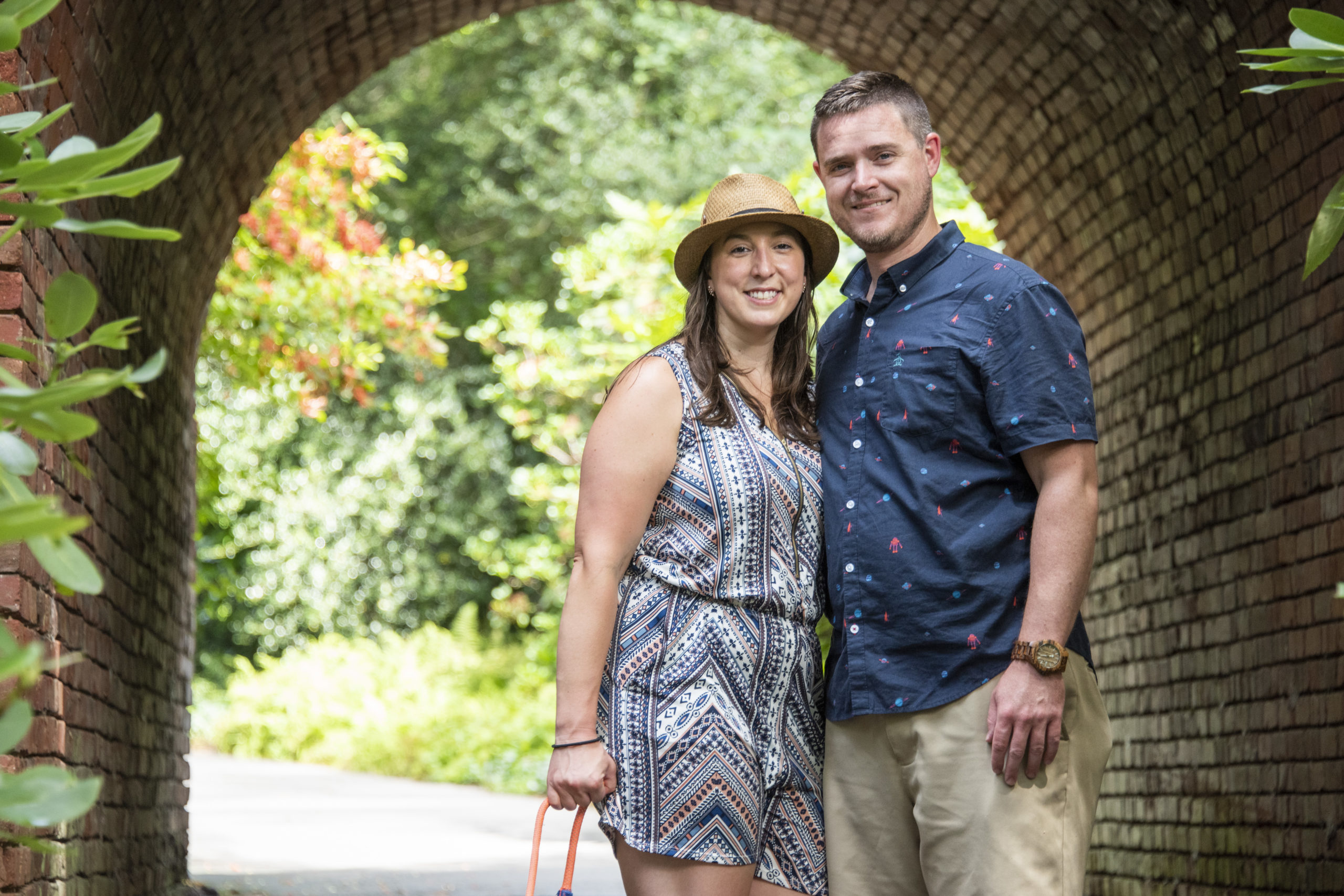 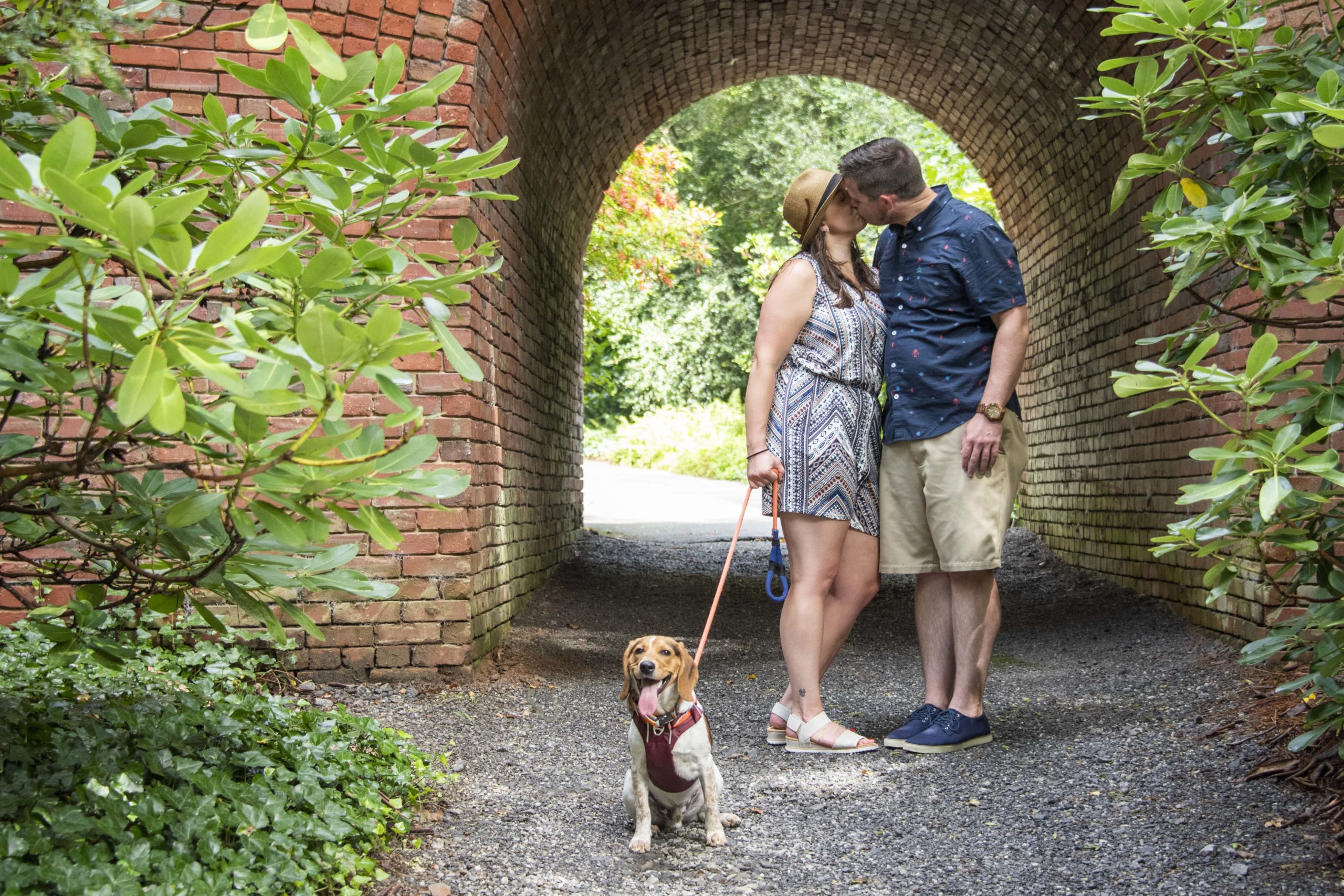 We actually met 13 years ago, back when we were seniors in high school (April 20, 2007 to be exact). Seems crazy that we remember that date and that it was a Friday, but you’ll see why – just keep reading. It was the night of my 18th birthday party. My actual birthday was really the day before, but who can’t throw a party on a Thursday night in high school and have people actually show up, right? Anyways, Jason just so happened to crash my party that night with a friend who we later came to find out was a mutual friend of both of ours. At the time, we went to different high schools so had never met or crossed paths. He now admits (years later) that he spotted me from across the room and I immediately caught his eye. Instantly he knew he had to make his way over to introduce himself and find out who I was. So that’s exactly what he did.

He casually came up to me and said “Hi I’m Jason, can I have some of that?”. Me being my usual fiery self responded with something along the lines of “Do I know you? It’s my birthday and since I don’t know who you are, you have to go so bye”. Jason wasn’t fazed with my attitude and to my surprise, fired one right back saying “um ok, but just so you know, it’s really my birthday today so think I should stay”. In my head, I immediately was saying to myself “Whoa who does this guy think he is” and then thought “ok let’s see then”. I’ll admit I was really hoping to call him out for lying about it being his birthday, so I chuckled and said “oh really well if that’s so, let me see your license”. He smirked at me took out his wallet and handed me his license. Well what do you know it just so happened it really was his birthday and turning 18 that day as well.

I was shocked and kind of felt bad for being so rude right off the bat, so I apologized and told him we should celebrate together. Luckily he gave a little chuckle and told me he would love to to celebrate his birthday with me. And so from that moment on, on a Friday night way back in April so many years ago our story began. We always say it was not love at first sight but it secretly was. It wasn’t until years later we finally admitted it to each other and agree that the best decision Jason ever made was agreeing to go crash some random girl’s birthday party all those years ago.

Jason and I had planned a trip to the Biltmore Estate with our new puppy Fox that day. Jason was insistent for a couple weeks prior that we look nice to take a good family photo for our Christmas card. I thought this was odd since he typically doesn’t think of those types of things but just went with it. It was supposed to be a very hot summer day in NC so we planned to hit the road early to be the heat. Jason was even more persistent that we get there at 10 AM in order to get the best view of the Biltmore house and mountains. He had planned our itinerary for the entire day and I didn’t question it since it was nice to just go with the flow and not have to plan anything. We got up and got dressed in our nice clothes per Jason’s request and hit the road early since it was about a 2.5 hour drive. Our first stop of the day was to the Statue of Diana. Once we arrived, we parked and headed down the path to the top of the lawn where the statue was located. It had a beautiful view of the Biltmore house down the hill with the mountains in the back and perfect spot for a family Christmas card photo.

Jason asked a stranger near by if she’d take our picture and she agreed. We got in position for a photo and once smiling Jason abruptly stopped and said, “Wait let’s put on Fox’s new collar for the photo”. I was so confused since Fox was already wearing the new collar we had gotten him the day before. Jason quickly went over to our bag and came back with a bow-tie collar and put in on Fox. At this point I’m admiring the adorable collar he has just put on our puppy and didn’t even notice him down on one knee. I looked over and said to him, “Why are you shaking and getting all teared up are you ok?”. Clearly I was oblivious at this point until he went on with his proposal speech and opened up a ring box. I finally came to awareness and realized OMG it’s happening! He said the most heartfelt words and ended with the words every girl dreams of hearing from the man she loves, “Will you marry me?”. I of course said yes and he then put the ring on my finger.

After we shared a kiss, the stranger he had asked to take our photo, little to my knowing wasn’t a stranger at all, came up and handed me my phone back. She then went on to say, “congratulations to you both, my name is Jessica and I’m the photographer Jason scheduled to take some engagement photos of you both today”. I was shocked and so ecstatic in that moment. Jason had thought of everything to make it the most special day. We went around for the rest of the morning with Jessica taking photos around the grounds and house of the Biltmore. She captured every moment of our engagement flawlessly. Jason had truly planned and pulled off the perfect proposal.

The engagement ring is simple yet elegant with a single princess cut stone in classic/traditional high setting on a white gold thin band.

I wore a romper with bold colors/pattern with cream strap sandals (neither of which are typically my style since I’m usually more of a leggings and sneakers kind of girl) but Jason was very persistent we look both look extra nice that day so I just went with it. It was going to be super hot, I had just gotten a pedicure and knew lots of walking would be involved so was really my only option for what I deemed my comfortable classy look. Dressed up my romper and sandals with a fedora hat and added some rose gold accessories. Of which I included solid rose gold knot earrings, diamond heart necklace with rose gold setting/chain and rose gold Michael Kors watch. Jason wore khaki golf shorts with a navy blue short sleeve button down shirt, one of his favorites since it was space theme. Paired with casual navy blue dress sneakers and a wooden watch.

At this time we have not set a wedding date, but looking to do so soon.